Round 4: Kem Cards vs. Team TOGIT

The first of the exciting feature matches kicks off this round, as most of the teams with enough Pro Tour points have been...doing something else for most of the day. Mike Pustilnik, Ed Fear, and Ken Krouner are all playing on the same team together. On one end of the table is MikeyP, winner of GP: Las Vegas 2001, longtime Pro Tour regular, and genuinely nice guy. On the other? Your favorite MiseTings moderator, the infamous Ken Krouner. Mix in a little bit of Edward Fear, and do you have a recipe for success? We'll find out!

A face-off of white decks in this first seat, as Mike and Patrick are both playing with plains. Patrick plays an early Mistform Dreamer. "You've got the Whipgrass Entangler/Stinger thing going on?" Patrick asks. He answers Mike's white creatures with a bunch of blue ones of his own – Ascending Aven and Riptide Shapeshifter.

Mike plays a Daunting Defender to add to his small white army, but Patrick activates his Riptide Shapeshifter, naming, "Lord." He turns over seven lands before he hits his goal – his own Catapult Master.

Mike attacks with all his clerics and soldiers, taking Patrick to 6. Mike's at 18, though, and has very little to fear from a retaliatory attack. He untaps all his clerics and keeps them at home. "You going to actually win a game, Mike?" Ed says wittily as Mike's trying to make a blocking decision, and even though he laughs, you can tell he's still intensely focused on the game. Despite the banter of his teammates and sometimes his opponent, you can see the intense concentration that won Mike a Grand Prix in Las Vegas

Patrick's still making up his mind on how best to block Mike's attack and not die horribly. He ends up blocking only Glory Seeker with Catapult Squad, then killing Mike's Daru Stinger to survive another turn. He plays a Piety Charm, trying to make this trade less horrible, but ends the turn at three with few options. After another attack phase, Patrick plays some more Soldiers and removes Mike's Catapult Master from the game in response to Mike playing his fifth Soldier. After an amazing comeback, Mike is left with no options, and loses shortly after.

"I don't want your stinking tempo!" Ed says as his Stonewood Invoker gets Shocked. He's drawing nothing but land and finally plays Gluttonous Zombie, but Craig's offense is a little much for him. Attacking with Wirewood Elf and Spitting Gourna is pretty good, I hear.

Ed's fighting to stay alive, having only one blocker to Craig's massive attack force, and Gratuitous Violence makes things worse for Ed. "That's all I've got," he says, playing Timberwatch Elf. He blocks an attack with Twisted Abomination, his only option. 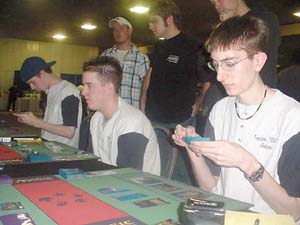 Ed's doing his best to recover in the middle seat, playing a bunch of creatures out to match Craig's. Ed can't keep up with Craig's constant barrage of creatures, and concedes shortly after. "I know I was worried," Ed says sarcastically.

It's black/red versus red/blue at the third seat as Ken's the only one with a creature on the table. Both players are off to a slow start with only one creature apiece. However, Adam's Bane of the Living beats Ken's Sage Aven. With more creatures on the board, the match is favoring Adam over Ken.

Things are very one-sided out at the end of the table, as Adam's left with an army after combat and Ken loses his only creature. "I think you played it right and it cost you," Adam says, and Ken agrees. Adam wins quickly, and when asked to what he attributes his victory, says, "Infinite two-for-ones."

In this game, each player opens with a couple of white guys. Both Patrick and Mike have a Battlefield Medic apiece, setting up a long, drawn-out game filled with unfruitful combat. Come on, guys, we want to see things die!

Patrick and Mike have a whole bunch of clerics, soldiers, and other white creatures out. This could take a while, unless Patrick's blue flyers can punch through Mike's defense. It doesn't look likely, though. Mike ends up being the aggressor and attacking first, but then Patrick activates his Shapeshifter again. Once again, he turns over lots of land (six this time) until he finds the Catapult Master. It turns out that Patrick has enough Soldiers to activate the Master, and starts removing Mike's creatures from the game. Mike attacks futilely, but there's not much that he can do.

Ed leads with Carrion Feeder, then contemplates his options. He probably shouldn't have bothered with thinking for so long, as Craig plays out a few morph creatures and a Goblin Sledder. Ed kills the Goblin with a Crown of Suspicion, but can't seem to find another creature or more than four lands. 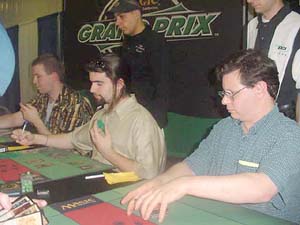 Ed might be dead in a minute if he can't draw some more creatures to deal with Craig's amazing offense. "Attack with just him," Ed says in a silly voice, turning Carrion Feeder sideways. A puzzling play, but it works out in his favor.

Craig's army is almost entirely face-down – the only creature that we know the identity of is Needleshot Gourna. He plays more and more creatures to join it, until he has to stack them up to fit on the playmat. Ed can't overcome Craig's overwhelming number of creatures, and he loses soon after as well. "I could've waited a turn to play Ambush Commando, but he had the Shock to kill it." "I had SO much defense," Adam adds. Ed concludes, "It was a good match, though."

Ken starts the second game with a morph creature, which Adam quickly dispatches. Soon, the board looks almost entirely equitable, with each player having one morph and one normal creature. I'm not sure, but I get the impression that Adam's deck is better than Ken's; the MiseTings moderator looks extremely unhappy with the hand he's been dealt. After a bunch of creatures trade with each other, they're each left with one creature again and eighteen life apiece. Unfortunately, Adam ends up on the winning end of more than a few combat phases, and Ken scoops his cards up.