Round 4: Kyle Rose vs. Marco Blume 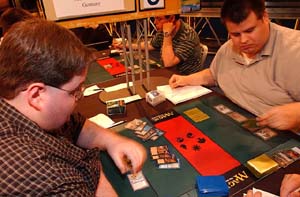 This Texas-sized Feature Match was a rematch of the 1999 World Team Championship Finals. Kyle Rose, the US Champ that year, defeated Marco Blume, Germany's Champion, when Blume made the famous error of playing a Covetous Dragon with no artifacts in play.

Blume has gone onto better thins in his Magic career, most notably as a member of the two-time PT winning Phoenix Foundation. Rose's recent successes in Magic are also in the team format—his "The Jokas" took first at GP New Jersey—but his real recent claim to fame in the world of card games is in poker, where his professional career has made him quite wealthy.

Blume is running the German version of the Reanimator deck, and Rose is with Gush-a-Tog, the new hybrid of traditional Psychatog and some sort of Hatred-simulating card drawing craziness.

Blume won the roll and announced his intention to play first.
"That's fairly important," replied Rose in his slow drawl.

Blume had to mulligan his opening hand. Rose looked at his own hand, set it back on the table, and sat there stone-faced as Blume pile-shuffled and riffle-shuffled, drew six, and said "keep." Rose then said he was going to mulligan as well. Too often players give away the fact that their own hand is bad as the opponent mulligans, which can allow the opponent to keep a land-light draw. But not Rose, who could probably keep a straight face during an air raid. 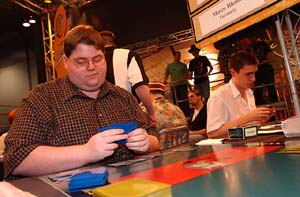 Blume's end-of-turn Entomb was nailed with a Force Spike, and it looked as if that would set the tone for the whole game. It got worse for Blume when he missed land drop number three for a few turns. Rose was just sitting there doing nothing, and didn't counter Blume's Vampiric Tutor, which fetched an Island.

Blume Duressed Rose on the next turn, and Rose let fly with a flurry of card drawing—Intuition for Accumulated Knowledges, draw three, Gush for two more, and then... Duress resolved. Kyle was holding another Gush, two Diabolic Edicts, an Engineered Plague, and six land. I wondered what match I was watching; the 'Tog deck had no 'Togs and no counters, and the Reanimator deck had no fatties in the graveyard.

Rose Gushed into Intuiton, and Intuitioned for three Psychatogs, then played one of them. Blume managed to Careful Study a Verdant Force and Multani, Maro-Sorcerer into the bin, and Exhumed Multani (and a 'Tog). The second Exhume was countered by Rose, so the Verdant Force stayed dead.

Rose had an Edict, though, and killed Multani, then swung for lethal damage with the 'Tog.

Rose sided in some Duresses and Treachery, but had no anti-graveyard cards.

Marco led off with a turn-2 Duress to play around Force Spike, and it worked. He took Rose's Edict, leaving him with Intuition, Force Spike, and a 'Tog. He Duressed the Intuition on the following turn, and saw a Treachery. But he didn't seem to care, as he Entombed and Reanimated a Verdant Force when Rose tapped out for the 'Tog.

Mesmeric Fiend came down on Blume's next turn, taking the Treachery, and that was about it. 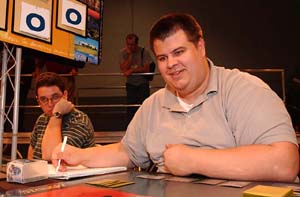 Between rounds, Marco showed off his Saproling tokens, which were wooded hexagonal game pieces from a German game called "The Hive." He said it was like chess except with no board, and you can play it anywhere. Sounds interesting.

Rose mulliganed in the third game and look sad when Blume Careful Studied a Visara the Dreadful into the graveyard. But Blume had no immediate reanimation spell, and Rose had time to Intuition for AK's to draw a few cards. Mesmeric Fiend was Mana Leaked, and Exhume, which Blume had to go for, was Spiked.

Blume's desperation play was Llawan, Cephalid Empress, which Rose had to read. He then asked, "If I were to somehow gain control of this creature, would it still affect me?" The answer was no, so Rose cast Treachery on it, and followed up with a Psychatog. Blume drew nothing useful, and died three turns later.