n one of the biggest powerhouse matchups yet, Masashi Oiso and Rogier Maaten faced off against Jon Finkel and Josh Ravitz. The Japanese and Dutch Magic pros have grown close in the last few years, communicating through MTGO and various instant messengers. Maaten added, "If I need a deck for a Grand Prix, I just IM Kenji." A lot of Magic players would love to be able to say that. 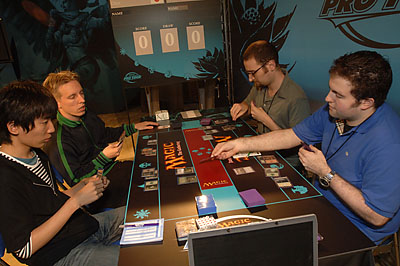 Unlikely duo Masashi Oiso and Rogier Maaten square off against blasts from the past and fellow undefeateds Jon Finkel and Josh Ravitz.

Oiso free-mulliganned then mulliganned twice more down to five. Finkel and Ravitz both free-mulliganned, then Finkel threw back a seven-card hand of "Lightning Axe, Dead // Gone, Rathi Trapper, Swamp, Mountain, Island, Island." The hand would be pretty reasonable in a single-player draft, but this format's decks will tend to be more powerful than "normal" draft decks, and require a higher standard. The hand also lacked the madness-discard interactions of which the deck is capable.

The Americans won the toss and opened it up with Mire Boa and Looter il-Kor. Oiso answered with Deathspore Thallid, which could kill them both if it just gets enough time.

Ravitz adds Saltfield Recluse while Finkel made another discard enabler in Bonded Fetch. While the Mire Boa's regen shields were down, Maaten cut off its life with Orcish Cannonade, sending his own team to 24 life. Oiso added Hedge Troll, but had only Forests and Swamps so far, making the Hedge Troll merely a Headless Horseman.

Right on schedule on turn four, Ravitz kicked up a Thornscape Battlemage. He faced a choice that paused the team: kill Hedge Troll while it was still small, or kill Deathspore Thallid while it still had just one counter? A brief conference, and Deathspore Thallid suffered the Thorny fire. Meanwhile, Finkel looted out a Grave Scrabbler to return a previously looted creature, then played Dream Stalker to return the Grave Scrabbler, ready to run it all again.

Maaten made a morph, while Oiso could only sit back on the mana

, making his opponents wonder about Tendrils of Corruption, Sudden Death or some sort of flash character.

The Americans sent the Looter il-Kor and Thornscape Battlemage in again for damage. (Hedge Troll was scared of blocking because of Ravitz' Saltfield Recluse.) Using the Looter's madness, Finkel re-upped on the Grave Scrabbler that he returned with Dream Stalker, this time targeting his teammate's Mire Boa, because Grave Scrabbler's template isn't quite like gravedigger's. In fact, Grave Scrabbler's "futuristic ability in the future frame of Future Sight" template allows you to return a creature from any graveyard to its owner's hand-a very Two-Headed-friendly functionality. Grave Scrabbler's version of the classic Gravedigger ability isn't in "current-time" Magic quite yet, but look for R&D to explore increasing numbers of 2HG-friendly templates in the years to come. Finkel finished by adding Urborg Syphon Mage, benefiting from the reduced cost of Grave Scrabbler's madness option. 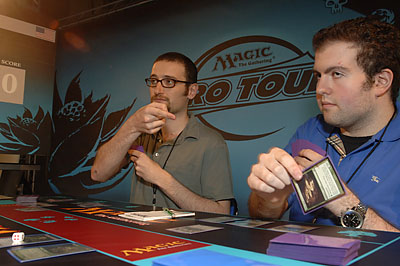 and a facedown morph) and Oiso (with

and a Hedge Troll) both played nothing, but they had some instant surprises in store. I couldn't resist and went around to look at Oiso's hand: Strength in Numbers, Sunlance, Big Game Hunter, and Viscid Lemures. Two uncastables, and two "wait for the right targets." Maaten was holding back all kinds of gas: Ovinize, Erratic Mutation, Aquamorph Entity, Aether Membrane, and Fomori Nomad.

On turn six, all hell broke loose. Looter il-Kor, Thornscape Battlemage, and Mire Boa with Saltfield Recluse backup all attacked into the Oiso/Maaten team of unpumped Hedge Troll, facedown morph, and nine crucial untapped lands. Maaten blocked Battlemage with his morph and troll. He flipped up Fledgling Mawcor, pinging the attacking Looter. putting Oiso/Maaten up one card. Despite the Recluse, that Battlemage would still die to the double block, trading one-for-one. Then Maaten played Erratic Mutation to kill the attacking Mire Boa, while Oiso pitched in with Strength of Numbers to save the blocking Mawcor. Amidst all the bloodshed, the Japanese-Dutch team was still up a card on the turn. But then Finkel used Bonded Fetch to madness out (+1 card) a second Grave Scrabbler, bringing back Ravitz's Thornscape Battlemage (+1 card), which came into play with kicker killing the Mawcor after all (+1 card) In seconds, Oiso and Maaten had gone from +1 card advantage on the turn to a savage -2.

Determined to find a way back, Oiso topdecked a land and his team took it up a notch with Viscid Lemures and Fomori Nomad. At end of turn, Finkel drained for 4 life life with a 2HG-pumped Urborg Syphon-Mage, again benefiting from the reduced mana cost of madness-Grave Scrabbler. This took the Americans to 34, with the Japanese-Dutch at 14.

Smelling blood in the water, Finkel pitched Lightning Axe and Island to take out Fomori Nomad, and sent a suicide squad (Grave Scrabbler, Grave Scrabbler, Thornscape Battlemage, and Dream Stalker) into the larger Hedge Troll and Viscid Lemures just to hammer the opponents' life total and bring them into Syphon-Mage range. The Japanese-Dutch team fell to 10. Ravitz kept the pressure on with Llanowar Empath, fishing up and playing Magus of the Library. The 6 plays of comes-into-play creatures on the Finkel-Ravitz side had been totally devastating. 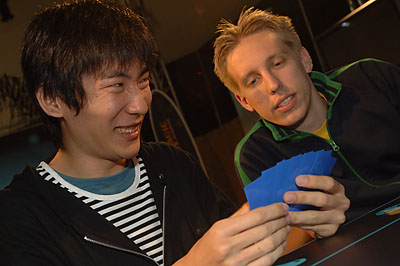 Maaten and Oiso finally choked off the discard outlets with Oiso's Plains and Sunlance on the Syphon-Mage, while Maaten played snuck a Leaden Fists onto the Bonded Fetch when it tapped. The Syphon-Mage spellshaped another 4 life on the way out, taking the score to 6-38. But with a 1/5 Aquamorph Entity, and all the draining stopped, Oiso and Maaten seemed to have stabilized.

Turn 8: Finkel found a Trespasser il-Vec and discarded on the following turn to give it shadow, but Ovinize brought it back to the real world, where it found a welcoming committee of triple blockers. Dawn Charm saved the Trespasser's brutish life for a few short seconds, but a nasty Ghostfire finished it off.

With Trespasser halted, Ravitz went with another "discard for damage" creature: Prophecy stowaway Jolrael, Empress of Beasts. Up against the wall, Maaten flipped Shaper Parasite, to give Jolrael +2/-2, but did it for the power change rather than the toughness-the pump opened the door for Oiso finally to play Big Game Hunter, comboing Jolrael off the table.

Oiso knew his team couldn't fight off these offensive weapons forever, and he swampwalked his Viscid Lemures in for a point past Saltfield Recluse. Ravitz continued the Onslaught with another chunky offensive threat: Lucent Liminid.

At 6 life and desperate to stay undefeated, Maaten again came up with an answer: Aether Membrane to block Lucent Liminid. But it was then that Lucent Liminid took charge of the situation by donning the oft-scoffed at Mantle of Leadership. Bonded Fetch and Stingscourger appeared to pump the Liminid up to 7 power, and Stingscourger bounced the Aether Membrane to clear the way for the flying enchantment's final assault.