Round 4: Marco Blume vs. Franck Canu 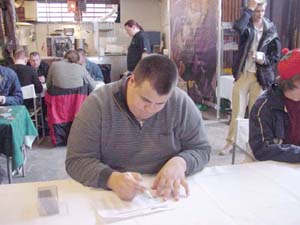 Marco Blume is a former German Champion and part of the Phoenix Foundation team that won Boston a couple of weeks ago. Unfortunately his sealed deck for this tournament is not very powerful. He had to play blue, easily the weakest colour in the set. His opponent Franck Canu is a French player with a number of high finishes.

With the number of power cards in Onslaught it was a very humble start to the match. Marco Blume had not had the best of luck with his sealed deck and was one of the few people playing islands. His Riptide Biologist didn't look so good as Canu wasn't playing green spells.

The early plays saw Blume follow the Biologist with a Daru Healer and Ghosthelm Courier. He then brought a couple of Morph guys in face down. It was unlikely they'd ever be attacking as the Frenchman had been fortunate enough to open three Daru Cavalier. They fetched each other out in sequence until Canu had a first-striking wall of 6 power to protect the ground.

Blume went to the skies with an Aven Soulgazer that Canu matched with an Aphetto Vulture. The game settled into the familiar Onslaught limited pattern of a clogged-up ground with evasion creatures racing.

Blume summoned a Crafty Pathmage to give him another possible evasion creature. Canu tried to match by boosting his Vulture with an Improvised Armor. Blume effectively countered it with a Mage's Guile.

Realising he had to get busy Canu sent in all three Cavaliers with an Anurid Murkdiver in support. As Blume had two Daru Healer the result was that Canu got six damage through at the cost of one of the Cavaliers. Blume's Soulgazer flew back over and Canu was now down to 8 life and behind on the race. Blume was at 14.

The Frenchman had done enough damage with the earlier attack though. In his turn he cast Dirge of Dread and gave all of his monsters Fear. Blume had no black creatures with which to block Canu's alpha strike and the damage was exactly enough to kill Blume even with two Daru Healer in play.

Canu elected to go first. Yes, it should have been Marco's choice but as he was happy with Canu going first he let it pass. Both players traded their first Morph creatures and Canu tried to get in early beats with a Spined Basher enhanced with a Crown of Fury. Pacifism slowed that down and Marco Blume started swinging back over the top with a Dive Bomber.

A Sparksmith showed up for Canu but without more Goblins in support it wasn't going to bother Blume much as he had no 1 toughness monsters in play and a Daru Healer. 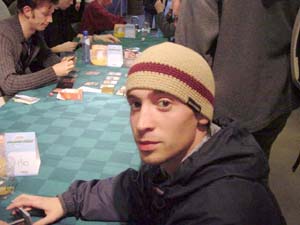 An Erratic Explosion took care of the Dive Bomber but only after it had caused Canu three mana burn as he'd mistakenly tried to cast it as an instant. Blume replaced it with a Soulgazer then boosted it with Improvised Armor. Choking Tethers ended the game a turn early.

Canu chose to go first again and had a horrific start as his deck choked on two land for a couple of turns. The third wasn't too long in coming and a Spined Basher appeared to stare at Blume's two Morph creatures and a Daru Healer.

The Frenchman killed the Healer with a Misery Charm and dropped a Sparksmith, only for Blume to trump it with a Lavamancer's Skill. The goblin headed off to the graveyard and was followed by the Spined Basher as Blume started to swing with his army of facedown gray ogres.

Land still wasn't forthcoming for Canu and the morph creatures knocked him down by four. A Pacifism on his only blocker and suddenly he was down to six. Finally the Frenchman hit a land clump and reached the six land he needed to Slice and Dice the board.

Blume recovered strongly with two Sparksmith and a Glory Seeker. Canu wasn't able to keep a blocker on the table and the game ended very quickly.