Round 4: Masaya Mori vs. Tsuyoshi Fujita 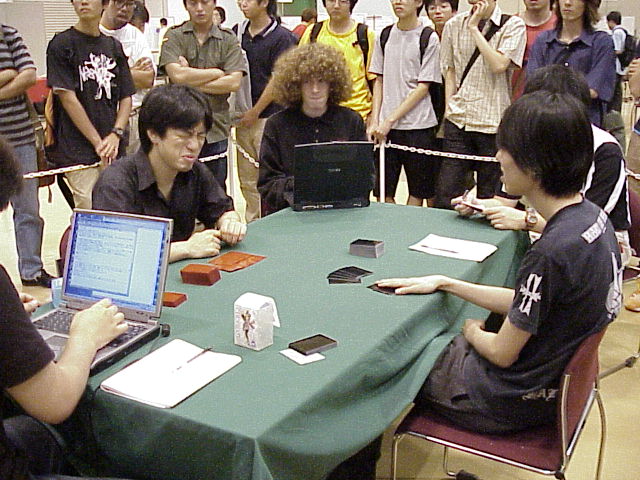 Round 4 is always Go Time for Feature Matches, because that's when the heavyweights who have spent three rounds resting on their byes are forced into the thick of competition. Grand Prix -- Kobe proved to be no exception. As soon as the pairings were posted, Pro Tour -- Tokyo finalist Tsuyoshi Fujita could be heard screaming his ill-fortune across the hall. He'd been paired against two-time APAC Champion Masaya Mori.

The Feature Match area was surrounded by two loops of spectators. Not only was this match going to be an exciting battle of professionals, but just next door Kenichi "The Boss" Fujita was staring down Itaru Ishida of Panzer Hunters. It was an all-star affair.

Mori mulliganed, and Fujita kicked things off with a turn-two Utopia Tree. His acceleration ran out, however, and he was forced to play a mere unkicked Kavu Titan. Mori assembled a group of three very fine lands. Fujita added to his "pressure" with an unkicked Thornscape Battlemage. Mori Harrowed into four basic land types.

He made a Sunscape Familiar that did a fine job of blunting the force of Fujita's bears. Fujita tried to maneuver out of his pickle with a second Utopia Tree, but was still sluggish at best. Fortunately, Mori was keeping a similar pace. This gave Fujita time to find a Lay of the Land for a mountain. He ran his army at Mori and tired to take down the wall with a second Thornscape Battlemage. Mori Dromar's Charmed it.

Mori still played passive. Fujita brought a discard-kicked Thunderscape Battlemage. Mori responded with Fact or Fiction, getting Fertile Ground, island and Evasive Action over Fact or Fiction and Collective Restraint. He ditched the Ground and Reviving Vapors, then calmly untapped and played the second Restraint from his hand. 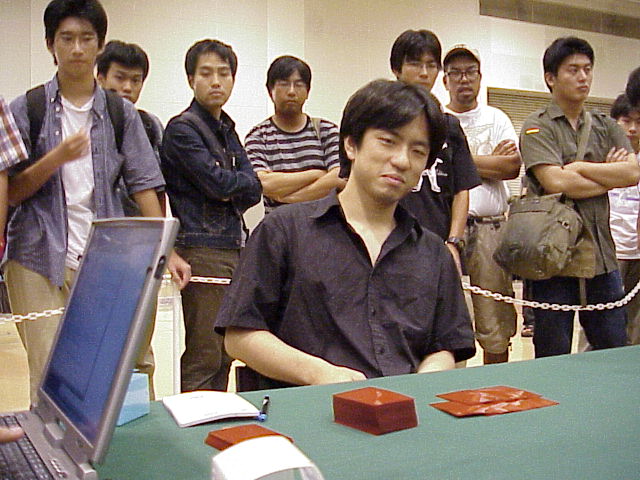 Fujita kicked up his Thunderscape, knowing Mori had the answer in Evasive Action, but needing to press his countermagic. He watched as Mori pulled four cards with Allied Strategies before handing him the turn again. Fujita tried a third Thunderscape Battlemage, but again Mori had Evasive Action. He untapped into a mountain and a second Strategies. Fujita sighed.

However, he wasn't out of it just yet. He tried for a truly savage Shivan Wurm. Mori thought hard before coming up with the Dromar's Charm. His next play was to tap seven for Legacy Weapon. Fujita came over the top with a second Wurm and Mori frowned. Fujita had just enough mana left over (thanks to a Thornscape Familiar) to replay the Thunderscape Battlemage, taking out the Restraint and knocking Mori to seven.

Mori drew and his frown deepened. He passed the turn back to Fujita. The Weapon took out the Wurm, but Mori was at one. Fujita's Crypt Angel brought back a Battlemage, and Mori scooped up his cards.

Both players had early acceleration in game two, Mori with Fertile Ground and Fujita with Thornscape Familiar. The Ground let Mori Fact or Fiction into Harrow and Swamp over Obliterate, forest and Sunscape Familiar, taking pain from the Familiar and an unkicked Titan.

Fujita tried for the fences early with Blazing Specter, but Mori had Evasive Action. Mori untapped and kicked up a surprising Thornscape Battlemage that took down the Familiar and stood in the way of the Titan. 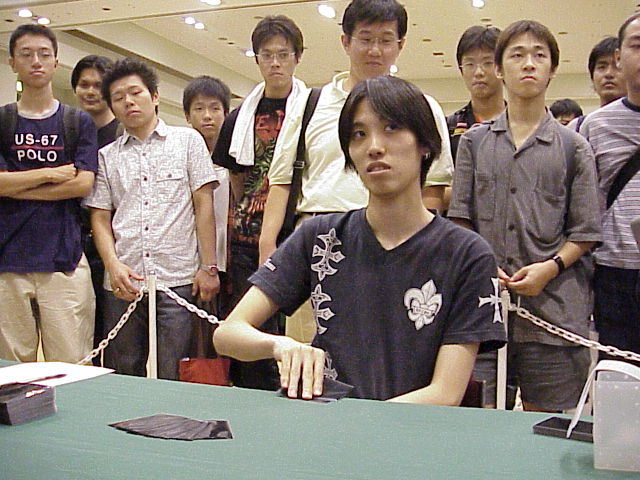 Unfortunately for Mori, Fujita was bringing the fight to a different front. Blazing Specter soared overhead. Mori played Fact or Fiction to protect the two cards in his hand. Fujita split the cards as he turned them over: Questing Phelddagrif in one pile and island, swamp, Elfhame Palace and Sunscape Familiar in the other. He took the pile of four and lost the Palace to the Specter.

Mori had answers for each of Fujita's successive plays, matching Penumbra Bobcat with Sunscape Familiar and Crypt Angel and Thornscape Battlemage with a pair of Evasive Actions. However, the Specter had savaged his hand and life total. Another Thornscape Battlemage came down unhindered and shot Mori in the head. Things were desperate for his life total of two.

He untapped and played Allied Strategies. The five cards gave him plenty of options to consider, but no matter which way he counted it, he still ended up dead. He dropped his hand face-up on the table and extended the hand to Fujita.

2 Lay of the Land

2 Lay of the Land