Round 4: Matt Rubin vs. Ben Rubin 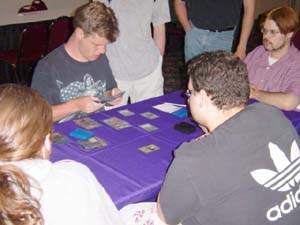 When the featured matches for this round were announced, Aaron Forsthye took a great deal of pleasure of calling Matt Rubin Ben Rubin's son. The room burst into laughter, and soon both spell casters had met up at the feature match area. New York player, Matt Rubin, is fresh off a top eight at United States Nationals, and was playing the standard bearer of the format, Mono Black Control.

Former Invitational Finalist Ben Rubin was with the same deck. The players shuffled, and shuffled some more. Finally after a bit more shuffling, the game was on with Ben Rubin winning the dice roll and opting to play first.

Both players started off with the obvious swamp, go. They made lands, and the action really started to heat up when Ben Rubin hit a third turn Rancid Earth on one of MattR's swamps. MattR unfazed continued to play lands and the next play was a Mirari by Ben Rubin.

Ben looked like he was going to take control of the match when his turn decimated two of Matt's swamps. MattR played a main phase Tainted Pact to get a land, played it and hopelessly passed turn. Looking to assert more momentum, Ben showed off his lone main decked Mind Sludge, and emptied MattR's hand. He followed this up with a solid gold Nantuko Shade, and it looked rocky for the New York player.

MattR however, was not about to go quietly. Flipping over an Innocent Blood, he ridded the table of the insect, and passed turn back to Ben. Ben asserted himself as the dominant player, and forked a Tainted Pact, which netted him another Shade and a swamp. After he cast the Shade he passed turn. MattR was able to deal with this shade almost as quickly as the first, and it was back to a grand game of Draw, Play Swamp, Go. 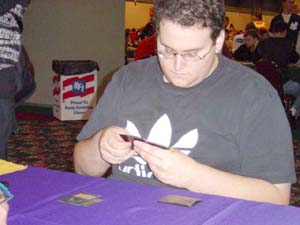 The monotony of the game was broken when Ben Rubin cast a massive Skeletal Scrying and forked it. Losing fourteen life seemed like a small deal when he drew the fourteen cards off of the spell. At the start of his turn he had a huge amount of cards in his hand, nineteen to be exact, and finishing off MattR seemed like it was in the bag. Ben forked a Diabolic Tutor, forked a Rancid Earth (which left Matt with two lonely swamps in play.) and watched as Matt floated two mana to Scrye at the end of his turn. Matt simply drew his card, and passed turn back to Ben.

Ben was looking to deal the final blow, and with another forked Tutor it looked like it was about to be delivered. Casting the freshly ripped Haunting Echoes, Ben was able to see just how well MattR was set up to deal with his final assault. The echoes removed all of MattR's edict's, mutilates, rancid earths, and most everything else in his deck. What it did not remove however, were the final two Innocent Bloods left in MattR's hand. Ben cast a Faceless Butcher, and followed that up with the final Nantuko Shade in his deck.

MattR answered this turn with no lands, and used his only two swamps to cast both Innocent Bloods that remained in his deck.

For Ben Rubin it was just about over. A few Rancid Earths from MattR left Ben smoldering at four life, and when Ben was unable to find an answer to MattR's Screams of the Damned, he conceded.

Both players side boarded in the standard Braids, Mesmeric Fiend sideboard plan, and after some more shuffling, the second game was on. 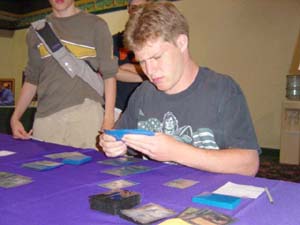 After taking a quick trip to Paris, Ben Rubin kept his six, and played a land. Matt came back with a swamp of his own and passed. Looking to go for the throat as quickly as possible, Ben swung out with a Nantuko shade, and passed back to Matt. Matt made a simple Mesmeric Fiend which took away the only non land in Ben's hand, Tainted Pact. Ben however, ripped Rancid Earth off the top, attacked for two and gained tempo over the other Rubin when he destroyed a swamp of Matt's. Matt drew, made a land and attacked back for one. He followed this up with a Shade of his own, and it was off to the races. Going to the dome Ben attacked for six points of damage, and passed back. MattR swung back for three, played a land, and Rancid Earthed a swamp away from Ben. Ben attacked back for three, and played another earth, which left Matt at a mere three lands. A Tainted Pact from Matt Rubin revealed an Innocent blood, and after he attacked for another three, the blood of the innocent came down, and killed off a Mesmeric Fiend of Matt's and a Shade from Ben. Ben played his fourth land, Pacted and cleared the board with a Chainer's Edict.

Matt played a fourth land, and decided to cast Braids. Ben had no answer, and after a Zombie Infestation hit play for Matt, Ben shuffled his hand back into his deck.