Round 4: Matt Vienneau vs. Benedikt Klauser 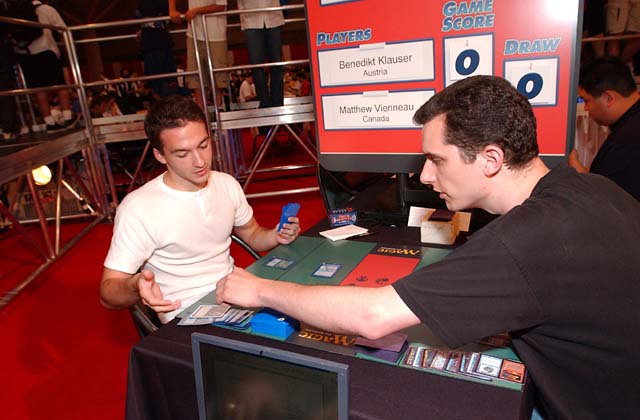 Before the match, Klauser asked if he could say "hi" to his girlfriend, Maria, who's watching on the internet back in Vienna. His opponent, Canadian Matt Vienneau wished he had a girlfriend to say "hi" to and asked me to say that anyone interested in the job should contact him. Both Vienneau and Klauser have stumbled out of the starting blocks, with 1-2 records. It could be long weekend for whoever loses this match. 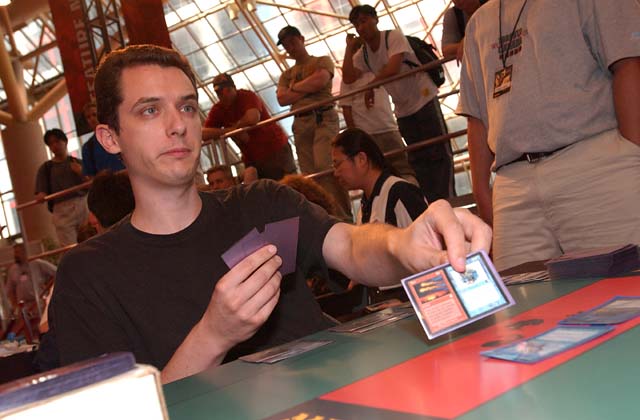 Klauser is running a Blue Skies deck that he got from Team Godzilla. He played a couple of early 3-power threats, Thwarted Vienneau's first attempt to deal with one, and then set about the task of figuring out what Vienneau's deck actually tried to do. Vienneau had nothing but blue and black lands plus assorted controllish cards like Probe and Recoil. The final clue came when Vienneau used Ice to tap a Rishadan Airship - aha - blue-black-red control in the process of getting color screwed, it all made sense suddenly. Vienneau played out a Nether Spirit to block Chimeric Idol and with just three points of life left he finally drew a Shivan Reef. He pointed the Fire half of Fire/Ice at Klauser's Airship and Klauser discarded his entire hand to a pair of Foils attempting to defend his Airship. Vienneau's last card was an Undermine, and the Airship died. Suddenly both players were in topdeck mode with no cards in their hands. Vienneau won the topdecking war, helped out in part by a Probe. Klauser couldn't keep a creature in play and Nether Spirit just kept attacking him until he was dead.

Klauser went first in game 2 and forced a turn 3 Static Orb onto the table, sacrificing Spiketail Hatchling to counter Vienneau's Counterspell. Control decks have trouble using all their card advantage cards when they can't tap mana, so they both knew this should favor Klauser. Vienneau did manage to Fire away Klauser's first Airship and he played out a pair of Nether Spirits, seemingly to hold off Klauser's Chimeric Idol. Vienneau had other ideas, though, and he sent the Spirits in to attack. Klauser declined to block until he had a second Idol. Then when Vienneau sent in both his Spirits, Klauser used both a Thwart and a Foil to defend them from Vienneau's removal. Vienneau was unable to kill either Idol and they each got to block a Nether Spirit! Suddenly both Vienneau's Nether Spirits went to the graveyard and Vienneau realized he had just thrown away the game. (Since there were two Spirits in the graveyard, neither one could come back into play.) Vienneau scooped immediately upon realizing his mistake and started shuffling up for game 3. He explained later that, in his head when he worked it all out, he was only planning to attack with one Spirit. 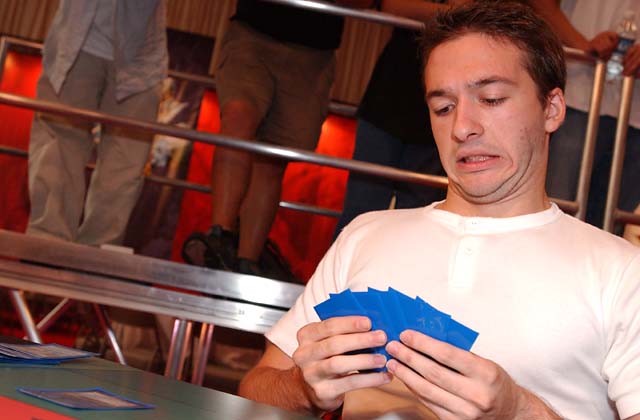 Klauser forced Static Orb into play again in game 3, using a Thwart to defend it from Memory Lapse. Vienneau bounced it with Recoil and got to untap his land. Vienneau Recoiled it a second time, but he still couldn't' draw and permission and the Orb eventually stuck in play. Vienneau couldn't stop Klauser's Thwart of a potentially devastating Fire either (it was targeted an Airship and a Hatchling). Eventually, Vienneau tapped four mana to play Fact or Fiction during Klauser's upkeep. Klauser split the piles in a very interesting way: Terminate plus island or Counterspell, Counterspell, Gainsay. Vienneau was at 8 and Klauser had only a Spiketail Hatchling in play. He bribed Vienneau into taking all the permission, which Vienneau did, and then Klauser played out an Airship. Vienneau countered, of course, but that left him tapped out and Klauser sacrificed his Hatchling, effectively upgrading it into an Airship. That left Vienneau on a 3-turn clock and his deck failed to deliver up any more removal.