Round 4: Michael Franklin vs. Bryan Marella 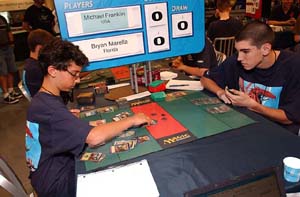 Michael hails from Newport Beach, California. "I ground in yesterday with this deck, but I changed my sideboard before today," he added. This is his first big tournament. "I want to say hi to my friend Bradley Neutell - he showed up and helped me out a lot yesterday," Michael told me before the match.

Bryan is here from Tallahassee, Florida, with both his parents in tow. This is his second big tournament, as he attended GP: New Orleans at the beginning of the year. "I'm saying hi to Ben Carroll and Aaron Been – they helped me playtest for this tournament a whole lot. But it didn't help, because now I'm 0-3!" Bryan joked while shuffling.

Michael led with a forest and a Birds of Paradise, which was quickly joined by another Bird and another Forest. Meanwhile, on Bryan's side, a pair of swamps sat forlornly with nothing much to do. Michael's third-turn play is an Opposition.

Bryan countered with a Chainer's Edict, killing one Bird. Michael was unfazed, and casually played a Static Orb to go with that Opposition. After four turns, Bryan still didn't have any creatures in play, and Michael began tapping Bryan's permanents. Michael's next play was a Squirrel Nest on his forest.

"During your upkeep, I'll make a Squirrel," Michael said, "and tap your swamp." Bryan answered by floating a black mana and cast a Smother to kill the Squirrel. However, Michael repeated the combo on the subsequent turn.

Bryan looked fairly despondent as the Opposition-Static Orb combo locked into place on Michael's side. Michael actually attacked with one of his Squirrels, which brought Bryan down to 19 life. Bryan shuffled the cards around in his hand and looked at the board with a puzzled expression. The only non-land spells he's played this game have been Smother and Chainer's Edict.

Michael attacked with the Squirrels, and played a Wild Mongrel after his attack phase as well. Bryan played his third spell of the game – a Mutilate! However, Michael had all the answers, as he pumped his Mongrel twice and then finally ditched a Circular Logic to the Wild Mongrel to counter the spell. This was masterfully played, as Michael had had only two cards in his graveyard up to this point.

Michael attacked for three with a Squirrel and the Mongrel, then passed the turn to Bryan. During Bryan's upkeep, Michael tapped four of Bryan's swamps. He attacked again, for four this time, and played a Phantom Centaur to add to his army.

When Michael attacked again (with all of his Squirrels this time) Bryan scooped up all his tapped Swamps.

Bryan's first land was a Swamp, and he played a Duress on his second turn. Michael's hand contained a couple of Circular Logics, but Bryan decided that the Opposition Michael held was the tastier target. He then followed the Duress with a Cabal Therapy, naming Circular Logic – an excellent play that ripped three cards from Michael's hand.

Michael played a Wild Mongrel and attacked on the next turn, then played a Phantom Centaur. All was for naught, though, when Bryan played his Mutilate to kill all of Michael's creatures. Michael then went to 18 to play an Opposition, one of three cards left in his hand. He then played a Birds of Paradise and began tapping Bryan's swamps. 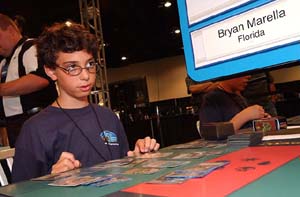 Bryan played a Cabal Coffers and passed the turn, seemingly distraught by this state of affairs. He knocked on his deck twice, hoping to pull something good off the top, and said, "Wow," when he played another Swamp.

Michael added another Birds of Paradise to the table, and tapped a Swamp and the Coffers during Bryan's upkeep. Bryan next played a Nantuko Shade, and passed the turn; but Michael played a Krosan Reclamation at Bryan's end step, and targeted that Phantom Centaur.

When Bryan cast a Cabal Therapy, Michael tapped a blue and said, "Envelop," flipping the card up to show Bryan. Bryan just shrugged and played a Mutilate, to which Michael responded with Circular Logic. Two blue and two green later, Michael was the proud controller of a Phantom Centaur as well as his aforementioned Birds of Paradise.

Michael attacked with the Centaur, bringing Bryan down to 13. At the end of Michael's turn, Bryan Smothered a Birds of Paradise, but Michael had a response. "Caller of the Claw?" he asked. Bryan just shook his head, but couldn't do anything to stop it. He then coolly counted out his swamps, laid them out nicely, and passed the turn back to Michael.

Michael attacked for seven with the Centaur and the Bear token, which brought Michael to 6. Michael tapped the Coffers and the Shade one more time during Bryan's upkeep, and then Bryan cast a Corrupt at Michael for twelve.

"What is he now?" Michael inquired.

"15/14," Bryan replied. He then asked to see Michael's graveyard. Bryan sacrificed the Nantuko Shade to flash back Cabal Therapy, but Michael had only Forests in his hand. Sure of his chances, Bryan then cast a Mutilate. When Michael played a Wild Mongrel, Bryan had the Smother ready.

Bryan's next spell, a few turns later, was a Diabolic Tutor, but he walked right into Michael's Envelop. Michael played a Llanowar Elf, and used it to tap Bryan's Coffers, but Bryan found another Diabolic Tutor for which Michael had no counterspell.

"Corrupt you?" Bryan asked tentatively. When Michael scooped up his cards, Bryan breathed a sigh of relief.

The first play of this game was Bryan's Duress, which hit an Opposition and left an Envelop in Michael's hand. Michael then played an Island to go with his Forest and a Merfolk Looter. Michael next enchanted his third land with a Squirrel Nest, but Bryan played an Engineered Plague. "I'll name Squirrels," he said.

Michael played a Wild Mongrel and passed the turn. He swung with the Mongrel for two on his next turn, and then played a Llanowar Elf to keep his creatures company. Bryan played another Swamp, bringing his total to seven, and cast a Duress – but Michael had the Envelop to stop the spell. 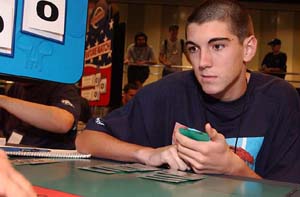 Going for broke with two cards in his hand, Michael played another Wild Mongrel. Bryan answered with a Cabal Therapy and named Circular Logic, which was one of the two cards in Michael's hand. He then cast a Corrupt for seven at one Wild Mongrel, bringing himself back up to 22 life.

Michael swung with the remaining Mongrel, bringing Bryan back to 20 life. On Bryan's turn, he played a Nantuko Shade and passed the turn. Michael declined to attack on his turn, and in fact, he also declined to play anything else. At Michael's end step, though, Bryan Smothered the Mongrel and then attacked with the Nantuko Shade. Michael blocked with his Llanowar Elf.

On his final turn, Bryan attacked with the Shade again, and Michael stuck the Merfolk Looter in front of it. "So it's a tie, then?" Michael asked the judges as he packed up his cards.