Round 4: Michael Turian vs. Phil Freneau 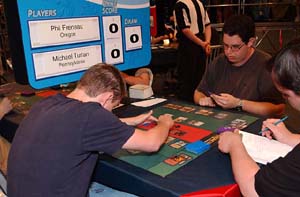 Mike Turian was not quite ready to present his deck. His count kept coming up at forty-two cards and he couldn't figure out what was wrong. Finally, as he went through card by card he realized that there were two too many lands in his deck. "I have decided to play forty cards today and not forty-two!" laughed Turian as he put the extra lands in his sideboard. "I actually got a game loss for that in Chicago against Herzog—I usually get someone to help me sleeve and it all goes horribly awry... But enough with the happy storytelling..."

Phil suddenly realized that he had the option of swinging the Red Zone play mat around so that his deck would be on the left. Turian put on his best arch-villain voice, "Curses, I almost had you!"

"I see. The 'happy storytelling' was just a ploy so I would forget."

Turian led off with a Glory Seeker and Freneau cycled a Thicket at the end of his turn. While he deliberated over his second land drop, Turian egged him on, "No land? That would be the most aggressive cycle of all time."

The Glory Seeker got in for two and was joined by a Zealous Inquisitor. Freneau answered with the underwhelming Nosy Goblin and tried to trade with the Glory Seeker but Turian had Astral Steel at the ready and Freneau's life dipped to sixteen. Freneau's next play was more impressive—Timberwatch Elf.

Turian had Rush of Knowledge but only drew three cards. Freneau played a Wirewood Elf and a morph. Turian kept drawing lands but that meant his Zealous Inquisitor was nigh unblockable. Freneau fell to ten and Turian played a Daru Stinger, amplifying it with a lone Deftblade Elite. He also played the 1/1 soldier.

Fierce Empath found a Needleshot Gourna and Freneau's morph got in and dropped Turian to eighteen. Another morph joined the party with the Needleshot in a holding pattern. The Inquisitor continued to chip away but Freneau was approaching critical mass and he sent his morphs into the red zone. Turian negated one with his Deftbalde. Freneau made his big play—a Kilnmouth Dragon.

Mike was still able to get the Inquisitor in for two but it was looking grim. Freneau sent in the troops—two morphs and the Kilnmouth and Turian blocked only a morph with his Deftblade. He adjusted his life total and then turned back to pay the mana for the Deftblade but Freneau only stared at him coldly, "He's dead." 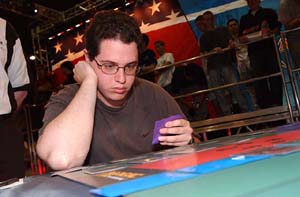 Mike nodded, "Then we are still in combat..." He used his Daru Stinger to finish off the morph—a Patron of the Wild. Rather than save his elf, Freneau kept the pressure on with an Enormous Baloth.

Turian was holding a fistful of lands. He sent all of his men into the red zone to see if there was any crack he could slip though but Freneau blocked appropriately and Turian shook his head and began to prepare for Game 2, "Even coming down from forty-two cards I still get mana flooded."

Turian opened with a Zealous Inquisitor and Freneau plopped down Timberwatch. Both players missed their next two land drops holding devastating turn four plays—Daru Stinger for Turian and Forgotten Ancient for Freneau. Turian did have his Dragon Scales and began to push his cleric into the red zone for three a turn.

Both players found land number four two turns later and Turian made a 4/4 Stinger—Freneau was at eleven. Forgotten Ancient came down but it was not going to be able to block the Inquisitor until some spells had been cast. A face-up Liberator put a counter on it but the evasion creature was just what Turian needed to finish him off. Freneau had the Needleshot but Pacifism and a Celestial Gatekeeper sent this one to Game 3.

While they shuffled, Turian marveled at the green cards that passed through Mike McGee and the ones that didn't. Apparently planning on playing in the JSS tomorrow, McGee's goal in the draft was to help out Gerard Fabiano. He seemed so caught up in his disruption that he took cards from him as well. McGee was Blue-Red all the way but took time to pick a Snarling Undorak, Needleshot Gourna and a handful of other cards away form Freneau. Most players at the table assumed he was going to play the green and were visibly stunned when he let Mythic Proportions and Forgotten Ancients saunter over into Freneau's stack. 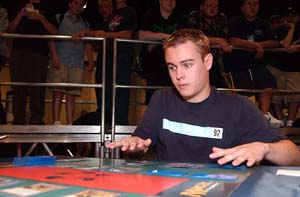 Freneau earned a yelp from the crowd when he played a Forest and cycled a Tranquil Thicket, "Modo!" shouted one onlooker. Turian had the first play—a Glory Seeker and it traded with Freneau's morph a turn later. The CMU'er was stuck on two lands and cycled an Akroma's Blessing futilely.

Freneau played another morph and passed the turn back to Turian who was trying to coax a land from his deck. A Daru Encampment off the top earned a heartfelt, "Yaus!" from Turian and he made a Whipgrass Entangler. An unmorphed Vigilante smoked it in combat on the next turn. After Empathing for a Bulvox, the Oregonian sent it back to Turian who wanted his deck to perform once more. "Yaussssss!!!!" A fourth land powered up a 5/5 Daru Stinger. Mike pointed at the Pearlspear Courier in the pile and grinned, "Look a combo!" One of his other revealed soldiers was another Stinger.

Turian was feeling pretty good and when Freneau played a morph and a Sparksmith he deadpanned, "Devastating." Turian dug in his pocket for change when he played the other Stinger showing the same soldiers as last time, "This guy is going to bankrupt me!"

Freneau had some good card too and he played a Kilnmouth Dragon. It wasn't big enough to get past seven counters over two Daru Stingers. To solve the problem he supersized the dragon with Mythic Proportions and flew over with a 13/13, trampling flier.

Turian looked at this next card, double-checked that the enchantment bestowed trample and offered the hand.