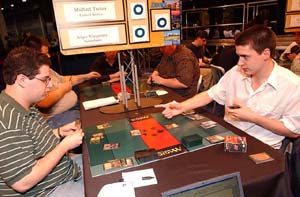 The rumors of the demise of the Extended format appear to be greatly exaggerated. With Force of Will gone and a bunch of fast combo decks still legal, many competitors proclaimed "You'd better be able to win by turn 3 or don't bother showing up." However, what's actually happened over the course of the first three rounds is that the combo decks all seem vulnerable to an avalanche of "hate." Sure they can win on the second turn, but they aren't pulling it off very often now that they're playing against live opponents, especially opponents with sideboards. Aluren gets hosed by Engineered Plague, Reanimator gets hosed by Coffin Purge and Diabolic Edict, and permission was highly underrated by many players. Force Spike and Counterspell seem both good and flexible in this environment, as do Duress and Cabal Therapy.

Two of the reactive decks that have been feasting on combo decks met in a round 4 feature match between Mike Turian and Jelger Wiegersma. Turian, along with something like 30 of his closest friends on the Team CMU mailing list, is running "The Rock." Popularized by Sol Malka back in the old Extended, The Rock lost very few cards in the rotation. Pernicious Deed and Spiritmonger are just as powerful as they ever were and Ravenous Baloth fits right in too. Cabal Therapy is an important addition to Duress, but if you've got both then the deck seems capable of beating up on combo decks. Turian brought a 3-0 record into this feature match. 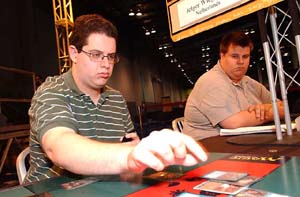 Wiegersma is running Psychatog. A full arsenal of permission spells plus Repulse and Diabolic Edict seems to slow down all the allegedly degenerate decks long enough for him to get Mr. Smiley into play and then Gush makes the 'Tog lethal a good bit faster than happens in Standard. Intuition for Accumulated Knowledge doesn't hurt either. Nor does Brainstorm plus fetch lands.

Game 1 saw Turian play out a steady stream of monsters, but Wiegersma had a counter of an Edict for every one of them. Wiegersma played all four copies of Fact or Fiction over the course of the game so he always seemed to have a full grip of cards. Turian did manage to get a Pernicious Deed onto the table and that meant Wiegersma couldn't pump the Tog up to lethal size. Wiegersma chipped away for 3 or 4 damage per turn until Turian was eventually forced to use his Deed. By then Wiegersma had a second 'Tog and I thought Turian would soon be headed to his sideboard for his anti-control cards.

But a funny thing happened on the way to game 2. Turian used Duress to take away a Mana Leak and leave Wiegersma with two Counterspells in hand. Then he fetched a Cabal Therapy with Vampiric Tutor. The first try at Therapy got Countered, but it resolved when Turian flashed it back and suddenly all the permission had been stripped out of Wiegersma's hand. Then it turned out the final card out of Turian was Living Death! Wiegersma played Read the Runes for 2 as a desperation response. He didn't come up with another counter and Living Death resolved! Wiegersma wound up with two Psychatogs, but Turian got multiple copies of Ravenous Baloth along with a Feeder, a Weaver, an Elder, and a Bird. Wiegersma had no answer and Turian grinned as only he can, having won a seemingly unwinnable game. 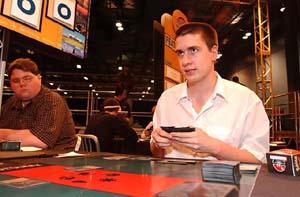 Wiegersma shook his head as he scooped up his cards and Turian blasted him with "You probably should have countered that Vampiric Tutor, huh?" Yep ... that Cabal Therapy that Turian tutored for wound up nailing both the last two counters that were keeping Wiegersma safe from something crazy, like say a Living Death. Unbelievable game.

When did Cabal Therapy turn into a good card? Turian used it to great effect once again in game 2 as he took out both a Fact or Fiction and a Forbid. Meanwhile the creature he sacrificed was a Yavimaya Elder that then gave him the land he needed to play out the rest of his spells. Spiritmonger and Treetop Village beat up on Wiegersma while Edict and Pernicious Deed prevented any 'Togs from getting in the way.

I've got to admit that when I sat down to watch this matchup I thought I was going to watch control send The Rock home crying. However, Turian made it look lopsided in the other direction. He was helped by his ability to read Wiegersma so well that he never missed with Cabal Therapy.