Round 4: Nathan Russell vs. Rod Ho 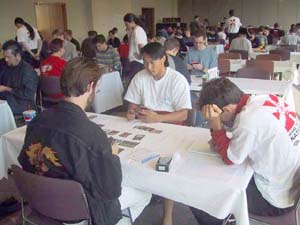 This match saw former APAC winner Nathan Russell from Adelaide playing Sydney kid and 2-time Australian Nationals champion Rod Ho.
Both confessed to having drafted aggressive decks, with Rod Ho proclaiming that his deck was awful, the worst he has ever drafted (as he always does). They are playing for the right to remain undefeated after four rounds booster draft playing.

The game starts badly for Rod Ho having to mulligan twice and finally keeping a one Mountain hand. He is, however, drawing. Nathan comes out of the blocks first turn with a Druid Lyrist and shows his second colour on the second turn by playing an Aquamoeba. Rod draws and plays a Plain, allowing him to cast his Dedicated Martyr. However, he stalls on these two land while Nathan brings out Centaur Chieftain and Leaf Dancer in quick succession and Dedicated Martyr soon takes a hit for his master's life total, but it is all for nothing as Rod draws his third land the turn before Nathan kills him.

Nathan spends a while sideboarding presumably looking for answers to the Dedicated Martyr and ends up taking out a Leafdancer for a Coral Net while Rod reveals to me his sideboard technology – Battle Strain. 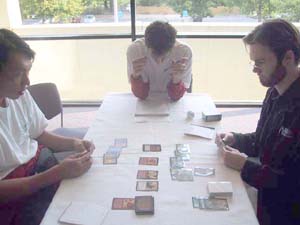 Rod chooses to play, but is forced to mulligan a hand that is too passive, containing five land and no creatures. He accepts his second hand but there are no plays until turn three, when Rod casts Ember Beast followed on turn four by its best friend Pardic Firecat, starting the race well. Meanwhile Nathan is excited by his Krosan Restorer, which allows him to untap his sole island to play Balshan Griffin. Rod refuses to take back his declaration of Werebear's superiority. Rod adds to his forces with Patchwork Gnomes, and uses them to kill the Balshan Griffin with Fiery Temper before Nathan can save it. Suddenly Nathan has only a meagre 1/ creature while Rod has seven points of damage on the table. Nathan casts Narcissism but has no more creatures to use it with and Rod Aven Cloudchasers it then quicly Reckless Charges it with flashback to attack through the air for the win.

Nathan chooses to go first but is lumbered with a slow start again. Rod gets to play his Battle Strain, forcing both myself and Nathan to read it. Nathan brings out Hydromorph Guardian then Possessed Centaur but is forced to take 5 from a Blazing Salvo to save it. Then Rod Fiery Tempers it through some Patchwork Gnomes and it becomes a race. Nathan starts to stabilise with Rabid Elephant, Wild Mongrel and Narcissism. In an attempt to squeeze through the vital damage, Rod Petravarks Nathan's untapped Forest instead of his only Island, forcing him to use his Narcissism before combat. However, Rod attacks anyway and so the final effect is that Nathan has an Island to cast his newly drawn Dematerialize. Rod tires of sending his creatures to get blocked and killed just to get through the one point of Battle Strain damage and it develops to a stall, Nathan not being able to attack for fear of burn and alpha strike and Rod just being unable to attack. However Nathan plays another Rabid Elephant and things go downhill for Rod. It finally come down to alpha strike from Nathan, which he has calculated will kill Rod in two turns unless Rod topdecks one of two Reckless Charges. He instead draws a Scorching Missile, which combined with his remaining creatures leaves Nathan on one.