Round 4: Neck and Neck

eam Austria features the 21-year old Thomas Holzinger, a player who has 97 Pro points in a relatively short career. He's appeared on the Austrian team for three years in a row, and finished in the Top 8 of Pro Tour Avacyn Restored, a finish that locked up his platinum status for the 2012-2013 season.

However, he is not the player with the most Professional Points earned on the team for Austria. That honor belongs to David Reitbauer, the second place finisher at the 2009 World Championship in Rome, with the 2013 World Magic Cup making this his fourth team appearance. Marc Mühlböck also has some Pro Tour experience, with the 17-year old Manuel Danninger being the only player on the team without any Pro Tour experience.

Their opponents are Team Ireland, with all but David Tuite having some Pro Tour experience. As relative underdogs, Marcin Sciesinski leads the pack with 14 Professional Points, followed by Stefano Rampini and Sean FitzGerald, each tied at 12 Pro Points each.

Despite their status as relative "underdogs" in this match, Ireland blasted through the Magic 2014 Team Sealed rounds unscathed, and have come well prepared for the weekend's Unified Standard rounds. Given that Ireland's best finish in the Worlds team events was 14th in Sydney 2002, when John Larkin was on the team, many in Ireland are closely following their countrymen to see if their spotless record continues to grow in wins. 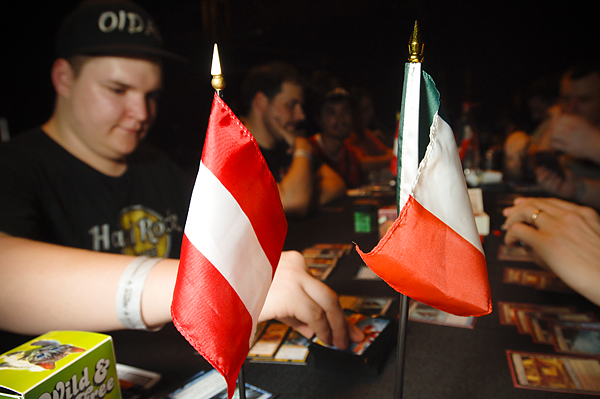 Both Austria and Ireland were 3-0 going into the Team Unified Standard rounds. Which team would emerge with a 4-0 record?

While Austria's Danninger came with a Domri Gruul deck much like the one Kibler played in the 2013 Magic World Championship, FitzGerald came with the popular Jund deck. Mühlböck sat near his teammate as Austrian coach for Unified Standard, while Sciesinski did the same for Ireland. Both were positioned farthest away from Holzinger and Rampini, both of who were settled in for an epically long game.

Danninger came out of the gates in Game 1, speeding past any opposing from FitzGerald's Jund deck.

In the second game, FitzGerald had Farseek into Thragtusk, but Danninger had Burning Earth, making FitzGerald's five nonbasic lands look rather painful. However, a second Thragtusk let him make a game of it, and the two lands that followed for Danninger were nonbasic, making his own Burning Earth a little self-searing. A key Kessig Wolf Run put Danninger against the wall, as the Austrian player got locked out from casting his Thundermaw Hellkites for the win in time due to his own enchantment.

The third game showed the resiliency the new Domri Gruul had against the likes of Lifebane Zombie, when FitzGerald cast the Magic 2014 rare and exiled nothing out of Danninger's hand, revealing lands, Burning Earth, and Zealous Conscripts. 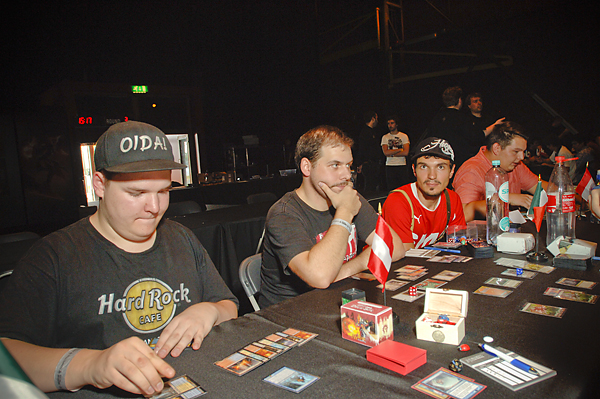 Austria's team featured a collection of Pro Tour regulars alongside rookie Manuel Danninger, who was fighting through Unified Standard with his Domri Gruul deck.

The enchantment came down on the next turn, somewhat mitigated by FitzGerald's two Swamps. Zealous Conscripts let Danninger push his opponent from 18 to 9, but Huntmaster the Fells came from the Jund player on the next turn. When Danninger's draw steps going entirely flooded in the last three turns, Austria was caught red-handed, unable to keep the Huntmaster from transforming.

That all said, the damage was done from Burning Earth. Ireland became locked out of playing its spells, and Austria's deck delivered the hasty goods that it needed to win the race.

Reitbauer led with fast start with his Black-White-Red Humans deck, leading with Champion of the Parish and following with Gather the Townsfolk. However, Tuite had a turn three Garruk, Caller of Beasts with his Elfball deck, which reloaded his hand. Reitbauer chose to push for damage when Garruk came out, ignoring the planeswalker and going for the throat. The start Reitbauer had was fast enough, and despite a turn three Garruk, Reitbauer sent Tuite to his sideboard.

In Game 2, Garruk made another turn three appearance for Tuite, but this time he was on the play, allowing him to plus the planeswalker and draw four cards, including Kalonian Hyrda and Craterhoof Behemoth. However, Reitbauer's start involved the dreaded curve of Skirsdag High Priest into Doomed Traveler and Cartel Aristocrat, which let Reitbauer make a 5/5 demon flier to dispose off Garruk.

However, the damage was done, and enough cards were drawn. Tuite played out all of his creatures before unleashing Craterhoof Behemoth, which proved to be well more than lethal in the second game. 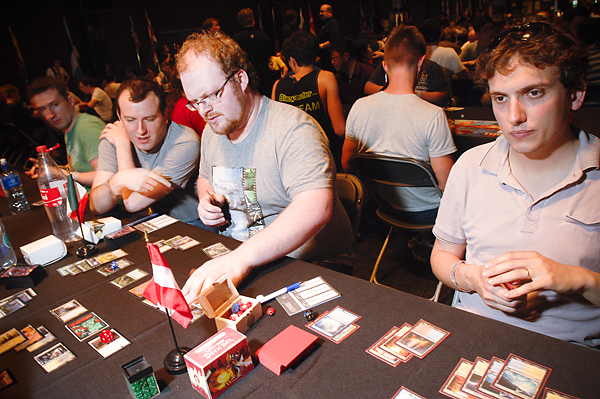 Coming off of a 3-0 finish in Team Sealed, Ireland brought with it a very interesting deck in Seat B.

The third game had Reitbauer off with a fast start involving Doomed Traveler, Gather the Townsfolk, and Xathrid Necromancer. Tuite however had a third turn Kalonian Hydra, which grew to an 8/8 when it attacked in. Orzhov Charm the turn after dropped Reitbauer to a scant 2 life, but his board was well positioned to survive combat. Attacks from his opponent over two turns knocked the board down to just two zombies on Reitbauer's side and a Voice of Resurgence on Tuite's side.

However, Reitbauer's fight for survival was all for naught, as a top-decked Kalonian Hydra sealed things for Ireland when it attacked in and doubled in size.

It all came down to the last match...

...which was still in the first game, neither player's Blue-White-Red deck winning at a brisk pace.

Game 1 was very slow game of draw-go. Both players reaching double digit land totals before any real spells were played, with the exception of some cyclers or Think Twices. Some Augur of Bolas action eventually happened, but both players started aiming Pillar of Flames at each other to prevent themselves from discarding.

Holzinger held the advantage with Moorland Haunt however, and two Sphinx's Revelation at the ready. Rampini found these as well, with neither player making much of a move. Thanks to Restoration Angel and tight play, Holzinger kept at it, getting his opponent to 7, and to the point of tapping to one open mana in order to prevent anymore damage.

Patient play from Rampini let him mitigate his life total. Supreme Verdict swept away Holzinger's key threats, and left him forced to go for Sphinx's Revelations, both of which were countered. Rampini, however, was unable to resolve the key card drawing spell the first time. The second one, however, came down uncontested, bringing him up, drawing him a new hand, but leaving his deck terribly depleted in size. Another Sphinx's Revelation brought him dangerously closer to decking out.

And Holzinger, sitting on a hand of uncounterable cards like Supreme Verdict and Counterflux, was more than content to watch it happen. However, by the time Holzinger won, there was only 14 minutes on the clock, meaning Rampini was at risk of losing the match.

Holzinger went to four cards in the second game.

Despite trying to put up a show, the four card disadvantage left him behind on mana and cards when he stumbled on lands for some key turns. Augur of Bolas and two Think Twices went a long way in giving him a chance, but the advantage was too great. However, despite being behind, he was up a game, and time was called by the time he took first damage in the game from an attacking Restoration Angel and Augur of Bolas.

A Supreme Verdict quickly squashed any clock Ireland had, so despite a follow-up Sphinx's Revelation from Rampini, it was possible that the Irish player couldn't put the game away.

The Thundermaw Hellkite that came when Holzinger tapped out for Supreme Verdict though, looked to give Rampini the clock he needed. Holzinger fell to 7.

On the next turn, Dispel and Syncopate ensured a win for Ireland, as the teams drew in time.