Round 4: Nick Eisel vs. Olivier Ruel 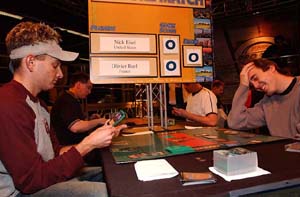 Nick Eisel is not just the #1 Limited player on Magic Online. He's also #2. When Eisel is gaming with his friends and he makes the winning play, he's catch phrase is "Soooooo, that's game boys." That's why he signed up for the nick "Thatsgameboys." He's been #1 in Magic Online for months now, and since the product launched he's also make Top 8 at two separate Limited Grand Prixs and turned himself into a popular Internet writer for Star City and the Sideboard.

Even more impressive, he thought it would be fun to make a second account on Magic Online, call it "Soooooo," and then get it to #1, just above the other half of his catch phrase on the leader board.

Now he's #1 and #2 and a lot of people thought Pro Tour Chicago might be his coming out party on the Pro Tour itself. Well, he won his first three rounds and sat down for his first Pro Tour feature match in round 4 against Olivier Ruel (who was 2-1). Eisel drafted a black-green seat from the #2 seat at the table while Ruel drafted black-white from seat 8.

Ruel took a mulligan before the first game, but his 6-card draw was excellent: morph guy, Swat, Daunting Defender, and then Gluttonous Zombie. Eisel had trouble setting up the Infest that was in his hand since he had a morph guy of his own in play and Ruel had a pair of 3/3's. Eisel also had a Festering Goblin, which could finish off one of the 3/3's, but trading 3 of his own cards for 2 of Ruel's wasn't exactly an exciting use of Infest. Eisel eventually attacked with his face-down guy, hoping Ruel would block with his (freshly cast) Gluttonous Zombie. Ruel just took the damage. Now Eisel found himself facing so much damage that he had to Infest anyway. Maybe he was planning to burn the Infest whether Ruel blocked or not, but in that case he might have been better off playing defense, especially since his face-down creature was a Spined Basher, which would have been a surprise blocker for the Gluttonous Zombie. (When I talked to Eisel after the game he explained that his plan had been to save his face-down Spined Basher with Vitality Charm, so it would survive the Infest to later trade with the Gluttonous Zombie, but he forgot to play the Charm and that messed everything up.) 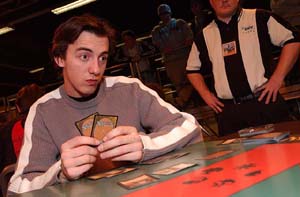 In any case Eisel looked a little rattled. Two turns later he killed Ruel's Festering Goblin with a Crown of Suspicion. Ruel had to give his own Daunting Defender –1/-1. Eisel then slapped a second Crown onto it only to realize a second later that the Defender wouldn't die. Once he realized that, he just started scooping his cards up with shaking hands, announcing "I lose."

Eisel got his nerves under control and recovered nicely in game 2. Ruel managed to turn a fairly complicated board into a stalemate where he (Ruel) had Mobilization and would be able to win in the long run because of it. I talked to several spectators afterwards who had walked away at this point, assuming Eisel had lost. Eisel spent a turn setting things up and then managed to send almost everything on the board to the graveyard using two Crowns of Suspicion, a cycled Slice and Dice, and an attack phase. When the smoke from the 5-card for 5-card trade cleared, Eisel was up the card he drew from Slice and Dice and he was up the two Insects he got when his Symbiotic Elf died. The rest of the board was Eisel's Thrashing Mudspawn and Ruel's Mobilization. One turn later Eisel used Vitality Charm so his 4/4 Mudspawn could trample over a solider token and drop Ruel to one, where every Insect was lethal. Ruel actually had the answer: an Infest and a Disciple of pro-blackness, but Eisel had an Infest of his own and calmly played it, killing the Disciple while his Mudspawn was just as lethal at 2/2. Quite a game and Eisel seemed unaware that he was in a feature match anymore. In game 3 he was just playing Magic – something he's pretty good at. 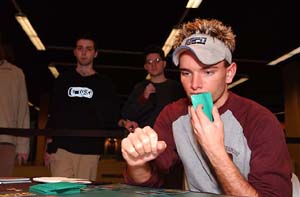 Lots of creatures died in creature combat in game 3. Ruel then Pacified Eisel's Hystrodon and had a Gluttonous Zombie and Daunting Defender of his own. Eisel had all the answers though – Snarling Undorak, Thrashing Mudspawn, and Boneknitter simply trumped Ruel's pair of 3/3's. Ruel managed to kill the Undorak by double-blocking it, but when Eisel followed up with a Centaur Glade, Ruel went ahead and scooped, extending his hand to congratulate Eisel on running the table and advancing to the rarefied air of 4-0 at the Pro Tour.