Round 4: Nicolaï Herzog vs. Helmut Summersberger 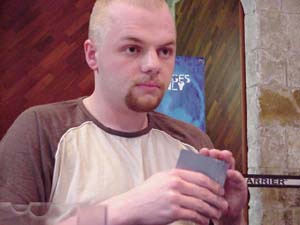 Nicolaï was pretty confident about his deck. He even showed it to Olivier Ruel who was also playing in a feature match next to him and both burst out in laughter as they realized how good Nicolai's deck was. The Norwegian's smiling face would only make anybody who would sit before him more nervous. By the time the Head Judge announced the beginning of round 4, Helmut sat down and had a nice chat with the Herzog.

Helmut Summersberger has a World's Top 8 while Nicolaï Herzog was European Champion. After shuffling their decks they started to play.

Herzog decided to go first and kept his hand, as did Helmut. On the second turn, Helmut cast a Crypt Creeper, which attacked without any resistance the next turn. Herzog kept pounding at Summersberger and a Wererat joined the Norwegian's dark forces.

The Austrian needed to retaliate and so he did with Llavan, Cephalid Empress, which immediately blocked the Wererat. Helmut himself tried to get some damage by, but his creature got repelled. Then he tried a Rabid Elephant to keep Nicolai's army at bay.

But Herzog had his own plan and got his Repel back with a little help of a Scrivener.

After some thought his opponent attacked with his Elephant, which got blocked by the Wererat that regenerated. He recast his Cephalid and played a Standstill. This got Nicolaï on the clock, since he needed something to stop his opponent's offensive but couldn't play anything without loosing a three-card advantage to Standstill.

He decided to do nothing and ended the turn.

Helmut though was not going to stand still and attacked with his Rabid Elephant, which got blocked one more time by the Rat. At the end of his turn the Norwegian repelled the Cephalid and gave his opponent three cards. He then attacked, and has his Wererat got Aether Bursted back to his hand. He recast Scrivener once more to get the Repel back to his hand. The Elephant finally got through to draw "first blood" as Nicolaï said while writing down his life totals of 17. Both were looking for a way out of the Cephalid – Repel – Scrivener loop. Herzog seemed to be the one who made it, by dropping a Faceless Butcher to remove the Cephalid from the game. Summersberger attacked with his Anurid Scavenger and his Elephant bringing Herzog down to eleven. He then cast Milkin and Arrogant Wurm to put the clock on Nicolaï, who only controlled a Faceless Butcher and a Crypt Creeper.

On the Norwegian's turn an Aven Windreader hit the table, which did not seem to suffice for the green army at the other side. Helmut used Turbulent Dreams on all opposing creatures and dealt the last blow to finish his opponent off.

Herzog is not as confident as at the beginning of the round and had to mulligan with a no-land hand. Both players drop lands until Helmut peeked at the end of his opponent's turn to reveal: Syncopate, Circular Logic, Morbid Hunger, Island, Possessed Aven and a Grotesque Hybrid. Having knowledge of such threats he decided to act and played Milkin. The Austrian used his Milkin, dropped a land and cast Anurid Scavenger.

Nicolaï sighed, thought a little bit and Possessed Aven. Helmut on the other hand filtered his library looking for a way to win. He decided to use Ebby on a Swamp and the Aven and gets three more damage through leaving his opponent at 17. The Norwegian just recast his Aven and ended his turn.

On the other side of the table a Werebear and a Cephalid Looter hit the table. Then he sent his Scavenger in to trade with the Aven. Nicolaï recast Grotesque Hybrid and hoped it would suffice. The Austrian kept going through his Library and found a Winds that sent the Hybrid back making way for the 4/4 bear. Nicolaï is at 13 life and controls a Hybrid. This was enough to make his opponent think for a while before casting a Roar of the Wurm.

Nicolaï cast Morbid Hunger on the Looter and ended his turn. Nicolaï played some creatures as did Helmut both racing against time and opponent's armies. Nicolaï seemed to have the edge by having a 3/3 flyer and later on a 2/1. While Helmut tried to find an answer for the Hybrid, Nicolaï kept attacking with his air force getting Helmut down to ten. Meanwhile a Braids, Cabal Minion got syncopated to make way for the assault of the Austrians green forces. Nicolaï retaliated with his two flyers and drops a Wererat.

With eleven minutes left on the clock Summersberger attacked with his 6/6 Wurm and his 4/4 bear having a 2/3 Wererat blocking his Wurm.

He then dropped the Empress to jolt both opposing flyers back to their owner's hand.

Suddenly the board situation changed with Herzog having to take action and so he did with a Faceless Butcher to remove the Empress from the table. Having seen his opponent recasting the 2/1 flyer he decided to stomp once again with both Wurm and bear. Nicolaï thought hard and decided to kill the Wurm with his Hybrid thereby leaving his opponent defenseless so that he conceded. 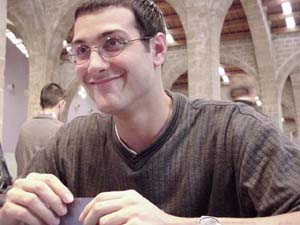 Only six minutes remained on the clock and none of the players wanted to draw. With amazing speed Herzog made a mulligan. Meantime there are only five minutes left.

Both players frenetically and dropped lands the first few turns. Then Helmut dropped a Milkin while his opponent did nothing. He then cast a looter that got Aether Bursted. Nicolaï finally dropped a creature: Wererat. An Elephant hit the table on the other side and both forces kept getting bigger.

Three minutes on the clock.

Summersberger cast an Arrogant Wurm. Nicolaï did not have enough creature power to get over the green army even though controlling a flyer so he dropped a Possessed Aven. Two minutes left.

Helmut seemed to be the calmer one at this table having very good chances of winning this game if anybody had. He went in with his Elephant and his Wurm. After Nicolaï double blocked the Wurm it got powered up by a Muscle Burst, which killed off one of his creatures leaving him at a tight spot.

Regulation time is over.

The Norwegian was at twelve and his opponent at twenty. The tempo slowed down to some very thoughtful turns.

Summersberger looked at the life totals and thought. Thought until he decided to attack with everything, leaving Nicolaï with eight life. Nicolaï was in serious trouble and one could see it in his face. He was looking at four enormous creatures cursing his opponent's good draws and cards.

Helmut did not take pity on him and cast the known Empress to make way for a total of eleven damage. But not all was lost, he could still block with his Wererat leaving him at one life

But not everything is what it looks like and he did have a Repel for the Wurm having the rat block the Looter. On his last turn he didn't draw a creature or a removal spell to force the draw and conceded with a handshake.