Round 4: Nicolas Labarre vs. Erno Ekebom 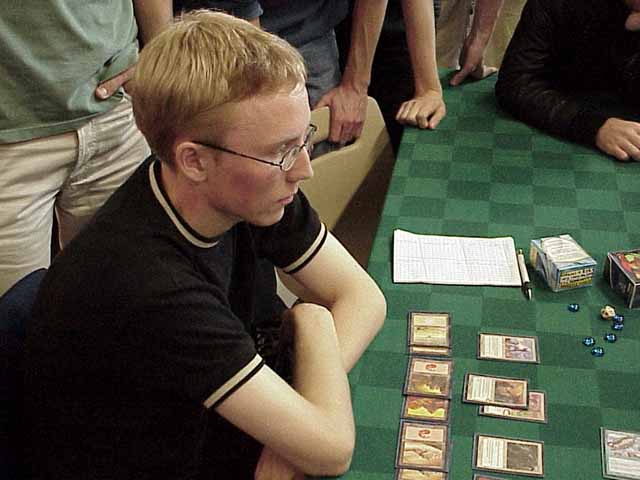 The first game began with both players getting good draws. Ekebom began with Seal of Fire, Battle Rampart, Defiant Falcon, and eventually Shock Troops. Normally that would be a monster start, but Labarre countered with Troubled Healer, Defender En-Vec and Sailmonger. An early Ribbon Snake kept pressure up for Labarre and it looked for awhile that the game would be very close. Ekebom used his mana alternately fore casting and searching. He searched for a Soul Charmer and then a Lawbringer. Ekebom continued to mount creatures and eventually found a Nightwind Glider and a Divine Griffin to help with the flying attack. Labarre tried to get rid of the Griffin which led to a fantastic sequence : Attack with Ribbon Snake, which was blocked by 3 2/2s due to Troubled Healer. Labarre did all his damage to the Griffin which was Ryhstic Shielded. At least attempted to be Shielded, as Labarre used Rethink to counter. Ekebom wasn't out of answers and fired off a Ramosian Rally. Labarre had to let the Griffin through the attack phase, then topled the Griffin. The game looked like it might swing Labarre's favor, but the lack of flying defense ultimately undid him as the Ribbon Snake couldn't help and Ekebom was doing 5 a turn. Game 1 - Ekebom 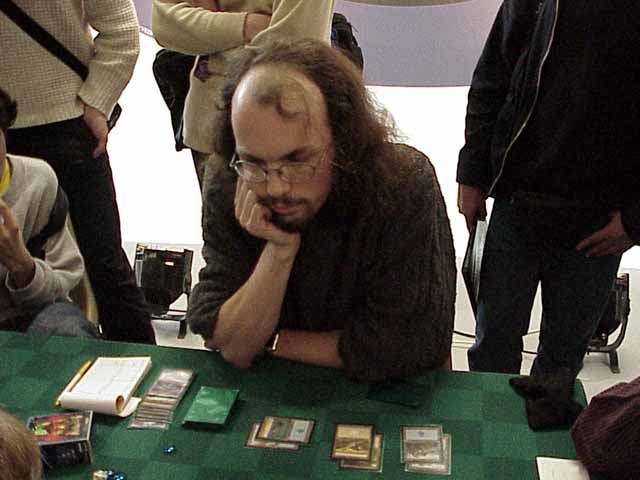 Both players again had decent draws. Ekebom started with a Defender En-Vec and an Sailmonger. He used a daze on the fourth turn to counter a Keldon Beserker but on the fifth turn Ekebom dropped Jewelled Spirit. You might think that would be game, but Labarre had resources. He dropped a Silkenfist Order and then kept attackng. A Troubled Healer kept the troops alive, and Ekebom turned out to have a creature light draw, which Labarre exploited by going first and using the Healer to keep his creatures alive. Once the Troubled Healer was gone, a Mercadian Atlas gave Labarre a big advantage by drawing twice a turn. It was only a matter of time before Labarre mustered up enough pressure to win.

I thought this one might be a pure formality when they finished shuffling with only 12 minutes remaining. Ekebom was the aggresor this time with a turn 1 Charm Peddler and a turn three Ridgeline Rager. While Labarre seemed to have no trouble drawing creatures in the first 2 games, this game he drew only a Defender En-Vec for awhile to slow things down. Eventually he drew into a Stronghold Zeppelin and a Ribbon Snake which helped matters considerably. The tide seemed to be turning in Labarre's favor when Ekebom drew strong, toppling the Zeppelin and drawing a Reveille Squad to help with the offense. Time was called and neither player was below 12, so a draw was inevitable. While Ekebom had the board advantage, Labarre had just found a Mercadian Atlas to help get things going. Would Labarre have turned things around again by trying more cards or would Ekebom have been able to sustain the pressure and win? Unfortunately we'll never know.