Round 4: No Free Wins

Shortly after Round 3 finished, I was speaking to David Ochoa, who had taken a "free win" when his opponent missed enough land drops that he more or less got to goldfish his way through the game, meeting no real resistance. For Round 4, he would have a matchup which seemed optimistic to treat as a free win. Ben Rubin, one of many Hall of Fame players in attendance, sat down to the table ready for what could be a tough control mirror match. 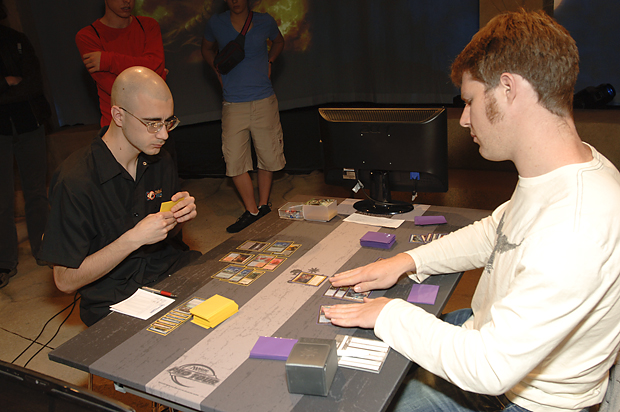 Both players led with early copies of Preordain, but while Ochoa had a quick Crumbling Necropolis to signal his colours, Rubin was able to perhaps mask his deck choice by starting on Creeping Tar Pit, and following up with a second. The Pit would be good against Jace, the Mind Sculptor, on top of its obvious help with complicated mana.

Neither Ochoa nor Rubin was quick to commit much to the board, each amassing lands and little else for the first seven turns. The life totals were 18 apiece, with only Scalding Tarn as a damage source for the match. 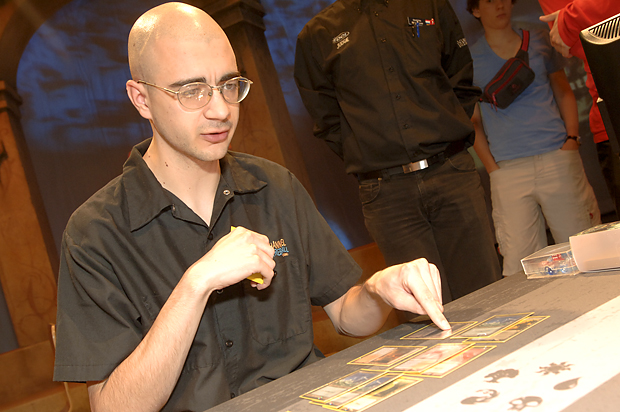 In a control mirror, having more land is one of the swing factors, and that the first missed land drop was on turn eight, from Ochoa, meant that things were pretty evenly matched. Rubin tried to get ahead with a Coalition Relic but saw a Cryptic Command from Ochoa, that drew him a card. He still had more land though, and passed with six mana available.

Ochoa tried for Jace, the Mind Sculptor, with seven cards left over in his hand, and four mana to spare. This brought the Cryptic Command from Rubin. Ochoa shot back with Mana Leak. Rubin couldn't quite afford to pay three mana, but he could afford to pay two ... for his own Mana Leak, letting him successfully draw a card and stop Ochoa's planeswalker with Cryptic Command. Ochoa cast a Preordain, and found the land that, had he naturally drawn it for his turn, would have paid for that Mana Leak.

Now that Ochoa was tapped out, Rubin went for it with Cruel Ultimatum. This drew him three cards, stripped a Lightning Bolt and a pair of copies of Mana Leak from Ochoa's as well as helping skew life totals. The game had hit a new phase, as each player started dropping haymakers. Ochoa's was Grave Titan, who brought a pair of Zombie tokens to the party. Rubin cast Preordain, looking for answers, and had one in Damnation.

Ochoa was down on cards, but worked to redress the balance with a second stab at resolving Jace, the Mind Sculptor. This time Rubin said no with a big Logic Knot. Ochoa responded to a Cruel Ultimatum from Rubin with a pair of copies of Lightning Bolt, rather than simply discarding them to the big spell that cleared out his hand. A pair of copies of Lightning Bolt were rather more effective, dropping Ochoa to 2.

The game was not over yet, though. A freshly drawn Cruel Ultimatum from Ochoa resolved, getting his life total to a healthier state, stripping three cards (Teferi, Mage of Zhalfir, Punishing Fire and Preordain) out of Rubin's hand, and pulling Grave Titan back into Ochoa's hand, all while netting him three fresh cards from the top.

Ochoa used Extirpate to snag the Punishing Fire after Rubin had drawn, successfully stopping the pesky burn spell from becoming an issue later, and seeing that Rubin's hand of four cards was a powerful Jace, the Mind Sculptor, Grave Titan, Cryptic Command and Mana Leak. Rubin cast the Titan and passed. Ochoa cast his, and it resolved.

Even after Cruel Ultimatum, Ochoa was still on just 7 life, and Rubin used Cryptic Command to tap down Ochoa's team and attacked. When Mana Leak stopped a Terminate on Grave Titan, it was on to Game 2.

Game 1 had not been fast, and with 25 minutes left on the round, both Rubin and Ochoa must have been thinking about the one draw they had each already garnered as they moved to their sideboards.

Game 2 saw a swift Relic of Progenitus from Rubin, which would provide a little insurance against Cruel Ultimatum getting full value, or simply give the opportunity to draw another card. Rubin went for the card drawing option, and followed with a Preordain. All the while, Ochoa just built up mana.

A Thoughtseize from Rubin hit Negate from Ochoa, prompting Rubin to fire off a second, which met the same response. In this second game, Ochoa was a little stuck on mana, watching on behind four lands, as Rubin got up to six. Ochoa had a Cryptic Command for Jace, the Mind Sculptor, but the extra mana from Rubin meant that he could Mana Leak back. 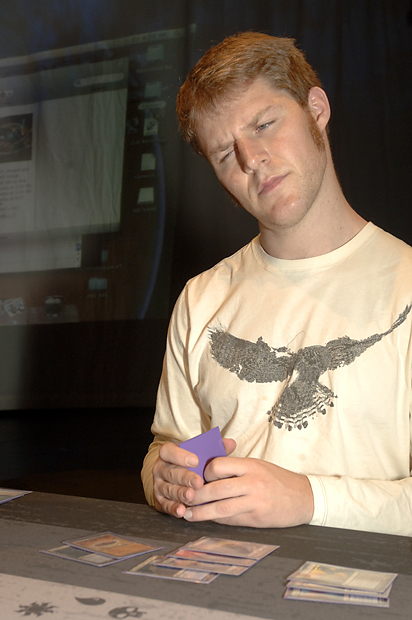 Ben Rubin is surprisingly lifelike, but the patented Data tilt of the head betrays his android heritage.

Rubin used Jace to fateseal himself, pumping the planeswalker's loyalty out of range of an attack from Creeping Tar Pit. Ochoa had the answer on his turn with a Jace of his own.

Rubin was characteristically un-flustered, casting a Grave Titan. Ochoa used Cryptic Command to bounce it, and then a Thoughtseize to strip it from Rubin's hand. The two Zombie tokens Grave Titan had produced still got stuck in, and soon Ochoa was at 14. When Ochoa tried for a Teferi, Rubin was ready with Cryptic Command. Ochoa, now on 10, cast a Coalition Relic followed by Punishing Fire to off a Zombie. A Grove of the Burnwillows allowed him to get the Punishing Fire back, and ensure the board was empty.

Rubin shrugged and cast Cruel Ultimatum. The life totals became 25 to 5, Ochoa lost his hand, and perhaps a little hope as Rubin drew up to a full hand. Between Creeping Tar Pit and Punishing Fire, Rubin was able to finish things off.