Round 4: Noah Boeken vs. Eivind Nitter 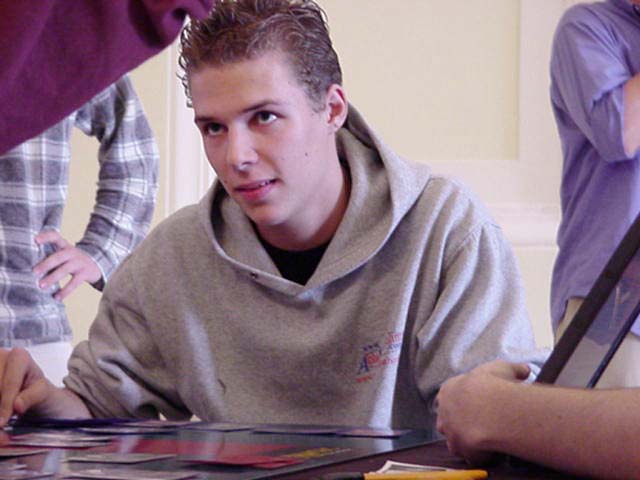 This match early in the event was the battle of the European Champions. Noah Boeken was the winner in 2000, and Eivind won the Championships this year. Boeken had been quite happy to show his two Overrun, two Shower of Coals deck to anyone who wanted a look, and so Eivind would do well to compete.

Eivind was forced to go first by Noah, and his early Werebear was Flame Bursted. Noah was surprised to see the Norwegian play Deep Reconnaissance, but it gave Nitter the second Island he needed to cast an Aven Windreader. Noah played a Springing Tiger and the pair exchanged blows. Nitter played a Nantuko Disciple, and surprisingly Boeken had nothing to do on his own turn except attack, meaning that the Disciple could easily hold off the Tiger.

The flyer attacked once again, reducing Boeken to 11. The Dutchmen had two Overruns in hand, although Eivind was on 17, and started taunting him by saying "Overrun? How many do you have?" Noah played a Krosan Avenger and then used his Overrun, but Eivind had Deluge meaning that the enhanced creatures could not attack.

One more hit from the Windreader reduced the mana-flooded Boeken to eight life, but even from this seemingly impossible position, Noah's deck was good enough to still give him a chance. He played Shower of Coals to force Eivind to use his Disciple, and this allowed him to attack for six further damage, and put Nitter on nine.

Eivind only attacked with the Windreader - he hadn't cast a creature since the fifth turn of the game. Now Noah used his second Overrun, but Eivind's creature-light hand was heavy on tricks, and he used Ghastly Demise to kill the Springing Tiger in response. As Noah killed the Disciple before Eivind could declare blockers, the Avenger got through for six damage. Nitter was now on three, but Noah had no cards left in his hand.

The Norwegian used his Windreader's ability to show that Noah was going to draw a Fledgling Imp, and thus he knew his victory was assured. He attacked with the flyer again, played a blocker for the Avenger, and Noah scooped.

Noah sideboarded for the second game, figuring that, as Eivind had plenty of ways of reacting to the Overruns, Noah would take one of them out. He brought in an Afflict and a Patriarch's Desire for an Overrun and Forest.

Going second in game two, Noah once again had to mulligan since he had no Mountains to cast his four red spells. Eivind once again had Werebear as his second turn play, although this time Noah couldn't remove it. Nitter didn't need the mana either, so the Bear dealt the first point of damage of the game.

Noah did remove it on his third turn with an Afflict, gaining card advantage. His Krosan Avenger was removed by Ghastly Demise, clearing the board going into turn four.

The Norwegian played a Springing Tiger while Noah only summoned a fairly inconsequential Dusk Imp. Eivind attacked for three and followed up with a Nantuko Disciple. Now the Dutch player had a pretty good turn, as he played Firebolt on the Disciple, Ghastly Demise on the Springing Tiger, and then a Cartographer to improve his own board.

Without a creature, Eivind had to suck up the four damage and went to fourteen, although he did find a Cursed Monstrosity as a potential blocker for the next turn. Noah of course just replayed the Fire Bolt from his graveyard, killing the Monstrosity. His next attack put Eivind on ten.

Nitter managed to play a Werebear, but since Noah had a Dusk Imp he could at least fly over. It all became a bit irrelevant as Boeken's next draw was Kamahl, Pit Fighter. Eivind scooped 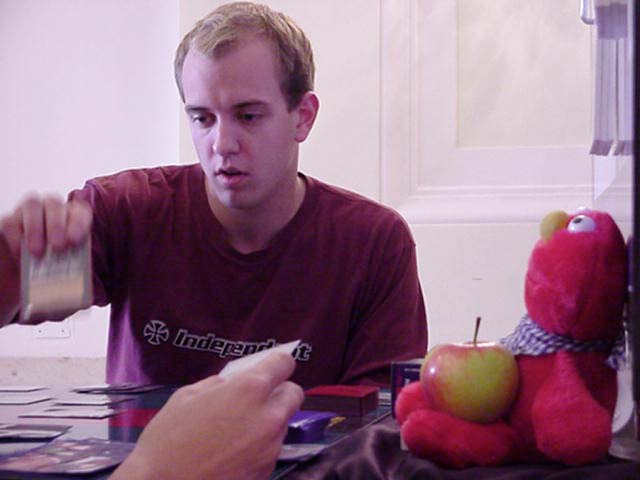 Eivind forced Noah to go first, and both players liked their hands. Boeken had a first turn play with Chatter of the Squirrel, which he played Flashback for on the second turn. Nitter didn't have anything on the first three turns, which meant Noah brought him down to twelve with the help of his third turn Krosan Avenger.

Noah added a Springing Tiger and although Eivind removed the Avenger with Patriarch's Desire, he still had to go down to seven. Nitter played Aven Windreader, which traded with the Springing Tiger, and Noah's Squirrel Tokens put the Norwegian on five.

After combat was done, Boeken played a Frightcrawler, leaving him with three creatures to Eivind's empty board. Nitter played his Cursed Monstrosity and this time he had the land card to discard to it when Noah played a Patriarch's Demise. The Demise did bring it's toughness down to one, though, and he could only trade it with a Frightcrawler, going down to three.

The Norwegian played Cephalid Looter and Boeken used Ghastly Demise on it. Nitter regenerated with Refresh, although Noah's attack put him on a solitary life-point. Eivind now found a Springing Tiger, finally shoring up the ground. Boeken played a Dusk Imp, meaning that Nitter needed an answer in his next two cards.

His draw phase gave him Morbid Hunger, putting him up to four as well as killing the Dusk Imp. Nitter was curiously reticent to attack with his 5/5 Tiger, especially after a Peek had shown him what Noah had in hand, and even more so as there was so little time left in the round. Eivind drew Cognivore and even his unwillingness to attack couldn't stop him from swinging with the 7/7 flyer.

Time was called now and Noah seemed to be in trouble. He had no way of dealing with the 7/7 flyer, and died two turns later.