Round 4: Noah Boeken vs. Mike Pustilnik 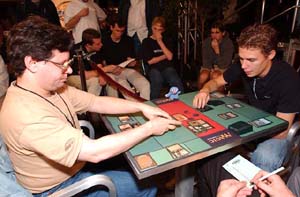 Noah chose to go first, and had to keep an opening hand without any Forests, although it did have four other lands. He didn't find one early on in the game either, meaning that his first play was an Otarian Juggernaut on turn four.

Mike had all of his colors of mana by the third turn, but he didn't manage to do anything bigger than a Farmhand until his own fourth turn when he cast Springing Tiger. Noah sacrificed Bog Wreckage to cast Cartographer, immediately returning the land to play.

Pustilnik swung across with his Springing Tiger, and played an Ember Beast. Boeken again drew a non-Forest card. He attacked with both of his creatures dropping Mike to sixteen and chose to sacrifice his Wreckage to summon a Wild Mongrel.

He used Deluge to stop the American from attacking, and then Mike played a Mongrel of his own and another Farmhand. Boeken drew and cast Shadowmage Infiltrator, but he couldn't deter Mike from attacking with his Springing Tiger and Ember Beast. Noah threw his Cartographer, Wild Mongrel, and Otarian Juggernaut. Mike sacrificed his Farmhand and played Muscle Burst, making his Tiger an 8/8. Noah then discarded a couple of cards to the Mongrel to deal eight damage. Mike thought about discarding cards to his Mongrel to give the Tiger Threshold, and did so.

This left Noah on thirteen life with just an Infiltrator facing a 5/5 Tiger, an Ember Beast, and a Wild Mongrel. He wasn't able to do anything, and conceded after one attack from Mike.

Mike boarded in his Druid Lyrist and Tattoo Ward to deal with Noah's Seton's Desire, and Noah took out his Careful Study for a Krosan Avenger.

Noah went first once again and Mike started with a first turn Druid Lyrist, and enchanted it with a Tattoo Ward on his second turn. Noah played a Twigwalker, and naturally didn't block. Pustilnik was done. 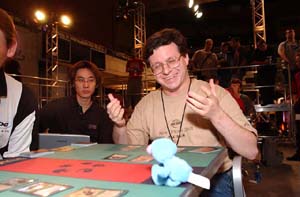 In Noah's fourth turn he attacked with the Walker, and summoned an Aven Fisher. Mike didn't mind about the card disadvantage and attacked into the Fisher, using a Muscle Burst to save his creature. Noah compounded his advantage somewhat by casting Gravedigger to fetch the Fisher.

The Gravedigger blocked Druid Lyrist, but Mike had a Shelter to save it. His Mongrel got through knocking Noah to fourteen, but Boeken managed to gain a modicum of control when he recast the Fisher, with mana open to use Twigwalker's ability.

Interestingly Mike attacked with both creatures, rather than just the Mongrel, which seemed the natural play, and obviously Noah had to think about a second Muscle Burst. In the end he just blocked the Druid Lyrist with his Aven Fisher, but the card draw just gave him another land. Mike played a Springing Tiger before passing the turn.

The Dutch player drew yet another land, and emptied his hand of spells completely when he tapped out for Krosan Avenger and Otarian Juggernaut. Mike attacked with both creatures again, and Noah had to throw both his newly summoned guys in front of he his Springing Tiger.

Mike pumped his Wild Mongrel up to give the Springing Tiger threshold, killing both blockers. Noah drew a land and had to chump the Wild Mongrel with his Twigwalker. Mike then cast an Aven Cloudchaser. Boeken then drew a spell finally - a Krosan Archer, although he was on only five life.

Mike didn't attack but played a second Wild Mongrel, and then attacked the turn after that. Noah had just drawn Aether Burst, so he blocked a Mongrel with his Archer, and when Mike pumped the unblocked Mongrel up, Noah used the Burst. Mike replayed the Mongrel. Noah was on three with a Krosan Archer facing an Aven Cloudchaser and a Wild Mongrel.

Mike attacked and Noah went to one, before drawing a Cartographer in the nick of time. Mike couldn't sensibly attack and so had to pass the turn a couple of times, while Boeken drew useful cards - Syncopate and Vivify. Mike played a Barbarian Lunatic, which Noah thought for a while about it, before not countering it.

Noah then drew and cast a Roar of the Wurm. Mike played Cartographer giving himself a one creature advantage once again. Noah now had to decide whether to attack with his Wurm, play the Flashback, and then Vivify if Mike tried to attack. This is what he did. The American blocked with his Lunatic and threw it at the Cartographer.

Mike must have thought that Noah had made a mistake when he attacked. Noah used the Vivify and Pustilnik found that instead of winning the game, he was creatureless. Mike had to concede a couple of turns later. 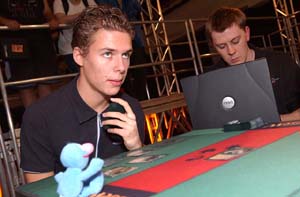 Mike went first and was off to a fast start with a second turn Wild Mongrel, and then a third turn Barbarian Lunatic. Noah played a Cartographer, and Mike didn't even try to bluff a Muscle Burst, just attacking with Wild Mongrel.

It was very bad news for Noah as Mike discarded a Roar of the Wurm to pump his Mongrel up, and then paid it's Flashback, leaving his 6/6 Wurm, Wild Mongrel, and Barbarian Lunatic being faced down by a Cartographer.

Noah did nothing so Mike attacked with his Wurm and his Wild Mongrel. Noah Vivified a land and blocked the Mongrel, which Mike made into a 4/4. Boeken was on nine, and on his turn he could only summon Wild Mongrel, which made his situation look pretty hopeless.

Pustilnik attacked with everything, and Noah blocked the 6/6 with his Cartographer, and killed off Mikey P's Mongrel with his own. This dropped him to five, and even the much-needed Aether Burst that he drew on his next turn appeared to be too late.

Mike attacked with everything again, and when Noah attempted to Aether Burst, Mike had a Shelter and that was the game.