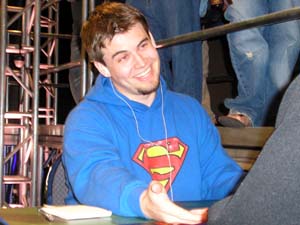 Brian Kibler, ever the gracious player.

"Is Kibler in the Hall of Fame?" asked Osyp Lebedowicz. "Just tell him right now -- we don't need to know about anyone else, but Brian looks nervous."

Two of America's top names faced off in this Feature Match of undefeated players. Kibler was running the Snake engine augmented with some Gifts Ungiven lovin' while Osyp ran the TOGIT Three-Color Control deck designed to stall the game and obliterate creatures until Yosei, Kodama of the North Tree or Meloku the Clouded Mirror come online and lay some wood.

It's interesting to see the different directions these two stars are headed right now. Kibler is facing falling off the Pro Tour for the first time in ages due to the fact that he missed Pro Tour-Columbus to a prior engagement and had to forego the trip to Nagoya because he was very sick. Lebedowicz, on the other hand, could hardly be hotter, just missing out on the Top 8 at Pro Tour-Nagoya and posting two Grand Prix Top 8s already this season, including one just two weeks ago in that monster final bracket from Detroit.

Kibler played out some mana snakes on turns two and three, but earned a laugh from Osyp when he didn't actually play any land to go along with his slithery men. Osyp added injury to his insult by playing Kodama of the North Tree, but Kibler had a North Side of his own (after sending a Sakura-Tribe Elder in search of some fertile ground) to send both spirits to the graveyard. Osyp upped the ante with Yosei, the Morning Star, while Brian answered back with Meloku the Clouded Mirror, the Moonfolk quickly dispatched by a sinister doppelganger. Umezawa's Jitte made its first appearance of the match on Kibler's side of the board, but Osyp continued to answer bomb with bomb by using Time of Need to fetch another North Side and put it directly into play, bashing Kibler down to 10 with Yosei.

The Dragonmaster stared at his hand a bit and seemed to be grimacing over a possible lack of black mana while he pondered his options. Apparently the correct play ended up being Gifts Ungiven for Shizo, Death's Storehouse, Swamp, Tendo Ice Bridge, and Kodama's Reach. Shizo and the Bridge dropped into the graveyard. Osyp attacked with only Yosei on his turn, earning a Hero's Demise for the white dragon, but this just let Osyp follow with another Yosei and then drop the hammer in the form of Hokori, Dust Drinker while Kibler's board was tapped down.

"You guys are rather quiet compared to your normal Feature Match behavior," I commented as they shuffled for the second game. This simply gave Osyp an excuse to launch into his shtick. 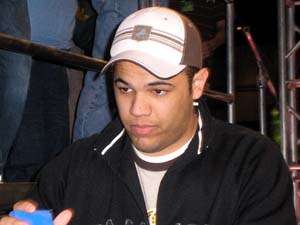 "Well there's this serious side to me that people don't understand. I'm a poet, a scholar, a philosopher, a liger..." he said, clearly trying to get a dig in at Kibler's fascination with burly felines on World of Warcraft.

"There's no "G" in there when referring to Osyp. Other than that, I think he got it right," Kibler fired back.

After waiting a beat, Osyp realized the joke.

Osyp began Game 2 with a turn-two Jitte and a turn-three Kodama's Reach, while Kibler threw down a Sakura-Tribe Elder and Sosuke's Summons on his own turns. Meloku, flying house of beats entered play for approximately one microsecond on Osyp's side of the board before "trading" with itself on Kibler's turn. Suddenly snakes started sprouting from every angle, with another Sosuke's Summons for Kibler followed by Sakura-Tribe Elder returning two Summons to Brian's hand. Yosei joined the fray for Osyp, but Seshiro made things very ugly on Kibler's next attack, dealing nine to the TOGIT leader via formerly 1/1 tokens and drawing Kibler three cards.

Osyp looked briefly like he was going to recover after he removed Seshiro with Jitte counters, but Time of Need grabbed another Seshiro for Kibler and it was on to Game 3. 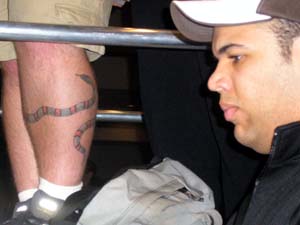 The snakes loomed everywhere around Osyp.

The third game was all about a turn-three Cranial Extraction from Kibler for Yosei, crushing two of the busty dragons out of Osyp's hand and earning a very ugly face of frustration from the New Jersey player. Ghostly Prison looked to shut down any mass attacks from Kibler, but Jitte and Meloku went to work on Osyp's life total. Gifts Ungiven made sure that even Final Judgment was only temporary, giving Kibler a trademark dragon (Keiga) and Time of Need for North Side.

The game looked locked up at that point except, well, except that Meloku can pull a player's behind out of some very ugly situations, especially when backed up by Ghostly Prison. In the end, Kibler had just enough gas to pull out the match, forcing a series of angry grumbles from the defeated Joe Black.

Somebody must have juiced the old Magic player water this weekend, because Brian Kibler and Kai Budde are now both in Day 2 and are currently undefeated. It certainly provided a vague reminder of Chicago 2000, which marked Kibler's first Pro Tour Top 8. Maybe there's still some fire left in the Dragonmaster's belly.