Round 4: Pierre Malherbaud vs. Frédéric Courtois 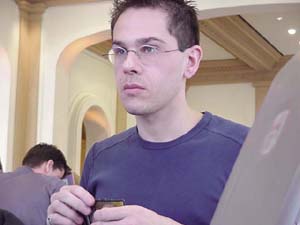 What better way to open the feature match table than with an all-French feature match. Pierre Malherbaud is the current French Champion and Frédéric is one of the best players in France.

After dicing for the seats Frédéric was the first to move with a Peek. Taking advantage of the new floor rules he noted down all the cards in Malherbaud's hand (several lands, Psychatog, Afflict and a Morgue Theft).

He soon had a Wild Mongrel racing that same Psychatog while he kept track of the cards he still knew Pierre had in hand. The Atog finally got brave and blocked the Mongrel with the help of the Afflict leading to a discard frenzy. Courtois discarded an Aven Windreader and a Call Of The Herd but when he saw Pierre was committed to saving his Atog by discarding and removing lands he bounced the troubling monster with an Aether Burst.

Again the Atog came into play and with a full hand Pierre was ready to stop the bleeding. Locked out of the ground, by the Psychatog and a Krosan Avenger, Frédéric took to the skies with an Aven Fisher before flashbacking his Call.

On his next turn he sent the Mongrel with the Fisher into the Red Zone lapsing Pierre into a nervous long period of thought. Finally he blinked and the Atog again crossed paths with the Mongrel, this time tag teaming with the Golem. A few discards later the Mongrel killed the Golem and survived the gang damage.

If Malherbaud needed an answer for the annoying Mongrel he got it in a Cephalid Retainer straight away. Frédéric sent his whole crew and despite his high life total (fourteen), Pierre used his three creatures to block. Courtois had a nasty trick up his sleeve, discarding a Sylvan Might to pump his Mongrel and then flashbacking it to pump two creatures!

After the dust settled Pierre was left with his potentially huge Psychatog while Courtois still had the Fisher and the Elephant token but a devastating Sandstone Deadfall soon put a likely end to any "amazingly huge Psychatog" win plan. Pierre tried to use a Cephalid Scout to find an answer while pumping out monsters but the damage was done: the Fisher with the help of a burn spell finished Game 1.

The first thing they did after finishing the tense first game was laugh about the Psychatog. The little golden monster seems to laugh at players from his scary card art forcing them to agonizing in countless possible pumping combinations to figure out the best possible way to block or even attack. Couple that with a Mongrel across the table and we are all reaching for the aspirins.

Frédéric pondered before keeping his hand and came out with a fourth turn Call of The Herd followed by an Aven Windreader. By then Pierre already had a Zoologist and a Rabid Elephant. Courtois sent in his Aven Windreader and the Zoologist found the perfect answer: Thought Devourer.

A Refresh saved the Windreader, with Courtois still joking about Malherbaud's luck. Despite having to discard (thus losing his SECOND Zoologist) due to his Devourer, Malherbaud still rules the table in flashy fashions. He even played his Cephalid Scout and found another creature with his Zoologist. His creatures now outnumbered Courtois' six to three.

Unaffected Courtois sent the whole team in bouncing the Devourer to save his Windreader. When the flying Beast tried to make a comeback he was ready with a Syncopate. Then his second Aether Burst bounced the Zoologist along with a Springing Tiger to send his two creatures in. 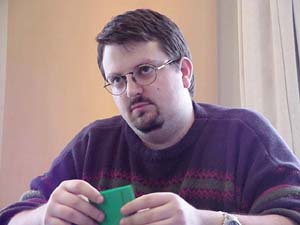 Still, the advantage on Malherbaud's side seemed immense as he replayed his creatures. What he didn't have was a lot of life to play with. The Windreader brought him down eleven and while he had Courtois at seven he was facing a Cartographer and a Lithatog as potential blockers.

A second Windreader from Courtois brought the game to its crucial point. Malherbaud had more creatures but his opponent had two huge flyers. Any mistakes would cost any of them the game. He carefully sent in only his Rabid Elephant and the Lithatog ate seven lands to survive two Afflicts and still kill it.

The Windreaders flew in dropping Pierre to five, and what seemed deep trouble, despite the heroic sacrifice of his Cephalid Scout. He later Morgue Thefted the Scout back dropping it just in time to stop the land depleted Frédéric from winning the race.

With fourteen minutes to go they traded more small talk while shuffling, discussing some of the blocks during the second game and that Devourer fetch.

Courtois came out with a Peek that led to much quick scribbling followed by Call of The Herd. With Pierre "vas-y"ing ("you go"ing) his turns, it was obvious he was in trouble. He even used an Afflict on the Elephant to draw deeper into his deck. He tried to trade the Elephant for a Krosan Avenger but Frédéric had a Refresh.

His next attempt was also thwarted when Courtois used an Aether Burst to bounce his Beast Attack token. When he tried to block with the flashback token on his next turn a Sylvan Might saved one the Elephants.

It was way too much, way too fast for Pierre's draw. He scooped on the following turn after a mere four minutes spent in this third game. Both players were very polite and friendly during the round - even when time was running out - never urging each other beyond the point of a brief reminder. It was a great round to watch with long games and fast beats.