these two shuffled up, I asked if they'd played each other before. They both nodded yes, but it was Paulo of Brazil that offered up who won it between them in Hawaii, with a smile and a wink, while Osyp shuffled on determinedly. Osyp had the advantage of going first in this battle of the 3-0 aggro decks. Both players took a mulligan, and we were off to races. Osyp played Kird Ape for his first turn, but had to run it off the decidedly non-ForestSacred Foundry, while Paulo opened with Scorched Rusalka. Osyp drew for his second turn, and incredibly had to pass the turn pack, stuck on one land and a 1/1 monkey.

Volcanic Hammer took the meek monkey down, and next turn all Osyp had was another 1/1 Kird Ape. Paulo continued developing his attack at stunted Osyp's expense, playing Soltari Priest and suspending Rift Bolt. Osyp sent the doomed (and clearly flammable) monkey in for 1 and again had to pass the turn with no play.

Paulo pointed the Rift Bolt at the Ape, drew his card, then tapped four mana, at which point Osyp just began scooping up his cards. Surprised for a moment, Paulo just stared and then began scooping up his own cards. "At least show me what it was," a frustrated Osyp said. Shown the expected Solifuge, Osyp could only shake his head at the disastrous first game. 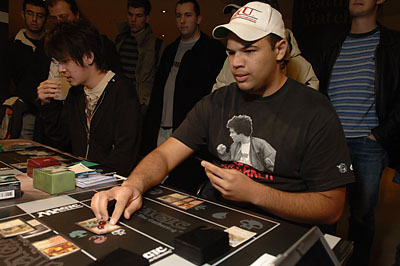 Don't meet his gaze… You may anger him.

Paulo did his best to hold off the beatings, but even with the help of Knight of the Holy Nimbus and Paladin en-Vec, his team was too small, with 2/2s and 2/1s simply outclassed by Osyp's Onslaught of 3/3s. A Lightning Helix bought an extra turn for Paulo while Soltari Priest kept charging in, getting Osyp down to 8, but at 5 life Paulo was forced to chump block with his remaining creatures to avoid dropping to burn range, and conceded a turn later. 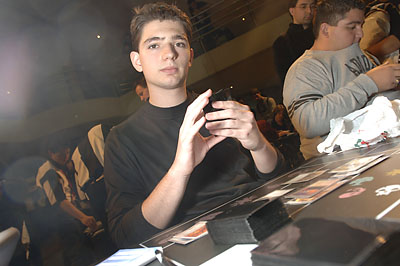 Here… Get my good side.

For this one Osyp was again the aggressor, leading with a Savannah Lion for early damage plus an Honorable Passage turn three to save it from a Volcanic Hammer. The Lion caught fire under a second hammer, but Osyp had a big follow-up with Loxodon Hierarch. With no creatures and a screwy hand of Honorable Passage and Worship, Paulo was in trouble. That is, he was in trouble right up until he drew his card for the turn and was greeted with the badly needed pro-red Soltari Priest. Slipping it into play and then taking a big hit the next turn, he untapped and dropped Worship onto the table, looking Osyp right in the eye as he did so to watch for any reaction.

If Paulo was hoping for a tell he got the biggest one of all, as Osyp immediately picked up all his cards right there.

Worse for Osyp, he then had to hear Gabe Walls regale him with the tale of how bad Paulo's opening hand had been and that the Priest had come off the top of the deck at pretty much the worst possible moment. Managing to keep it inside up until then, Osyp couldn't help but say, "That's how he beat me in Hawaii too, pretty much just like that."