Round 4: Raphaël Lévy vs. Franck Canu

Round 4: Raphaël Lévy vs. Franck Canu
by Craig Jones 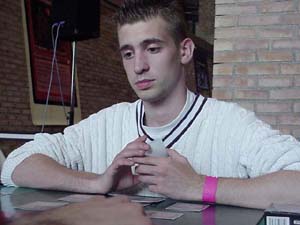 Round 4 is when the top players get to start playing and this round pitted two good Frenchmen, Franck Canu and Raphaël Lévy, against each other.

The first thing Canu did when he sat down was set the scoreboard to 2-0 in favour of Lévy as a prediction to how he thought the match would go.

"My deck's really bad," he explained.

Lévy's deck on the other hand is very powerful with two Faceless Butcher, a Cabal Patriach and multiple removal to back it up.

Lévy went first but Canu made the first play – summoning a poor man's Mongrel (Phantatog) on turn 3. He followed it up with an Auramancer but his side of the table didn't look too hot compared to Lévy's Chainflinger and Zombie Assassin.

Things stayed quiet until Lévy tried to enchant the Assassin with a Crackling Club. Canu whipped the Assassin off with a Thermal Blast before the club reached. He then continued the procession of mediocre creatures as a Mystic Familiar came to his side.

Butcher number 1 appeared to remove the Phantatog and a Gravegouger allowed Lévy to bring in some pressure. Canu found a non-land card but his Dreamwinder perished at the end of turn to a Sonic Seizure.

A Words of Wisdom found only a Ghostly Wings to put on Canu's Mystic Familiar. When he tried to block the Chainflinger with it an Afflict forced him to return the Familiar to his hand.

It put Canu close enough to gain threshold and use Shower of Coals to clear out Lévy's side of the table. Canu was on low life though and a Pardic Arsonist at threshold went straight to the dome to leave him on two life.

Canu wasn't done though as Looter and Skywing Aven came to join the returning Mystic Familiar. In a flurry he summoned Cloudchaser Aven and Aven Fisher in the same turn and it was all over as the fliers flew over to take out Lévy, who just couldn't find anything to deal that remaining two damage.

An early Peek from Canu revealed Lévy had three removal spells and no creatures. A Mystic Familiar came into play and started pecking at Lévy's life total and was followed by a Phantatog. Crippling Fatigue took down the Familiar only for it to be replaced by a Skywing Aven while Lévy still hadn't found a creature. 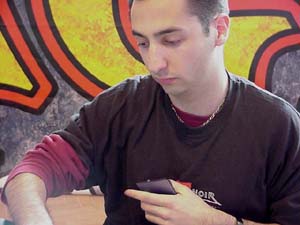 Lévy got triple black with the help of the egg and if you're looking for a first creature they don't come much better than Cabal Patriarch. Canu stole Lévy's draw step with Plagiarize only for a Butcher to appear and cleared the Phantatog out of the road for the Patriarch to attack.

Next turn a Firebolt cleared the Skywing Aven out of the way for another punishing attack. Cabal Patriarch fell to a Thermal Blast though and then a Teroh's Faithful arrived to help Canu out.

Lévy cast Arsonist and then responded with Sonic Seizure to gain threshold and deal six points to the dome. An attack sacrificed the Arsonist to force through two damage with the Butcher and a second Seizure was enough to take them to game 3.

Game 3 didn't start with too much excitement. Canu drew some cards with Peek, Words of Wisdom and Plagiarise before Lévy summoned the first creature – a Balshan Collaborator.

An Aven Flock came out on Canu's side and died to Firebolt and Afflict. Kirtar's Desire shut off the Collaborator and then Canu had a slight advantage with a Skywing Aven to Lévy's Petravark. Lévy made a Butcher, and although Canu could return the Aven to his hand Lévy could then remove the Collaborator, getting rid of the Desire and leaving a threat in waiting.

Puppeteer came out along with Hypochondria, but that wasn't enough to save it from Crippling Fatigue. An attempt to flash the Fatigue back on the returning Aven was foiled by a Liquefy.

Skywing Aven dealt with the Petravark and then time was called with Canu hanging on with six life, his Mystic Familiar and Skywing Aven facing down Lévy's Butcher and Gravedigger. With no cards in hand the Skywing Aven truly traded with a Gravedigger.

Then the Cabal Patriarch appeared. Lévy only had one turn left after this one and so used his remaining red mana to force Canu into a decision about whether he wanted to sacrifice his Hypochondria to keep his Familiar alive or use it to save himself in Lévy's turn.

Canu let the Familiar go and Lévy couldn't draw anything extra to finish Canu off in his last turn.