Round 4: Ryou Ogura vs. Masashi Oiso 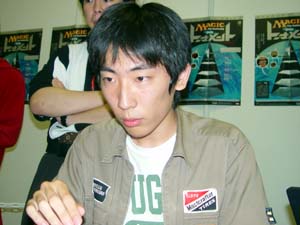 Oiso is on a tear, and is showing no signs of slowing down. He made the Top 8 in Extended and Limited Pro Tours this season, and that multi-format skill should suit him well this weekend. Thus far, he's gone a perfect 3-0 in the day's Standard rounds, and is looking to follow up strong in the Limited rounds to set up a run at the Top 8 tomorrow. His opponent this round is Ryou Ogura, who qualified for Nationals by winning the Toukai Regional tournament.

Oiso played Cranial Plate, and Ogura summoned Gold Myr. Oiso had a turn three Dross Golem, and Ogura played Suntouched Myr. Oiso's Golem got through for three, and he added Goblin War Wagon to his side. Ogura attacked with his Suntouched Myr, which traded with the Wagon. He followed up with Arcbound Bruiser, and Oiso played Goblin Replica. It died to Magma Jet, and Ogura played Neurok Prodigy. Moriok Scavenger gave Oiso his Replica back, and he put the Plate on the Scavenger. Ogura played a Skyreach Manta, and Oiso attacked with the Scavenger. It traded with the Bruiser, which gave its counters to the Myr, making it 4/4. Ogura attacked with the Manta, and played a Frogmite. Oiso put the Plate on the Replica, getting through for four damage. When Ogura attacked Oiso moved the Plate to the Golem, but Unforge made it a 2-for-1 and removed his blocker. At this point Oiso was far behind, and he conceded.

Ogura played a Thought Courier, and Oiso had Goblin Replica. The Courier started getting to work, and donned a Horned Helm. Oiso played Chittering Rats, and Ogura played Vedalken Archmage. The Rats and Replica attacked for four, and Barbed Lightning killed the Archmage before Ogura could start gaining card advantage. Ogura played Frogmite and gave it the Helm, and Oiso's Replica got through for two damage. He added Dross Golem to his side, and on the following turn it traded with the Frogmite. A Scavenger brought it back, and it went right into play for one mana. Oiso soon had a second Golem, but both died to Grab the Reigns. Oiso played an Arcbound Hybrid, and attacked with all his creatures. Despite the Courier, Ogura had nothing left to put up a fight, and conceded. 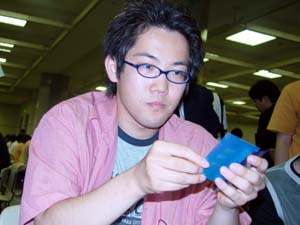 Ogura had Thought Courier on turn three, and Oiso played Chittering Rats. The Courier was activated, Ogura untapped, and played Vedalken Archmage. Oiso got rid of the Courier with Lose Hope, and the Archmage with Barbed Lighting. Ogura's Frogmite traded with the Rats, and Oiso played Goblin War Wagon. Ogura played another Courier, while Oiso attacked with the Wagon and played Cackling Imp. Ogura activated the Courier and ended his turn, taking five damage on Oiso's attack. Oiso played Blasting Station, and Ogura cast Grab the Reigns on Oiso's next attack. In response, Oiso activated Blasting Station to save his Imp. He then played Goblin Replica, and ended his turn. Magma Jet killed the Imp, but Oiso kept coming, bringing the Wagon back with a Scavenger. Ogura had no answers left, and the game and match were over.