Round 4: Sam Lau vs. Louis Boileau 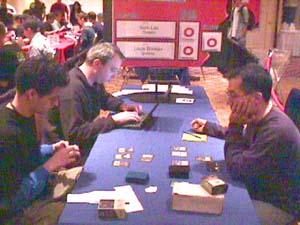 "Since Krakower isn't here, I'm the old guy," said Sam Lau. This match is the young vs. the not-so-young; Louis Boileau is all of 19, whereas Lau is a more-worldly 33. Boileau has the more impressive overall resume, including multiple top 8's at Grand Prix and a top 8 at Nationals last year. But Lau has accomplished what Boileau is trying to do today – secure a seat on the Canadian National team.

Both players are a saucy 4-0 and looking to land seats at the top table for tomorrow's draft action. Lau is playing Psychatog, and Boileau is with red/green beats. That is the match-up of the tournament.

Lau went first and summoned a Nightscape Familiar. Boileau retaliated with a Wild Mongrel. Lau had a tell-tale third turn when he Repulsed the Mongrel main-phase, attacked, and failed to lay a third land. Boileau simply recast his Mongrel and played a third land.

Lau found a third land and sat back, Memory Lapsing Boileau's Yavimaya Barbarian and then Recoiling the Mongrel. Lau then drew a fourth land (how lucky!), attacked, and tapped out to Probe with kicker. He discarded a land and Circular Logic, and Boileau simply discarded two land.

Boileau took advantage of Lau tapping out, dropping a Flametongue Kavu on the Familiar. When he attacked, Lau Repulsed it. Boileau recast his Mongrel and the Barbarian, and Lau simply shrugged.

Lau Probed with kicker again on his next turn, and Boileau let it resolve without pitching his two cards to the Mongrel. Were this Game 2, Lau could have made him pay by laying a black land and Ghastly Demising it after Probe resolved, but Boileau's mistake made no difference. 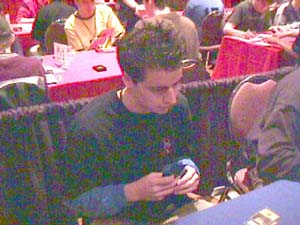 Boileau attacked for four and played another land, lamenting that 10 of his first 13 cards were land. But one of them was a Keldon Necropolis, which may come into play, considering Lau was down to 8.

Lau Fact or Fictioned at the end of Boileau's turn, and took a Psychatog vs. four other cards, since he needed defense. That played directly in Lau's plan... he tapped seven mana, cast Upheaval, played another land, and dropped the 'Tog. Boileau drew a card and scooped.

Louis kept a hand with only a Karplusan Forest and a Keldon Necropolis for land, and had to attempt a turn-2 Mongrel even though Lau was representing Force Spike. It resolved. Boileau tried a Firebolt at Lau's head, but Lau correctly guessed that he was short on land and Memory Lapsed it. Boileau cursed and passed the turn without playing a third land.

The trouble was that Lau was also stuck on two. He debated for a while before playing a Familiar, which would force Boileau to Firebolt it. Louis obliged and attacked again. 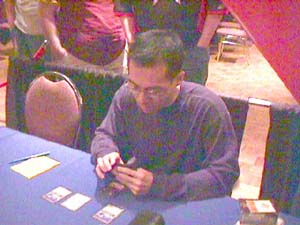 Lau found his third land first and played a 'Tog. Boileau inhaled, knocked on his deck, and drew a Karplusan Forest. He played it and attacked with the Mongrel. When Lau didn't block, Boileau madnessed a Violent Eruption at him, taking him to 7. Both players did nothing for a turn, then Lau cast Repulse on the Mongrel. Lau responded with another madnessed Eruption, taking him to 3.

Lau swung in with the 'Tog, and was very close to killing Boileau thanks to the amount of he'd been taking from the Karplusans. Boileau had one more turn.

Boileau drew what he needed, a Mossfire Valley. He cast him Mongrel, but Lau had a Counterspell. Louis had a red floating from the Valley and started calculating. He knew he had to do it, and cast a Firebolt at Lau. Lau took it, down to 1. Boileau had a Firebolt left in the grip and a Karplusan on the table. He had to go for it... but Lau had the Force Spike. And that's the game.

Yes, it is a small sample size, but in the four matches I've covered the tally is Psychatog 4, red/green 0. Anti-tog my foot.

3 Call of the Herd 4 Firebolt