Round 4: Scott Johns vs. Zvi Mowshowitz 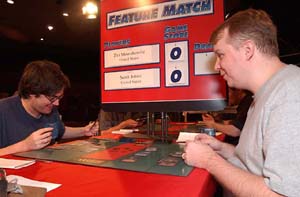 The two planeswalkers stood across from each other, a chill wind blowing against their weathered skin. Mage Scott thought back to his harsh training in the Salt Marshes of his native lands. He and his opponent had both been raised to harness the powers of the Islands and the Swamps, but now found themselves pitted against one another.

Zvi gritted his teeth in determination. "I abandoned the ways of corruption long ago", he mused internally, "and now it is fate that compels me to do battle against my old comrade." The younger planeswalker watched in awe as the elder Johns conjured a humongous zombie straight from the ground. It stood several feet high, and appeared to be composed of muck, mire, and bones interred from the very earth below.

"That appears to be a Rotting Giant, it cannot yet harm me", speculated Mowshowitz, as he conjured a fiery Ember Beast from the very heat of the air itself. It crackled and hissed with pure energy, waiting for another physical body to anchor to before it could wreck havoc.

"Zvi, prepare for your Last Rites!", screamed Scott, assaulting the very mind of his enemy. Zvi clutched his head in agony, his concentration completely shattered. He clutched at memories of Firebolts and Engulfing Flames, but could no longer think clearly enough to wield spell of Shelter.

Dead corpses littered the ground around Scott, and his giant absorbed the flesh of a Dusk Imp, giving it the strength to lunge at Zvi, wounding the mage.

On the horizon a sole figure ran to Zvi's side. It was a Otarian Nomad Decoy, renowned for their abilities to distract enemies from their murderous charge. He arrived to late to stop the second charge of the Giant, which had absorbed a portion of a Psychatog raised from the graveyard-like areas around. 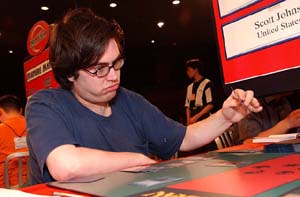 "Your ally might be able to save you ordinarily, but fear the power of mine!" And with that, Scott motioned to the ground, where a small welling of water appeared. It widened and cracked in instants, and a Cephalid sprung forth from the depths. It was no ordinary Cephalid though-it was a Retainer, capable of stopping entire armies of beasts and soldiers alike through his powers of paralyzation.

Indeed, the Retainer kept the Beast and the Decoy at bay, while the Giant continued his assault, incorporating all matter of scraps and muck from the ground to keep his stature. He was joined by an Aven Smokeweaver from the skies, and when Johns Repeled the Decoy from whence he came, Zvi was forced to beat a hasty retreat back to lick his wounds.

Years later, Zvi was a diminished mage, when Scott came to finish the job he had started some time ago. He read the mind of his adversary, and discovered to his horror images of burning fire and Engulfing Flames. Zvi released his Patrol Hounds from the perimeter of his house, and it was joined by one of the finest Aven Cloudchasers from the heavens above.

Scott attempted to summon his Rotting Giant pet yet again, but it was unable to stand firmly on the Plains of Zvi's homestead. The Hound tore the Giant to pieces, while being Sheltered by Zvi's protective aura-and a simple Flame from the diminutive mage's hand reduced the zombie to a pile of ash.

Similarly, a Dusk Imp soon found itself incinerated by a Firebolt from the sun above, while the Hound and Chaser continued to assault Johns. An Aven Flock came to join the fray, and soon Johns found himself fleeing from the creatures and fire spells that attacked him from all sides.

"Zvi", Scott implored, "we were once friends, why must you hunt me down?"

"Scott," Zvi replied, "you tried to kill me, you killed my allies, and you have stayed in the darkness of the world. You must be destroyed for the safety of this world!"

With that, both mages prepared to battle to the death. Zvi unleashed a pair of Hounds to attack Scott, who could do naught to defend himself. It was as if all his dark energies had abandoned him. 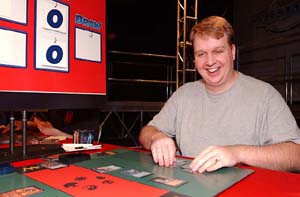 Suddenly, his last great hope appeared; the Cephalid Retainer who had aided him in defeating Zvi years earlier. Mowshowitz was prepared this time, as he emitted a Firebolt from each hand, disintegrating the aquatic man where he stood. Without any protection left, Scott fell to the ground, defeated at last by his nemesis.

Zvi pondered this for a moment. "Very well, I shall let you live. But you must turn from the paths of the dark Swamps and embrace the light as I have."

With that, Zvi extended his hand to his fallen friend. He lifted Scott up, and the two walked away together, towards an uncertain yet promising future.