Round 4: Shuuhei Nakamura vs. Masashi Ooiso

Masashi Ooiso is definitely the hottest player in Japan right now, and may very well be the hottest player in the world. Thanks to Pro Tour and Grand Prix success highlighted by a finals appearance at Pro Tour Yokohama about a month ago, Oosio is practically a lock for the Rookie of the Year race unless he does very poorly at Worlds and Craig Krempals has a spectacular performance. His opponent may not be as well known, but has his own list of impressive accomplishments. Shuuhei Nakamura came in second at GP Kobe, second at Grand Prix Nagoya, and made the Top 8 of Japan’s end of year tournament last year. 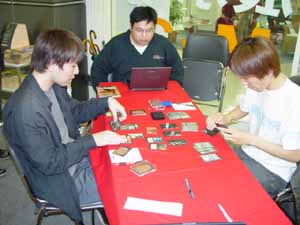 Nakamura summoned Shepard of Rot, and Ooiso had Severed Legion. Nakamura’s Frightshroud Courier blocked and traded with the Legion, and Ooiso played a morph creature. Ooiso played Ghosthelm Courier and ended his turn. Nakamura flipped over his morph to reveal Sootfeather Flock, and attacked for three. Ooiso’s Courier blocked and traded with the Shepard, and he played two more morph creatures. Nakamura summoned Putrid Raptor, which was bounced right away thanks to Echo Tracer, allowing Ooiso to get through a significant sized attack. A few trades later, things seemed to he going well for Nakamura when he played a board dominating Frenetic Raptor, but Ooiso used Reaping the Graves to stay in the game. The Raptor attacked for six damage, and Deaths-Head Buzzard joined. Nakamura attacked with his flier on the following turn and Ooiso morphed up Mistform Seaswift, but Spark Spray killed it before blockers could be declared.

Ooiso was far from finished. He morphed up Skinthinner to kill the Raptor, and summoned Shoreline Ranger to stabilize the board. Nakamura unmorphed Infernal Caretaker to give himself more to work with, and after some thought, he enchanted the Buzzard with Crown of Fury and attacked. Ooiso blocked, and after the Buzzard died it killed the Ranger and Skinthinner, as well as Nakamura’s Goblin Turncoat. Nakamura rebuilt with the Shepard and Courier, followed by a morph. Ooiso had a morph and Covert Operative- the morph traded with the Caretaker, and turned out to be Echo Tracer. It wasn’t activated so that Ooiso could cast Reaping the Graves instead. Covert Operative died to Nakamura’s Skinthinner, but Ooiso came right back with two morph creatures. It didn’t matter, as Nakamura finished things up with Shepard of Rot.

Ooiso mulliganed his opening hand. Nakamura’s second turn Shepard was tapped down by a cycled Choking Tethers on end step, as Ooiso was obviously looking for more land. He found it, and played Nantuko Husk. Nakamura’s Embalmed Brawler came out as a 4/4, revealing a Husk of his own and Skinthinner. Ooiso played a morph and Imagecrafter, then ended his turn. Nakamura played a morph and said go, while Ooiso summoned Covert Operative. Nakamura played another morph, and Ooiso flipped over his to reveal a Seaswift, which attacked along with the Operative for six evasion damage. Mistfotm Wall held down the fort, while Nakamura was struggling to find his fifth land so he could unmorph Skinthinner. He finally did and killed the Operative, and to Ooiso’s dismay, a second morph flipped over to reveal yet another Skinthinner, killing the Seaswift. Ooiso still had the ground well taken care of thanks to Mistform Wall and Crypt Sliver, so Nakamura unmorphed Sootfeather Flock and flew over for three damage. Ooiso attacked with his Husk and Skinthinner went in front of it, so Imagecrafter made the Husk into a Sliver and it regenerated.

On the next turn, the Husk attempted to plow through another creature and regenerate, but this time it was Putrid Raptor, and survived the attack. Ooiso flipped over Echo Tracer soon after to send back the 4/4, and attacked with his Tracer and Husk. Thanks to Ghosthelm Courier the Tracer was more intimidating, and Skinthinner along with a morph (Skirk Commando) had to be thrown in the way to kill it. Essence Fracture slowed down the Flock for a bit, as Ooiso was still lacking an answer and time was running out. Spark Spray killed Ooiso’s Imagecrafter, which took care of the regenerating Husk problem. Reaping the Graves gave Ooiso the answer he was looking for, as he brought back Mistform Seaswift and Echo Tracer. He played them both on the same turn, but tapped seven mana by accident. This was really bad, because it left him with only one untapped, and he wouldn’t be able to unmorph his Seaswift and block the Flock.

Ooiso took three more damage from the flier, untapped, flipped over the Seaswift, and attacked for three damage. Nakamura unmorphed Infernal Caretaker, bringing back six zombies including two Skinthinners. Regardless, Ooiso had the win. Echo Tracer flipped over on end step to bounce back the Flock, and he was able to attack for enough to force a third game.

Nakamura summoned Goblin Sledder and put Crown of Fury on it, getting some laughs out of the spectators. To make matters worse, Ooiso played Mistform Wall, which could easily contain the 2/1 first striker. Lingering Death handled that problem, and Ooiso summoned a morph and Imagecrafter. The Sledder attacked and was blocked by a morph, which flipped over to reveal Zombie Cutthroat. Nakamura had a 4/4 Embalmed Brawler along with a morph, while Ooiso played Covert Operative. Nakamura brought out his own evasion army made up of Deaths-Head Buzzard and Sootfeather Flock. This team, combined with two Husks on the ground, was enough to give Nakamura the win.