Round 4: Smiles and Frowns

It was a battle of the old and new faces of American Magic, as reigning U.S. Champ Luis Scott-Vargas faced off against David Williams, poker celebrity and gamer for life. Both were off to a great 3-0 start, Williams with the breakout Storm deck and LSV with Big Red-Green.

LSV won the die roll and kept his opener. Williams went down to six.

"Always good to start out with a mulligan," said Williams as he shuffled up.

"If I mulligan again, you're out of here. It's bad enough I have the black cat [Magic Online honcho Worth Wollpert] standing over my shoulder watching me draw it." He grinned. 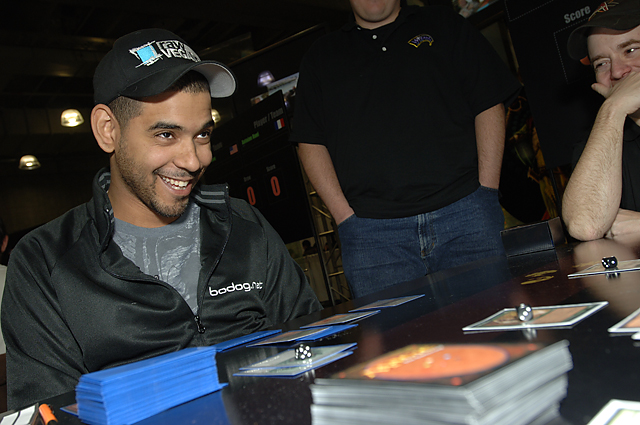 His six were acceptable, and they were off. Williams led with a pair of Lotus Blooms and Spinerock Knoll. He waited and charged his lands while LSV got Highland Weald with Into the North, then Garruk Wildspeaker and a Wall of Roots. Williams Shocked the planeswalker down to 2 loyalty, slowing down any potential Overruns. Not that it mattered, since LSV was missing attackers.

He tried to assemble a team, but with no disruption he was just waiting for Williams to blow him up. The two Blooms came off suspend.

Luis Scott Vargas: "Am I dead?"

Dave Williams: "I think so."

He drew his card.

He played out Pyromancer's Swath, Shock, and Grapeshot, then showed the Dragonstorm that was hiding, appropriately enough, under the Knoll.

LSV gamely sideboarded, but knew that the skewed matchup wasn't going to improve. 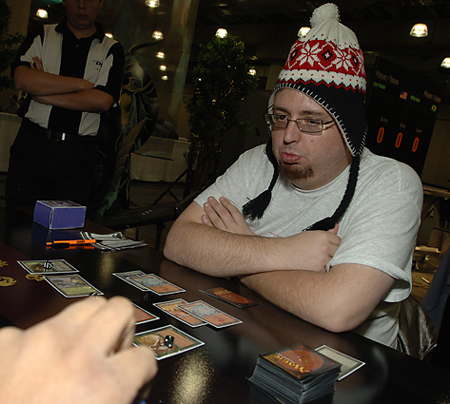 This time, Williams had two hideaways ready to dig up some dynamite. Scott-Vargas played out Wall of Roots and a very sad 0/1 Tarmogoyf. LSV himself was also sad-faced, despite his whimsical hat. He made plays on the hope that somehow Williams hadn't assembled a kill, but of course he had. Seven damage freed Dragonstorm for the win.