Round 4: Sol Malka vs. William Jensen 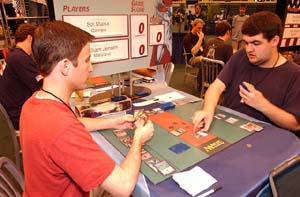 It's been a long, successful trip for William "Baby Huey" Jensen since his 1998 Top 16 finish at the Junior Super Series, including a Pro Tour Top 8 and a Masters Championship. His Top 8 at last year's Nationals has people thinking this might be his year to make the team. He's certainly an imposing figure, thanks equally to his large physical size and a completely dispassionate attitude to the game at hand.

That's a trait he shares with his opponent this round, Sol Malka. Called "The People's Champion" by some, Malka prefers to let his actions speak of his ability, and he recently did just that at Grand Prix - Tampa, walking away with the title. Today he is with a signature deck "The Million Dollar Man", a black-blue-green goodstuff deck. Jensen is with Psychatog, the most popular deck in the tournament. 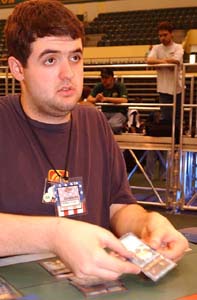 Jensen's secrets were revealed early on by Duress, stealing Duress and seeing a pair of Circular Logics, Gainsay, and Duress, which Malka took. It didn't much matter, as Jensen found another two turns later, and used it to take Fact or Fiction. Shadowmage Infiltrator from Malka drew out the Gainsay, and then the two settled in for some serious Draw-Go.

Jensen never missed a land drop, bringing Possessed Aven into play on turn nine. He Gainsaid a Fact or Fiction from Malka, but let Pernicious Deed by. It axed the Aven on Jensen's upkeep. Jensen passed it back and Malka decided to strike. He played Call of the Herd. Jensen let it go. He tried a Finkel. Jensen, completely blasé, turned the tables by Recoiling the Call token and stopping the Finkel with Circular Logic.

Jensen seemed light on action, but he conveniently had seven cards in his graveyard. Cephalid Coliseum gassed up his hand and put Deep Analysis in the graveyard. Jensen was up to five cards and Malka was running out of options. He untapped, flashed back the Call, and tried a third Finkel. Jensen responded with Fact or Fiction, turning over a pair of Psychatogs, a Counterspell, a Recoil and an Island. Jensen got counter and Psychatog, and had the game in hand.

Tapping nine, he put down Upheaval. The remaining three let Psychatog rule the empty board. Malka's rejoinder was a lone Llanowar Elf. Jensen swung in, and rather than draw things out by chump blocking, Malka hoped for a screw-up and let the 'Tog through. It dealt twenty. 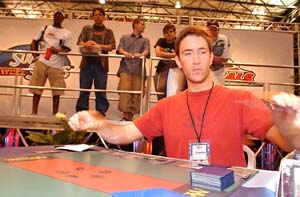 Malka swung with both his creatures, trading his Infiltrator for four cards in Jensen's graveyard and three more damage. Jensen was far from worried. He matched the flashed back Call with another Psychatog. Still, he had just two cards left in hand. Malka's Disrupting Scepter seemed a coup, particularly when it stripped Upheaval.

Jensen just shrugged, untapped, and played a second Upheaval. He only had enough mana to drop Familiar. He followed up with Psychatog, and Chainer's Edict took out the Familiar. Another 'Tog hit the table. Malka tried Jonny Magic. Jensen's Psychatogs went unblocked, and he Recoiled the Infiltrator. Malka replayed it, but now he was in dire straits. He taxed Jensen's graveyard by chump blocking, but it wasn't to be. Two turns later it was all over.