Round 4: Steven Cassell vs. Elijah Pollock 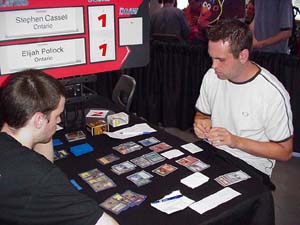 Both Steve Cassell and Elijah Pollock make winning look easy. They breezed through the first three rounds of Standard with perfect records (though Pollock is quick to call his deck "terrible"), and are a little uneasy about switching to limited while on a roll. Cassell hit the public eye with his performance at Grand Prix - Milwaukee, where he fell in the quarters to eventual champion Eric "Danger" Taylor. Pollock has been drowning in success since teaming up with Steven Wolfman and David Rood to form 2020. Their finals appearances at Boston and the Venice Masters have earned him a lot of money.

Cassell had to mulligan his first draw, but kept his second. He led with Carrion Feeder, but had no second land. Pollock played out three and a morph before Cassell found a second land. Pollock's morph was Skirk Marauder, and took out the Feeder on the following turn. Pollock dropped Extra Arms on his Marauder and brought Cassell to fourteen, hoping to make a quick end. Cassell drew a second swamp and played a perfect rejoinder: Death's Head Buzzard.

Pollock didn't have a lot of action, and the reprieve of the Buzzard gave Cassell time to pull up a Wirewood Guardian and Forestcycle it. His next turn he brought out a mammoth Elvish Soultiller and swung in with his Buzzard. That was exactly what Pollock wanted to see. He dropped Frozen Solid on the Soultiller and smashed it with his Extra Arms, dealing two. Another Frozen Solid negated the Buzzard.

Cassell held the ground with Needleshot Gourna. Pollock used Riptide Survivor to turn two mountains into three cards, revealing his total manaflood. Cassell added a Toxin Sliver and a morph to the board and passed it back. Pollock made a Dragon Mage, but the Toxin Sliver was making trouble. Cassell tried another morph. 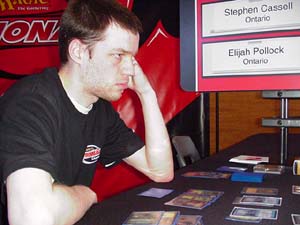 "You haven't laid a land yet?" – Elijah Pollock

Pollock showed him Dispersal Shield to get rid of what turned out to be Towering Baloth. Cassell played his fifth land and Noxious Ghoul, while flipping up his Zombie Cutthroat, leaving just the Mage on Pollock's side of the board. Pollock's next draw was a blank, and he conceded, picking up his deck.

Both players hit three lands with no difficulty in the second game, but Cassell held up on his, choosing to cycle Krosan Tusker in response to Pollock's morph instead. Pollock hit for two and made no play. He had the Dispersal Shield for Cassell's morphed Zombie Cutthroat. Pollock dropped Covert Operative and passed it back.

Cassell needed to mount an offense to outrace the Operative. He tried Spitting Gourna, but Pollock was ready with Frozen Solid and flipped up his Skirk Marauder to get it out of the way. Cassell answered with Noxious Ghoul. Pollock hit again and then drew five cards off Rush of Knowledge. Cassell tried to stay in the game with Toxin Sliver and morph, but couldn't block the Operative, and was finished by Torrent of Fire.

Cassell's draw for the final game was slow. Pollock was first on the board with a morph, and Cassell answered with Undead Warchief. Pollock swung in, and after he went unblocked, had to spend his mana to flip up his Marauder to get rid of the potential problem. Cassell's Noxious Ghoul briefly took over the board, only to be ousted by Crested Craghorn. 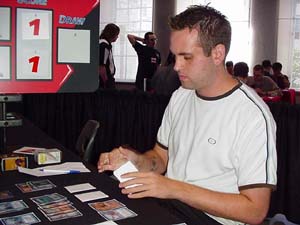 Needleshot Gourna arrived on the scene and wasn't going anywhere. Pollock brought out a Mercurial Kite. Cassell hit for three and made Stonewood Invoker and morph with seven lands in play. Pollock thought at end of turn and then Shocked the morph, which turned out to be Towering Baloth.

Pollock tapped out to summon a Dragon Mage. Cassell simply played his eighth land and hit with the Invoker, pumping it up after it went unblocked. Pollock had Frozen Solid in hand to answer the problem on his next turn. He played a morph and gave it back to Cassell. He was out of gas.

Pollock showed him the directions to the gas station with a monster Rush of Knowledge that served up seven cards. Skirk Volcanist and Frozen Solid helped clear the way for his troops, and up so many cards, it wasn't hard for him to win.