Round 4: Stop All the Clocks

uentin Martin loves Planar Chaos more than most. He has a natural penchant for having a hand full of cards and attacking for lots. The alternate reality with green as the colour of card drawing has caused the whole colour's value to skyrocket in draft, and Quentin has been taking advantage of it, with a blue-green deck that will happily refill its hand when it runs out of monsters, while actually killing things thanks to the two hallmark blue commons, Shaper Parasite and Erratic Mutation.

Quentin won the roll and led with an Island. It was Scott-Vargas who had the first play of the game, though, with a Gemhide Sliver on turn two. Quentin replied with Spiketail Drakeling, while Luis was building up with a suspended Nantuko Shaman.

Luis Scott-Vargas and Quentin Martin snarl at each other across the red zone.

In the face of an ever-filling board of green monsters from the US National team member, Quentin gummed up the ground with a Penumbra Spider. He also made a morph to Luis's Hedge Troll. Slowly but surely Quentin tried to work out the contents of his opponent's deck, based on what he had passed, and as a consequence, the deck of the player that had sat between them.

A Temporal Isolation on Penumbra Spider put Quentin well on the back foot, and he was forced to unflip his Slipstream Serpent effectively as a defender to hold the board, while Luis filled up with a Scarwood Treefolk.

Pouncing Wurm jumped out for Martin, who was racing in the air in spite of ground chicanery from his opponent. Thanks to Citanul Woodreaders the turn before, it seemed likely that Scott-Vargas was going to run out of gas first in this race.

It turned out that post combat, Luis had Fiery Justice, which gave Quentin some life but took away his 6/6. Quentin, meanwhile, was all take and no give, as his Wurm ran in, with Erratic Mutation making his opponent's double block suddenly rather weak. He followed up with a Fathom Seer that immediately flipped. Quentin's deck seemed to be a veritable card-drawing machine.

Scott-Vargas made a Pallid Mycoderm but was suddenly well behind on the board. Quentin had Errant Ephemeron to Luis's Venser's Sliver. It was not going to be pretty.

A second Fathom Seer unmorphed. It seemed virtually impossible that Quentin was going to run out of answers with such a collection. He had a Piracy Charm to kill Gemhide Sliver (making Venser's Sliver into an expensive Sliver moocher with nobody to mooch off), and swung again.

Luis untapped, drew, and scooped them up, looking to his sideboard for some sort of an answer.

Luis began with a Spinneret Sliver, following up with a Hedge Troll (without a Plains), to Quentin's turn-two suspended Errant Ephemeron, turn-three morph. Again it was Scott-Vargas dictating the pace of the early game, with Quentin leaving things a touch longer but ultimately looking to get card advantage back sufficient to win the game. A face-up Fathom Seer was Quentin's plan after a Watcher Sliver came down on the other side of the board. What he needed was a good blocker right that second, rather than cards (including his islands) in his hand.

When Scott-Vargas swung in, Quentin blocked each Sliver, one with Fathom Seer and one with a morph, which survived thanks to Aether Web. Luis suspended a Duskrider Peregrine and passed. 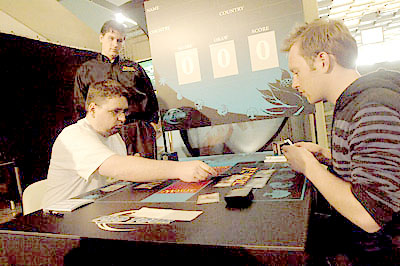 Right in the kisser.

There was one turn left before the Ephemeron hit play, and all Quentin had was a face-up Fledgling Mawcor. This game didn't seem as big as the Gaea's Anthem-powered swing from his opponent. After a little thought, Quentin blocked only the Hedge Troll, using Fathom Seer. Strength in Numbers was enough to cause the Englishman to scoop it up.

For the deciding game, Luis had a mulligan and neither player had any early plays, with Luis playing a Scarwood Treefolk off two Mountains and two Forests on turn four being the first play. Quentin had a quick Crookclaw Transmuter and Penumbra Spider to reply, but Luis's attacks, Hedge Troll, and Grapeshot took Quentin's board down to the black spider token.

Erratic Mutation proved an ample answer to Sedge Troll #1, only for a second to arrive, making life slightly difficult. There were still no Plains for Scott-Vargas, though, and when Quentin played a kicked Citanul Woodreaders, he seemed pretty confident. Quentin had a morph, which attacked, and the following turn, a Dream Stalker that allowed him to kick out his green card drawers again. Both players had many cards in hand, but Quentin seemed well on top, as Luis was in a rough spot without any access to white mana.

Quentin's morph hit for value as a Slipstream Serpent face-up, taking Luis down to 10, shortening the clock a little. A kicked Pouncing Wurm the following turn stopped the clocks entirely. Time for Luis to scoop them up.