became a little more tense this round. Both teams had started the tournament well, but only one group was going to be able to claim 4-0 status. On the one side was Average Homeboys, a rather potent collection of European Pro Tour elite. Opposing them is team Two-Headed Giant, a harsh dig at third member Mike Flores. The pairings:

Mike and Raphael were in the hot seat this round, literally. The bright lights of the feature match area were beating down on the A match, prompting them to ask Randy Buehler for dimming mercy. 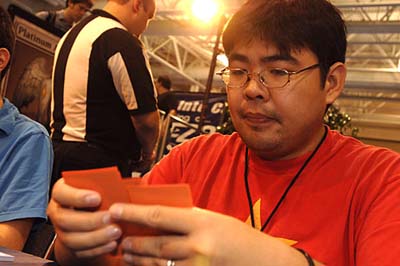 Mike felt the heat under the glare of the feature-match lights.

It turned out Raphael was not playing a Glare of Subdual deck at all, but rather a straight Simic creation. Efficient creatures like Plaxcaster Frogling and Vinelasher Kudzu combined with Cytoplast Root-Kin made for an effective attacking force. Remand, Plaxmanta, and Cytoshape gave Raphael some disruption as well.

Across from Raphael was Mr. Flores, insightful deckbuilder, dedicated father, and magicthegathering.com's own. Mike was playing what appeared to be a straight Orzhov deck, pitting a two-color deck against two-color deck.

In the first game Raphael came out very quickly with his Vinelasher Kudzu, Simic Guildmage, and Cytoplast Root-Kin. Mike's first play was a Mortify on the Root-Kin, while bemoaning how far down on tempo he was. Raphael made soothing noises, and in an eerie bit of prescience, told Mike he'd win the next two. Mike did declare the matchup excellent, but still fell to the speedy creatures in Game 1.

Geoffrey and Paul seemed content to skip their match, perhaps hoping their team's record would be decided before they actually had to play. With a withering look from the remaining four teammates, the two competitors began just as the A seat was finishing their first game.

Geoffrey was playing a very aggressive red-black-green-white deck, against Paul's five-color "good stuff" deck. In the first game, Geoffrey started out strong with a couple of creatures, who quickly got blown away by a Savage Twister. A Blind Hunter came down on Geoffrey's side, which fell to Wrecking Ball. At this point, all Geoffrey had in play was a single Seal of Fire to Paul's plentiful kill spells.

Unfortunately for Paul, his deck wasn't able to provide him any kind of creature to take advantage of Geoffrey's empty hand. With no time constraints, Siron was able to put together a rather effective burn suite. After many turns of draw-go, Geoffrey blasted Paul with Lightning Helix, Lightning Helix; untap, cast Char and use Seal of Fire for the win.

In the second game, Paul was forced to mulligan twice, yet still came out very well against Geoffrey's deck. An early Skyknight Legionnaire from Paul combined with an Angel of Despair and multiple kill spells kept Geoffrey on the back pedal.

Geoffrey, with a Blind Hunter in hand, drew a Blind Hunter and traded it with Paul's Skyknight. Geoffrey then drew a Lightning Helix and used it plus the second Blind Hunter to kill the Angel of Despair and trigger a double haunt. Paul, at four life, played an Angel next turn and swung, bring Geoffrey back down to three life. Deciding to win, Geoffrey peeled a Char off the top, killed Paul and won the match with a single life to spare.

While this savage topdeckery was taking place, the two control decks of seat B were having their battle. Steve Sadin was playing the popular red-blue-white Firemane Angel-Searing Meditation deck. Jelger was with green-black-white control, splashing Blue for Simic Sky Swallower. Yes, in Ravnica Block Constructed, three-color decks like to splash.

This game started on an interesting note, as Jelger could not decide whether to mulligan. When asked for advice, Raphael laughed the decision off. The decision ended up being so close they decide to rely on a coin flip on whether to mulligan or not. The coin comes keep side up, so they're off to the races.

Jelger's opening was quite strong, with a Selesnya Signet leading into Civic Wayfinder. Why was this a tough decision? Steve's start is far slower, his first play being Muse Vessel. Next turn Steve activated the Vessel, stealing an uncastable Crime//Punishment. Jelger decided that was a good signal, and cast the adorable Simic Sky Swallower. Steve had Ends, of Odds//Ends, to handle SSS but Jelger craftily cast Nightmare Void pre-combat, removing the split card from Steve's hand. Simic Sky Swallower bashed in unimpeded. A Firemane Angel from Steve bought him a turn, but SSS crashed through for the final points, a theme that's been repeating all weekend. 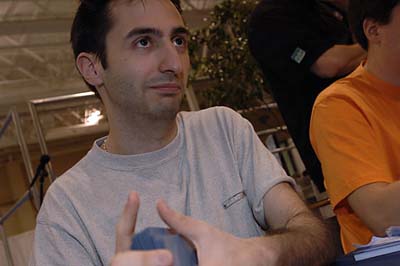 Levy's Game 2 mulligans set him back.

With one match and one game safely in hand, Raphael turned back to the task of beating Mike for the round win. Unfortunately for his deck, he had to mulligan twice. His five card draw was excellent however; a Birds of Paradise prompting a turn-two 2/2 Vinelasher Kudzu, who threatened to grow much bigger. Mike merely played an Orzhov Signet and passed, allowing Raphael to play a land and Moldervine Cloak on his Kudzu.

An epic swing brought Mike much lower, but Mike upped the ante with a turn-five Skeletal Vampire, a difficult card for the Simic guild to handle. Levy did have the Cytoshape, but with no Graft creature in play, passed the attack to play Cytoplast Root-Kin and Simic Guildmage, leaving himself another Root-Kin and the Cytoshape. Mike played Castigate, removed the Root-Kin and then tapped everything for a convoked Hour of Reckoning, absolutely devastating Raphael's board and leaving Mike with his 3/3 flier. Raphael made an attempt to come back, but a second Skeletal Vampire from Mike had him reaching for his sideboard.

In the second game of the Sadin/Wiegersma match, Steve started with a mulligan and a Compulsive Research. Jelger developed his mana perfectly, casting Civic Wayfinder off a Signet. A turn-four Nightmare Void from Jelger showed Steve with double Mimeofacture, double Train of Thought, and a Demonfire. The Mimeofactures looked to duplicate Jelger's Civic Wayfinder, but Jelger made Steve discard Train of Thought.

Both players added to their mana and cards in hand with multiple Signets and Compulsive Researches. Jelger got in discard and damage when he could, but he took a big blow when Steve's Mimeofacture was cast and replicated to get two of Jelger's Loxodon Hierarchs into play. While both players were lots of life, Steve's card-drawing spells continued to give him the answers he needed. Two Firemane Angels were all he needed to beat Jelger, Simic Sky Swallower no where to be found.

For the final game of the Flores/Levy match, Raphael again started with a Birds of Paradise and Vinelasher Kudzu. Raphael played Dryad Sophisticate then Simic Guildmage, threatening Remand mana. Mike appeared to take the bait and tried to cast Last Gasp on the Simic Guildmage at the end Raphael's turn. Raphael spent a good 30 seconds decided if the Last Gasp could resolve, ultimately allowing it to. Mike untapped and cast Culling Sun, which was quickly Remanded back to the hand. Raphael made his large attack and cast Cytoplast Root-Kin, his Culling Sun-proof creature.

Mike did indeed play the Culling Sun next turn and when Raphael played another Root-Kin, Mike cast Hour of Reckoning as well. Raphael could only look on as Mike laid out Skeletal Vampire, Belfry Spirit, and Ghost Council of Orzhova, bringing in unstoppable damage for the game and match. 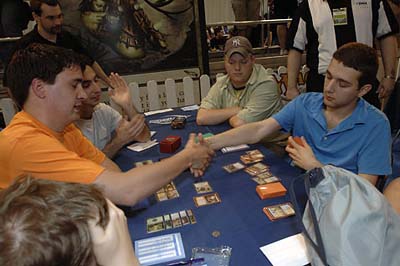 Jelger finished off Sadin for the match win.

The teams were tied at this point with one match apiece as the Wiegersma/Sadin match entered its third game. Both players started out with Signets. Jelger once again boosted with an early turn Civic Wayfinder. The 2/2 received an Electrolyze, and a later Hierarch took a large Demonfire. At six mana, Jelger Putrefied a Signet of Steve's. Undaunted, Steve tapped all his blue mana for a doubled Train of Thought. With his opponent tapped out, Jelger decided this was the time to cast Simic Sky Swallower, and after a quick consult, his observing teammates agreed.

Steve played nothing on his turn and passed it back, threatening an Ends. Jelger had the answer in Rolling Spoil, destroying Steve's only source of Red mana. After the SSS attacked, Jelger played a Loxodon Hierarch, his Ends magnet. As expected, the next turn Hierarch attacked alone and ate the red-white Diabolic Edict. SSS attacked the turn after and died to another Odds//Ends. With a shrug, Jelger replaced it. Steve decided to forgo bluffing a third Odds//Ends and tapped out for a massive Train of Thought. Unfortunately for his team, there were no answers and the flyin' leviathan scored yet another win on the day.