Round 4: Teammates to the Death 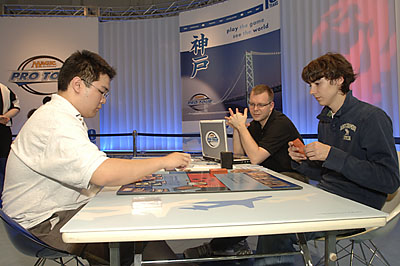 at the 1-2 draft table is never a particularly fun time. Both of these players lost an entire day flying to this country, and they obviously don't want to see their weekend end after only four measly rounds. Of course, facing a fellow teammate on the National Team just makes it that much worse, which is why U.S. Nationals winner Paul Cheon and runner-up Ben Lundquist groaned when they saw the Round 4 pairings. Nothing could be done, obviously. They simply shrugged and faced that fact that one of their Pro Tours would be over in less than sixty minutes. 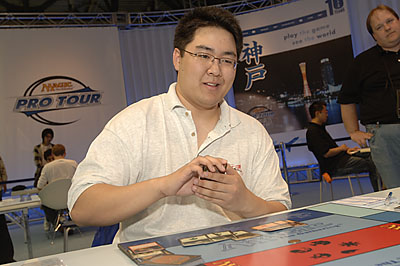 Cheon opened the game with a Thallid Shell-Dweller, while Lundquist cast the saucy Urborg Syphon Mage, only to see it die immediately to a kicked Thornscape Battlemage. Lundquist answered right back with Coal Stoker and Orcish Cannonade. Removal continued to fly from each side of the board as both players struggled to keep a creature in play.

Coal Stoker, Magus of the Mirror, and Clockwork Hydra all fell outside of battle, while the life totals hardly moved. Finally, Lundquist managed to make a Stoker stick on the board for a couple of turns and started taking 3-point bites of Cheon's life. Sedge Sliver added to Lundquist's beatdown, and Cheon packed it up, too burdened by the flood of land to make a further game of it. 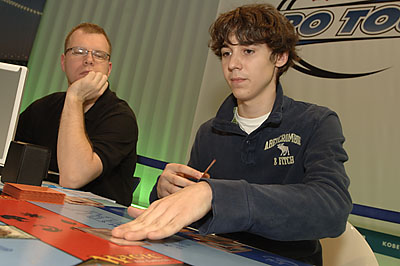 Lundquist brings it to the red zone.

The early turns of Game 2 were quiet ones, with Cheon suspending a Durkwood Baloth while Lundquist cast a Foriysian Totem and then followed with Eron the Relentless. Eron bashed for a turn before the mortars started whacking creatures faster than snitches in a season of The Sopranos, with Orcish Cannonade taking down the Legendary Human Rogue.

Lundquist played his removal trump with Sedge Sliver, adding Fire Whip to it, but Cheon trumped right back with Lightning Axe and Strangling Soot to get past Lundquist's regeneration mana.

This time it was Cheon's turn to attack with a hasty Eron, but obviously he died a turn later, this time to Lundquist's Strangling Soot, before Ben cast Basalt Gargoyle, which stuck around even past its echo payment.

Meanwhile, Cheon was getting some traction behind Clockwork Hydra, making the life totals 6 to 8 in his favor, but Tendrils of Corruption killed a post-combat Jorael, Empress of Beasts to put Lundquist ahead again. This allowed Lundquist to beat for the win two turns later, eliminating Cheon from Day 2 contention. Looking at Lundquist's deck, he has a very real chance of running the table and getting the 3-0 necessary to keep on drafting.