Round 4: Terry Tsang vs. Anthony Ferraro 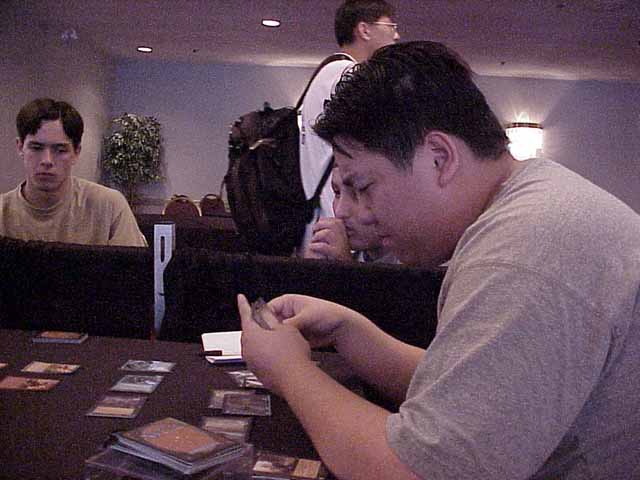 Terry Tsang seemed very happy with his deck when he sat down to take on Anthony Ferraro. Ferraro and Tsang were thought to have the two best decks at table 2. Ferraro's is a tight red/green and you can click here to read about how Tsang got his own black/blue beats.

Game 1 was bloody. Ferraro led with Stampede Driver, Fault Riders, and then Darba. Tsang played a turn 3 Belbe's Percher, followed by Rhystic Scrying on turn 4 and on his 5th turn he played Spiketail Drake. A lot of players, in Tsang's place, would have been tempted to use Sever Soul to destroy the Darba instead of playing the 3/3 flying Drake. However, Tsang knew that he'd been a much better position if he just took a bunch of damage while building up his own offense. Ferraro smashed him for 9 on Ferraro's next turn (dropping Tsang to 6), but Tsang cracked back for 5 in the air and then used Sever Soul to swing the race back in his favor. Ferraro answered with a Scoria Cat, but Tsang just chump blocked it, used Seal of Removal to bounce the Fault Riders, and bought himself the two turns he needed to win the race with fliers. Primeval Shambler came down on Tsang's next turn to make block on the ground while Steal Strength sped up his fliers by a turn and Tsang won going away. 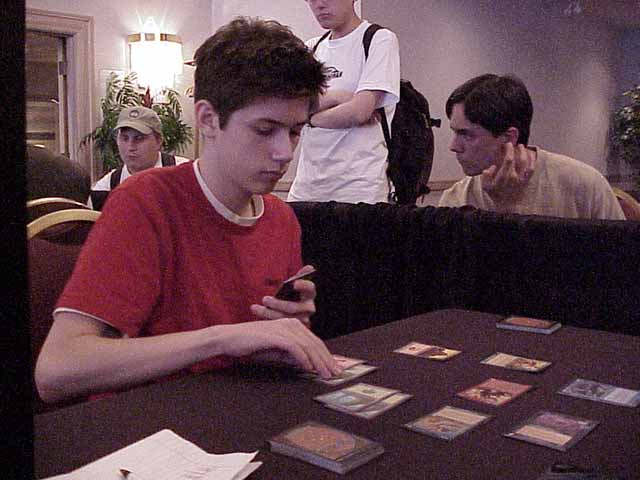 Ferraro had another super-fast draw in game 2. He played Stampede Driver, Pygmy Razorback, Fault Riders, and then tapped out for turn 5 Hired Giant. Tsang built up his own offense with Belbe's Percher and Fen Stalker. His creatures certainly aren't as aggressive as Ferraro's, but their evasion abilities proved to be important. After Ferraro's Hired Giant allowed him to get a second Island out of his deck, Tsang used Withdraw to return both Hired Giant and Fault Riders to Ferraro's hand. When Tsang then added Spiketail Drake to his army, Tsang had 8 power worth of evasion creatures. Ferraro couldn't deal damage quickly enough on the ground nor could he kill the Percher, Drake, or Fen Stalker. Hired Giant turned out to really hurt Ferraro and Tsang won the match 2-0.