Round 4: Terry Tsang vs. Brian Selden 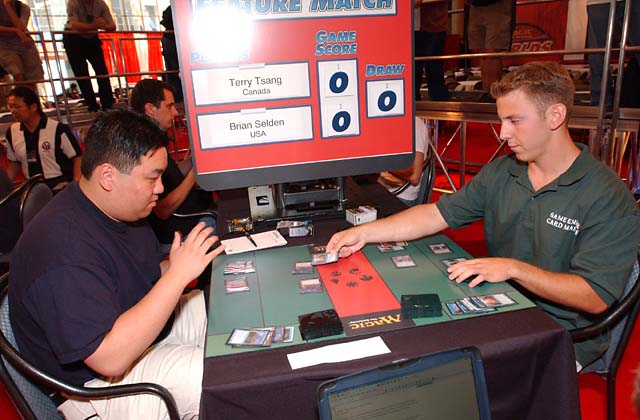 Terry Tsang is the current Canadian National champion. He won the title a few weeks back in Ottawa, and is looking to lead his team to victory this weekend on home turf. In his way this round is Brian Selden, an individual who is no stranger to Worlds. He won the tournament back in 1998, and is looking to become World Champion for the second time this week. Tsang is playing a modified version of the Skies deck that he used to win Canadian Nationals, while Selden is running Saproling-Opposition.

Tsang went first, but had to mulligan his opening hand. Chimeric Idol was cast on turn three, and Counterspelled. Another Idol showed up on the following turn, and resolved. Meanwhile, Selden cast Opposition. Another Idol was played and resolved, and the first went into the Red Zone to deal three damage. Selden played an alternate casting cost Gush, followed by Static Orb, which resolved. There was a bit of confusion at this point, as Selden may have tapped one too many lands. After going over the situation a few times, it was established that Selden did in fact have a mana floating, which caused him to burn for one.

Meanwhile, Tsang's Idols got to work, dealing six damage. Selden tried to stop the bleeding with Waterfront Bouncer. Tsang added Foil to the stack, but Selden used Thwart, allowing the Bouncer to resolve. This gave him a "tapper" to work with, and Tsang only got through for three damage on the following turn. The Bouncer brought back an Idol on Tsang's following attack step, and Tsang was now feeling the pressure of the lock. After a few turns passed, Tsang played a Bouncer of his own, which resolved. Selden tapped out on end step to play Fact or Fiction. The piles presented were forest/Yavimaya Coast and Waterfront Bouncer/Opposition/Sleight of Hand. Selden had no green mana at this point, which made the decision somewhat difficult. After some thought, Selden took the two green lands. The Bouncer now tapped down the Orb, allowing Selden to untap everything on his turn. 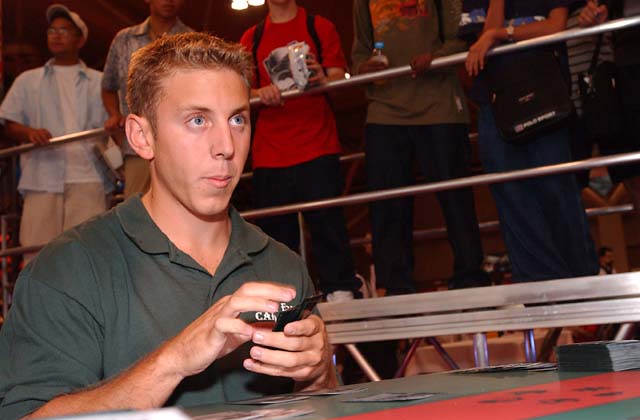 Spontaneous Generation was then cast by Selden, and Tsang added an alternate-casting-cost Gush to the stack. He then played Foil, while Selden played an alternate casting cost Thwart. Tsang added yet another Foil, and the Generation did not resolve. If it did, the game would have certainly been over. The end of Tsang's turn saw the Bouncers send each other back, and Selden's Bouncer came right back down again. Tsang's Bouncer came back out as well, and Selden used his Bouncer to tap down Tsang's Idol during the attack step.

Once again, Selden played Spontaneous Generation. This time, it resolved, and Selden got five Saprolings to lock down Tsang. Terry's Bouncer went to work killing off some of the Saprolings, but it had quite a bit of work to do. Selden untapped and sent back Tsang's Bouncer. Facing down an army of Saprolings and both pieces of the lock, Tsang conceded.

While shuffling, Selden asked, "Did you change the Rootwater Thieves to Bouncers yet?" Tsang replied, "I played Bouncers at Canadian Nationals!" There was then some discussion about the Bouncer's merit against CounterRebel, and Tsang mentioned that he sided in eleven cards against Gary Wise's Rebel deck at Canadian Nationals.

Tsang went first again, and both players simply played islands for the first few turns. Selden broke the monotony with Spiketail Hatchling, which was Foiled by Tsang. Selden added Gainsay to the stack, allowing the Hatchling to resolve. The Hatchling attacked, and Tsang answered back with an alternate casting cost Gush on his turn (tapping the lands before they were bounced) and Alexi, Zephyr Mage. Selden played Foil, but Tsang used Misdirection, and Alexi hit play. Selden then summoned a Stinging Barrier. Once it became active, it bounced back the Barrier and Hatchling on Selden's end step. 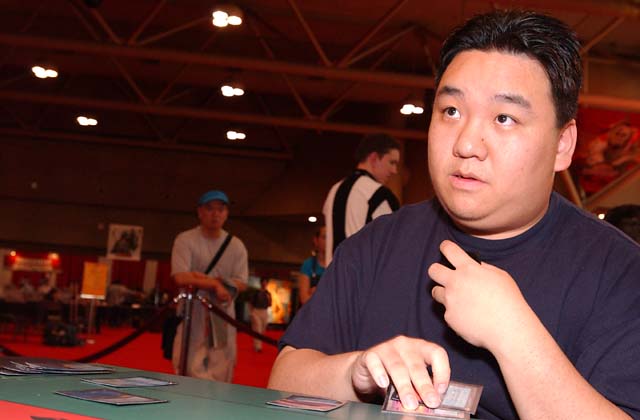 With the path cleared, Alexi went into beatdown mode, serving for three. She was joined by Troublesome Spirit, and Tsang now had an impressive army at his command. Selden untapped and played an Opposition, and then replayed the Spiketail Hatchling, which Tsang countered with an alternate casting cost Thwart. Selden summoned Waterfront Bouncer on the following turn, as well as Stinging Barrier. Alexi was tapped on Tsang's upkeep, and it was used in response to bounce back Selden's team. The Bouncer and Barrier came back down again, and this was a pattern Tsang could not afford to continue following. Alexi bounced back both creatures once again, and Selden simply replayed them when his turn came around.

At this point, Tsang needed a way to break out of the lock. Alexi wasn't getting the job done, because it forced him to lose two cards a turn just to keep up. A second Troublesome Spirit was summoned, and Tsang now had one more creature out than Selden, giving him a slight advantage on the board. However, he had only one card in and, and was tapped out. Selden took full advantage of the situation, and played Static Orb to complete the lock. Spontaneous Generation followed, and Tsang scooped.

After the match, Tsang mentioned that the matchup usually favors his deck, but the fact that Selden had Waterfront Bouncer made the difference. Selden mentioned that the Bouncer is good, because Meddling Mage can otherwise show up and shut down one of the combo pieces.