Round 4: Thinking Things Through

start of this match between our reigning world champion Katsuhiro Mori and perennial fan favorite Olivier Ruel is delayed as Olivier is distracted posing for photos with his ever growing legion of fans. Mori is even displaced from his seat in the feature match area as an Olivierite insisted on getting a picture taken shaking hands across the table with his idol.

Olivier won the die roll and was now on the play. Turn two for Ruel played out like so many do in limited these days: karoo land, go. The two-turn karoo or Signet has become such a staple in Magic these days players have actual been known to drop their jaws in disbelief when turn two plays out any other way. Katsuhiro Mori played Azorius First-Wing on his second turn and continued to come out of the gate flying with a turn-three Sell Sword Brute. Olivier decided to put some creatures on the table with a Keening Banshee that eliminated the Brute and shocked Mori in the process. 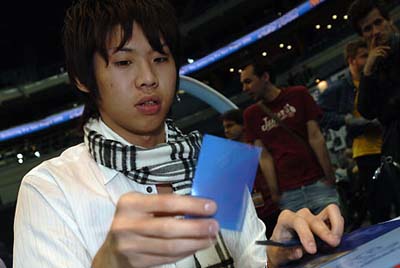 Mori would not be taunted by Olivier.

A few turns later Olivier attempted to taunt Mori into blocking with numerous eyebrow raises and some chin-stroking, but Mori - ever the wily vet - would not be goaded into putting his Conclave Equenaut in the way of Banshee. Olivier seemed disappointed that his trick would have to remain in his hand for another turn.

More determined than ever now, Olivier tried more of the same a couple of turns later by steadfastly refusing to give his Roofstalker Wright flying, but again Mori stranded the ever-looming combat trick in Ruel's hand by declaring no blocks. With Ruel now free to spend all his mana, he decided to commit the unkillable Cerulean Sphinx to the board.
After some more attacking from Olivier, Mori finally decided that he had had enough and blocked the red-zoned Keening Banshee with his Shrieking Grotesque. And what was the combat trick Ruel has been clinging to? None other than the Dissension split card Trial/Error.

With combat damage now on the stack Olivier used the Trial half to return to hand all creatures that the Shrieking Grotesque blocked. After the Grotesque is put into the pit, the Banshee immediately returned to play to further cripple Mori's board by killing off another creature. With nothing now staying in their way, Ruel's flyers finished off the game.

Between games Olivier thought about siding in Castigate for Demon's Jester, but after sleeving and unsleeving and sleeving again he finally decided against it. 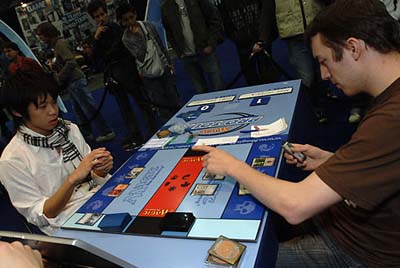 Ruel vacillated on his plan of attack.

Game 2 started with a turn-two Azorius Guildmage. Mori set Ruel back a turn with a main-phase Repeal. Moving ahead a couple of turns and we learned that Petrahydrox is just no match to the recursive targeting powerhouse that is Azorius Guildmage, as it is bounced allowing the Guildmage got in there for two.

With both players adding creatures to board at breakneck speed it quickly becomes cluttered, and the gameplay slows to a molasses-like pace.

After a Divebomber Griffin attack from Mori, Olivier had to think long and hard about his counter attack. He almost attacked into a lone Bloodscale Prowler with his Roofstalker Wright and Guildmage, but paused. After some tapping and untapping of creatures, Olivier eventually decided that they will both go into the red zone. They uneventfully deal their damge to Mori as the Prowler decided that it does not want to honorably die on defense, choosing to live to fight another day.

Olivier then added the nigh-unblockable Guardian of the Guildpact to his board that also included a Seal of Doom that quickly found itself being aimed squarely at the Divebomber Griffin's head.

Again Olivier paused, thinking twice and maybe even three times about his attack step, but eventually decided to sent the whole team into combat, dropping Mori to 8. Blind Hunter joined the fun and quickly made the race 15-6 in favor of Oli.

Mori then went into the think tank on his turn trying to figure out how to swing this game around. He emerged from his thoughts with the Prowler going on the offensive. Olivier actually had to be woken up after such a delay and chose not to block. Mori realized that the game is now unwinnable and conceded.