ecords will indicate that Ben Stark beat Gaudenis Vidugiris in the fourth round of Pro Tour Dragon's Maze. What they won't really show is that there wasn't much Magic actually being played. 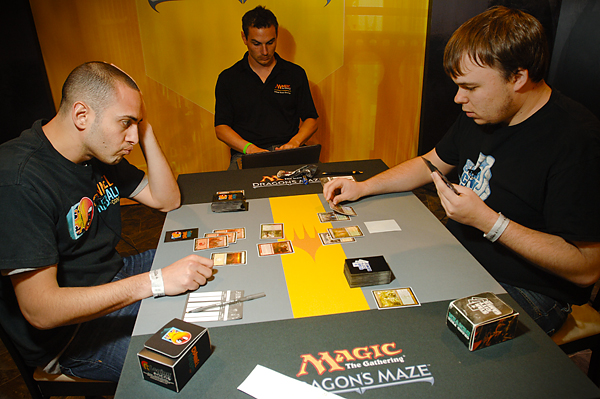 Both Ben Stark and Gaudenis Vidugiris played through three very quick and very lopsided games of Magic in Round 4.

"Zero games of Magic in three. I guess I signed up for that when I played this deck," said Stark, who was battling this weekend with a nearly Mono-Red beatdown deck that prominently featured such Constructed all-stars as Foundry Street Denizen, Firefist Striker, and Gore-house Chainwalker.

The first game featured Stark sending one-land and zero-land hands back before settling on one that had two lands and two Burning-Tree Emissaries. All it took for Vidugiris to clean that mess up was a Voice of Resurgence and a Supreme Verdict. From there, it was mostly academic when Ætherling hit the table. 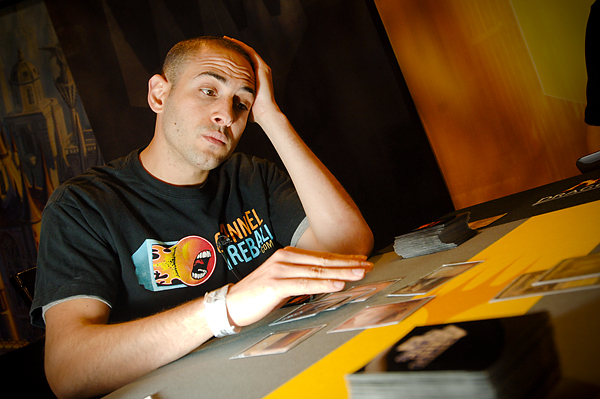 Stark agonizes over a first game that was completely out of his control.

The second game was a bit more exciting...for Stark.

Foundary Street Denizen into Firefist Striker into Rakdos Cackler and a second Striker, all backed up by a Legion's Initiative, meant even Gatecreeper Vine, Loxodon Smiter, and Supreme Verdict couldn't keep pace.

But at least he got to play his third land. In the third game? Not so much.

The Team SCG player made a show of it with three Voice of Resurgence to try and stymie another blazing fast start from Stark, but two Legion Loyalists blanked the tokens and made blocking virtually impossible. Though the ending took several turns for Stark to set up, Vidugiris never stood a chance with Centaur Healer and Loxodon Smiter stranded in his hand.

"You mull to five, I don't draw land three," Vidugiris said. "It happens." 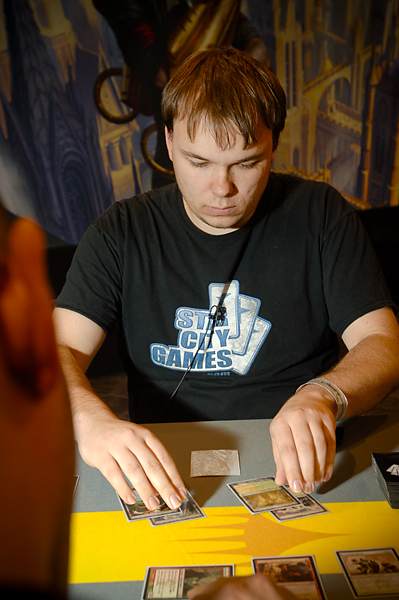 While fortune favored Vidugiris in the first game, the same could not be said for the second or the third game.

Stark said after the match that, while he had no idea how the match should play out should actual games of Magic happen, as Team ChannelFireball hadn't really paid much attention to Bant,, there were some scary cards in Vidugiris' deck. Loxodon Smiter and Centaur Healer are both bigger than the red deck can typically handle and, without Firefist Striker, Stark said he basically can't attack into 3/3s or bigger.

That, at least, is part of the reason why Stark and others chose to splash Boros Charm and Frontline Medic, giving them more ways to get through giant blockers. Still, he estimated the matchup verses Selesnya decks was no better than 50/50.

The matchup he did like, however, was Esper, which is certainly out in force this weekend. In fact, Stark chose the deck precisely because he knew Esper would be the most played deck on the weekend (and it is), and the Boros Blitz deck is very well favored against it, despite how Stark feels about some of the individual cards in the deck.

"Our creatures are some of the worst I've ever played in a Constructed tournament," Stark said. "I'm just dumping a bunch of stuff on the board and just hoping."

Match notes: There were three ties on the dice rolls to start the match. Stark eventually won. Then he was forced to mulligan to five...before the match, Stark said the following:

"Every time we finish the draft, I'm just so mad. I just feel so advantaged in Draft, then I have to play a stupid Constructed deck. I just want to draft again."

"I have to say, I feel just the opposite."