Round 4: Tomi Walamies vs. Gabriel Nassif

Both players are coming off of Top 8 finishes at Pro Tour Venice. Tomi made it all the way to the finals when he ran afoul of Magic's new golden boy, Osyp Lebedowicz. Despite being off the train coming into Venice—he Q'd on rating—his finish was strong enough to get him into the final Masters event. On the other hand Nassif, who lost in the quarters to William Jensen, needed to get here the hard way—via the Gateway. 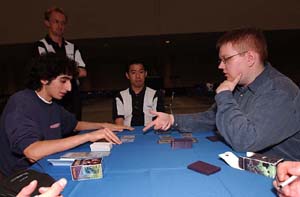 After some deliberation about what constituted heads and tails on Japanese coins, Gabriel lost the flip, which prompted the following exchange, "I have lost all of my coin tosses today."

No doubt thinking about the $6,500 he had locked up so far—and the potential to win $25,000—Gabriel grinned, "I have gotten over it already!"

Tomi is playing a Pattern of Rebirth combo deck and Gabriel is playing Enchantress.

Tomi started out with a Treetop Village while Gabriel took one form his Yavimaya Coast to cast Wild Growth on his land. Gabriel was looking for a second land and cast a Wall of Blossoms and played Island. On his next turn he didn't find land and played two Fertile Grounds. Tomi was also hurting for land—he was stuck at three but he had a Bird of Paradise to help him out and he cast an Academy Rector.

A pair of Frantic Searches found Gabriel the land he needed and more. He was able to play an Argothian Enchantress, a Words of Wind and play a Serra's Sanctum. He found himself with some extra mana and sunk it into the Words.

Tomi cast a Cabal Therapy hoping to get lucky before he sac'd his Rector and named Argothian Enchantress and saw an Exploration and Wild Growth. When he sacrificed the Rector to flash it back he go a Pernicious Deed and named Wild Growth. Tomi sent the turn back with the threat of Deed for three and Gabriel was stumped, "How do I get out of this?" He decided that if Tomi was going to Wrath him out he could do the same and sent the turn back to his opponent.

Tomi was still tight on mana—he had only four in play including his Bird and he decided to play a Phyrexian Ghoul and sent the turn back with only one mana for his Deed. Gabriel decided to see if he could prompt Tomi to Deed for one by casting a series of one casting cost enchantments and using Words of Wind to return permanents instead of drawing a card. When it was all over Gabriel finished off by picking up his Enchantress and leaving Tomi with only two land and a deed in play.

Tomi played a land and was forced to discard two cards—Visara and a Ghoul. Gabriel did nothing and sent the turn back to Tomi who still was missing a fourth land drop and he discarded a Parallax Wave. Gabriel activated Words of Wind during his draw step and returned his Wall of Blossoms. When he played the Wall he activated the Words again and Tomi Deeded for 3 in response. Gabriel floated a boatload of mana and played Enchantress and Enchantress' Presence when the dust cleared. 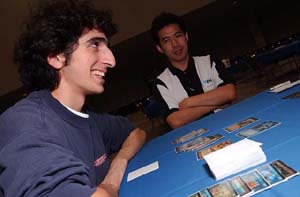 Tomi was still light on lands and the Words was going to be a problem if he didn't get something going soon. He played and Elf and a Bird and sent the turn back to Gabriel in pretty poor shape. Fertile ground yielded Gabriel two cards another Words of Wind found him two more and now he was in business. Exploration drew him a card and bounced a permanent each. Seal of Removal did the same and then Gabriel sac'd it and bounced the Bird. Tomi had nothing and scooped when Gabriel played another Enchantress and showed him that he was going to bounce up to three cards every time he played an enchantment.

Tomi followed his opening turn play of Treetop Village with a Cabal Therapy naming Enchantress' Presence—there were TWO in the Frenchman's hand along with a Seal of Removal, two lands, Fertile Ground, and a ray of Revelation. "Why wouldn't you say Enchantress? I hate you!'

Tomi smiled behind the Engineered Plague in his hand. 'Perhaps I made a mistake?"

Gabriel had trouble recovering from the "double mulligan" that Tomi handed him and desperately searched for cards while Tomi played out a string of creatures—three Yavimaya Elders and a Nantuko Husk. Gabriel even went to so far as to burn a Bind on the activation of a Treetop Village. Things were starting to look up for him though when he cast an Enchantress and her Presence on the next turn. Seal of Removal drew him two cards and promised to buy a little time but when Tomi Duressed to see what cards Gabriel had drawn there was only a fistful of land. When he cast Engineered Plague naming Enchantresses the Frenchman scooped.

Gabriel broached the topic of a prize split with his opponent but Tomi already had arrangements with earlier opponents and was willing to take his chances on Game 3—hoping to boost his gross to $10,000 from $6,500.

Gabriel seemed tense about his opening hand and thought about whether or not to mulligan for a loooong time. Enchantress decks can often keep land-light draws if they have the right cards. Gabriel finally decided to keep and it was Tomi's turn to deliberate. After not as much time as his opponent he resolved to ship his hand back and kept his next set of six.

Gabriel kicked Game 3 off with Forest, Exploration and a Yavimaya Coast. Tomi took one form his Llanowar Wastes to play a Bird but Gabriel stunted his mana when he played an Enchantress and followed it up with a cantrip Seal of Removal and used it to bounce the Bird. Tomi played another wastes and took another point to replay the mana bird. 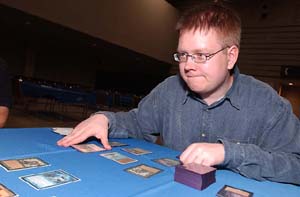 Victory was within Gabriel's grasp but he needed Tomi to not have a timely Engineered Plague as he played a Fertile Ground, which found him his second Enchantress, 'Please Tomi. Don't have the Plague...please."

Tomi did not have the plague and he was missing land number three but he was able to use what he had to cast Pernicious Deed. Tapped out—he sent the turn back to Gabriel who was tremendously relieved that his Enchantresses lived to see another turn.

Seal of Removal drew him two more cards and then Frantic Search put a ray of Revelation in the bin. A third Enchantress hit play and then her presence yielded Gabriel three cards. The Deed was Rayed away and the Seal returned the Bird. When Tomi got the turn back he had only two lands in play and he saw a hand of Exploration and another Ray of Revelation—he took the former—and replayed his Bird but the game was more or less over.

Gabriel drew something like twenty cards on this turn five and when he finally found the Words of Wind Tomi sighed and scooped.

Gabriel advanced to the finals although he was till unsure of who he would be facing, either Bob Maher. playing Tinker or Darwin Kastle playing The Rock. The other bracket fell so far behind on time that the semi-final match will not be played until Friday night.