Round 4: Trailing by a Hair

Coming into the fourth round at 3-0, 2011 Hall of Fame inductee Steve O'Mahoney-Schwartz was paired with 2010 inductee Brian Kibler. It was no surprise they were quickly ushered into the feature match area. 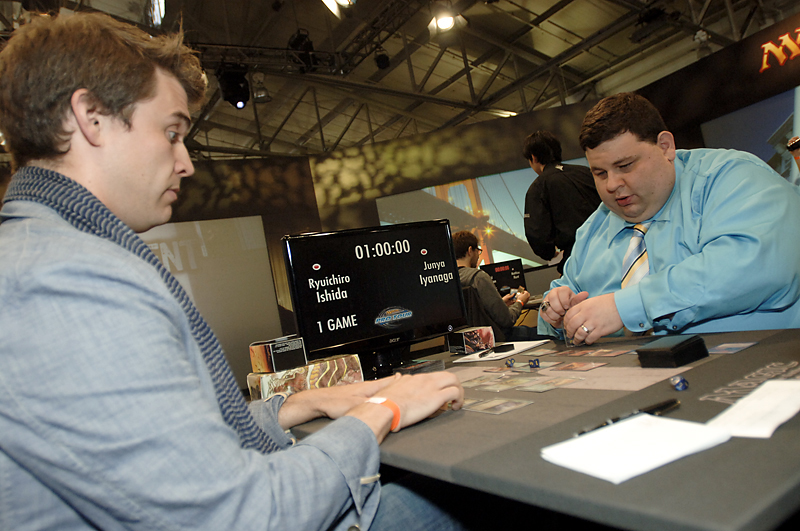 Two Hall of Famers makes for one excellent feature match!

Both players reminisced over the early part of this century, their hey-day, if you will, as O'Mahoney-Schwartz won the die roll. I asked O'Mahoney-Schwartz if he minded if I shortened his name to OMS in the coverage. "That's what it says on the ring," Steve replied with a grin, "that's why I couldn't get into the Hall of Fame until now. They couldn't figure out how to fit my name on the ring!"

OMS kept his opener, while Kibler threw his back. "It's really not a good hand once it has the second and third Mox Opal," he admitted with a laugh, before keeping his 6.

The game began with a Mountain from OMS, while Kibler exploded with a pair of Memnites, and a Glint Hawk. Most of which made a great snack for OMS's Arc Trail.

With the opening formalities out of the way, both players made bids for the mid-game. OMS went for the skies with a Chandra's Phoenix, and the ground with a Stormblood Berserker, while Kibler summoned a Glint Hawk Idol, and a metal-crafty Etched Champion. 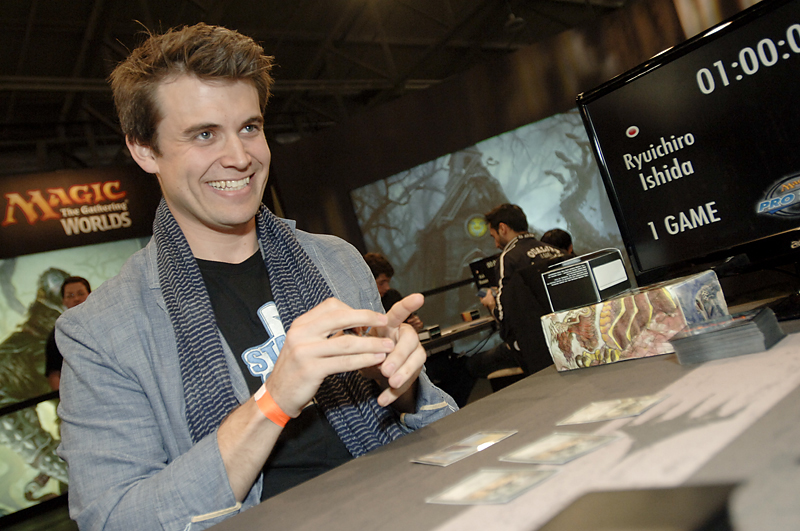 Brian Kibler lays some beats down with his Etched Champions.

OMS found a Shrine of Burning Rage for the Champion, but was forced on to the back foot when Kibler found a Tempered Steel waiting on top of his deck. A flurry of burn spells from OMS wasn't enough as Kibler found a second Champion to seal the game.

"I was happy I didn't see any green lands," Kibler admitted as he presented his deck, "so it's unlikely you have Ancient Grudge."

Both players kept their opening hands in game two, but Kibler's draw was much less aggressive this time, with his first spell a Spellskite. A Manic Vandal took down the 0/4, and OMS's Grim Lavamancer tottered across for 1.

OMS got aggressive with a pair of Chandra's Phoenixes, dropping Kibler to 15, before he Dispatched them both, and again summoned an Etched Champion. Creatures continued to trade on both sides of the table, but Kibler managed milk a little extra from his with a Moorland Haunt, just barely keeping enough artifacts in play to keep his Champion out of harm's way. OMS pushed his point with a Stormblood Berserker, Kibler falling to 13 as he tried to manage his artifact count. 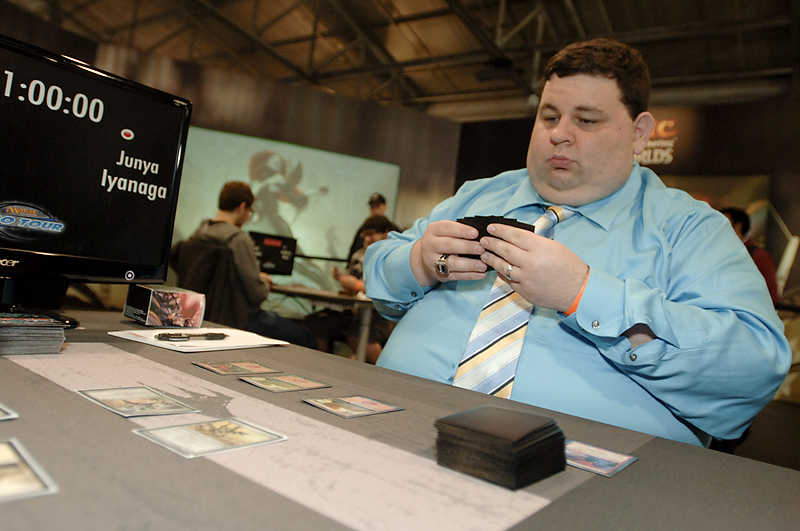 Steven O'Mahoney Schwartz's red spells started off sizzling, but his deck was eventually snuffed out by machines.

A second Grim Lavamancer from OMS looked to try and close the deal by making use of his own graveyard. OMS attacked Kibler down to 8, happily letting his creatures fill up his graveyard as he moved to his end game.

But Kibler wasn't done by a long shot. "You're on 17?" he asked, summoning a Hero of Bladehold. OMS could only frown and pass the turn back. Kibler then cast Tempered Steel.

"Um, yeah, that's nuts," OMS admitted. Suddenly on 6 life, and with nothing helpful waiting on top of his library, OMS packed up his cards.

1 Koth of the Hammer 2 Manabarbs
52 Cards