Round 4: True Giants of the Pro Tour

Having just completed the second draft of the day, the players entered this feature match at 2-1 with hopes of sweeping the table for a very strong 5-1 start, particularly given the strength of the decks they were able to put together for this pod. But matched up against each other right off the bat, only one would have that chance, and it certainly wouldn't be easy. Hall of Famer Jon Finkel surely needs no introduction at this point, but even though his opponent doesn't command the same star power, Andre Mueller definitely knows his way around the game. He's been on the Tour for years and managed to immediately re-qualify any of the times he fell off the gravy train, and he has Pro Tour Top 8s from PT–Philly in '05 and Valencia in '07 (where he finished 2nd), a pair of Grand Prix Top 8s, and also a team GP Top 6.

Mueller won the die roll, chose to go first, took a single mulligan, and the game was on. He led with Springleaf Drum which brought a real smile to my face, because the Drum has become something of a pet card for me in decks with lots of little guys in combination with quick tempo tricks and makes for a great shenanigans-enabler in most Merfolk decks. Since he used an Island to power the Drum out, any of that was possible and maybe even more. Next for Mueller was Plains and a Stonybrook Angler. Not bad for a mulligan on the play!

For Finkel, who was running a green-white attacking machine, the creature flood started with Woodland Changeling. Mueller whiffed on land for his third turn (making that drum look even better since he at least had a creature out) and passed the turn. Finkel went for a Kithkin Mourncaller, but Mueller was able to drop it with Broken Ambitions, helpfully sending a non-land card to the bottom of his deck in the process. Mueller had to pass the turn again on two land, and while Finkel was able to sneak in a Kinsbaile Cavalier that looked quite nice with his Woodland Changeling, Mueller found his third land and also dropped an Oblivion Ring on the double striker to keep things under control for now. 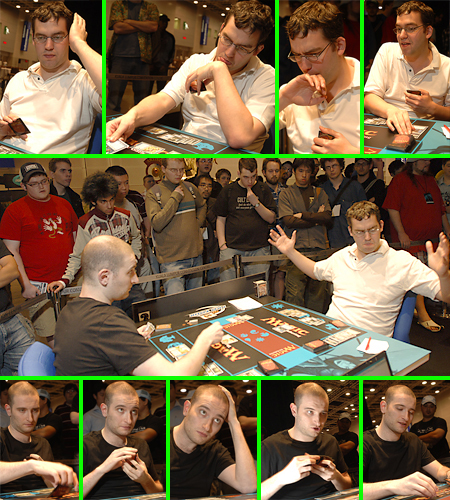 Finkel continued the pressure, this time with Hunting Triad for three Elves, but things looked to be turning around for Mueller when land #4 plus the Drum powered out a Waterspout Weavers to hold the fort. Unfortunately, the holding the fort plan didn't go so well for the Weavers, who promptly got smashed by blocking some of the Elf swarm only to fall to a devastating Briarhorn, wiping out Mueller's badly needed blocker and putting Finkel even further ahead on creature development.

Down to 12, Mueller passed the turn right back. Finkel played a Daily Regimen on one of his Elf tokens and sent in the whole team. Mueller's angler took an aura-free Elf down in one-on-one combat, and Violet Pall wiped out the Regimen-enhanced token. Down to just 5, Mueller played Changeling Berserker championing his Violet Pall token and passed the turn, needing the champion on defense for now. Finkel had other ideas, however, using his own Oblivion Ring to send the Berserker off to a calmer place. One attack later and Mueller was down to just 2 and dead on the board next turn. Ripping one final card, desperately needing an answer, Mueller came up short and quickly conceded.

Again on the play, this time Mueller chose to keep his opener, as did his opponent. For Mueller it was Ink Disolver while Finkel had Kinsbaile Skirmisher. Hitting the Dissolver's kinship with Tideshaper Mystic, Mueller sent three cards to Finkel's 'yard. Playing the Mystic he then passed the turn. For Finkel this time it was Kithkin Daggerdare along with a swing from his first Kithkin, dropping Mueller to 18.

Again the Dissolver hit its kinship, this time dropping a Kinsbaile Borderguard into the bin, which drew a significant look from Mueller. Understandably done with the milling plan for now, Mueller upgraded his dissolver to bigger and nastier "Merfolk," Changeling Berserker, dropping his opponent to 12. Finkel cracked back with both his kithkin making it 15 life for Mueller. Stuck without a fourth land, Finkel bought some time by running out a Kithkin Harbinger without actually putting anything on top of his deck. In came the Berserker, and sure enough the fresh Harbinger bravely stepped forward and took one for the team. Mueller followed up with a new Ink Dissolver and sent the turn back.

Perhaps inspired by the Harbinger's bravery, Finkel's deck offered up that badly needed fourth land. His Skirmisher made it Mueller: 13 and then Hunting Triad helped gum up the board with some badly needed ground defense.

Or so it looked for a moment anyway. After Mueller used his Tideshaper Mystic to generate an ominous second red mana, the dreadful Thundercloud Shaman smashed onto the field for 2, Wrathing Finkel's entire team and clearing the way for the Berserker in the process, putting Finkel on just 7 and now way behind on the board.

Kinsbaile Cavalier came out next for Finkel to trade with the Giant, but now he was down to 2 life. With the help of a Cloudgoat Ranger followed by another Hunting Triad for three tokens it looked like Finkel might be clawing back into the game, but once the creatures had all started trading off a Stonybrook Angler came down for Mueller that threatened to be too much for Jon to overcome. He did his best to find a way out regardless, getting the Angler to tap one of his tokens before the attack phase and then sacrificing the tapped one to play out a Changeling Titan, buying him one more turn to try and find some answer by managing to get another untapped creature into play to hold on. The best players manage luck by finding ways to at least give the chance to get lucky. This time it didn't work out however, and a turn later Finkel went down when his two blockers were tapped across the end of his own turn and then on Mueller's following turn, allowing the final 2 damage to get through at last.

This one started out much slower for both players. Finkel had the first play with Springjack Knight, which ran into Broken Ambitions. On his own turn Mueller played Research the Deep, with a clash that revealed lands on both sides. Mueller sent his to the bottom of the deck but Finkel chose to keep his.

Finkel had to pass his fourth turn with nothing but land, and while Mueller did the same he followed it up with an upkeep Pestermite on a land during Finkel's fifth upkeep. The Faerie came in for first blood and was joined by a Waterspout Weavers. Finkel had a great answer in Cloudgoat Ranger, and now we had a game on. Lunk Errant was next for Mueller, but that was all he could do for now, unable to attack past the Ranger for now.

In came the Ranger next turn, followed by Game-Trail Changeling, as the board continued to escalate with huge monsters. Mueller had one of the best of all for his turn, dropping out Thundercloud Shaman for 2 again. Lunk Errant came over solo but was blocked by a Game-Trail Changeling that gained some help from Fistful of Force, winning the clash for Finkel. Mueller sent a Plains to the bottom of his deck while Finkel opted to keep the Hunting Triad on top of his. The Lunk went off to the dumper but Mueller at least had a Shard Volley to finish off the Changeling (which, note, hadn't taken damage from the Thundercloud Shaman since it is itself a Giant, which was why the Volley couldn't be used to stop the Changeling before the Fistful of Force resolved).

Having managed to get through this Thundercloud Shaman episode far better than last time (as in "Hey look, I actually get to keep a creature!"), Finkel erased the Giant with an Oblivion Ring and sent his Cloudgoat Ranger in to drop Mueller to 14. Mueller was out of gas and things got decidedly worse next turn when the Hunting Triad he'd known was coming added three more beaters to the board, one of which got powered up with a Daily Regimen that had plenty of mana to go lethal. Drawing one last card, perhaps hoping for his own Oblivion Ring to return his Thundercloud Shaman back for one last huzzah, unfortunately for Mueller, he came up short.

Is this the event the Hall of Fame legend returns to Top 8 glory? At 3-1, sporting a great deck he gets to wield for two more rounds, and playing with a true determination to triumph, it certainly feels like this could be the event people have been waiting for since Jon returned to the game.