Round 4: From the Vault

Both Japanese standout Akira Asahara and Brazilian poster boy Paulo Vitor Damo da Rosa entered the fourth round undefeated at 3-0 and were looking to push their records even higher. With little chatter between the two Paulo quickly made a Bitterblossom on his second turn. That play had been lauded as one of the scourges of the Standard environment on the weekend, but many pros, despite recognizing Faerie’s power, had opted for other strategies. 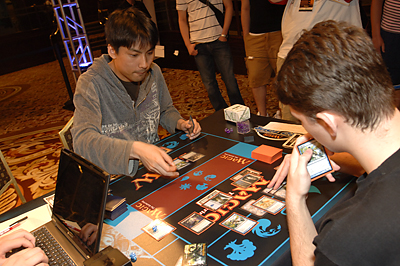 Akira Asahara and Paulo Vitor Damo da Rosa: Sixteen syllables of undefeated Magic mastery. Asahara quickly revealed a five-color strategy with a rather unique blend of cards. His turn-two Saffi Eriksdotter enabled his turn-three Fulminator Mage to destroy two of his opponent’s lands in one fell swoop. While that left the Brazilian behind on lands, his tribal enchantment was quickly putting him far ahead on creatures. The life totals stood 19-12 in Asahara’s favor after a flurry of attacks with Faerie Rogue tokens for Paulo and a Kitchen Finks for Asahara.

A Mulldrifter from the Japanese player threatened to provide a wall against da Rosa’s Faerie Rogue tokens, but Paulo had a trump in the form of Scion of Oona. With three Faerie Rogue tokens and a Mutavault able to attack, his opponent’s life total looked far more threatened than its lofty 19 points let on. In the background, an Ancestral Vision from da Rosa waited patiently for one more upkeep before coming off suspend.

Needing a solution to the Scion and fast, Akira Asahara attempted to play Murderous Redcap. His opponent was having none of it and quickly dispensed of the 2/2 with a Spellstutter Sprite’s comes-into-play countering ability. Asahara attacked with the Kitchen Finks, which Paulo was only too happy to “kill” at the cost of a single token. When the Finks re-entered play as a 2/1 it did put his opponent up to 12 life, but the Brazilian seemed to be firmly in control of the game. A Terror dealt with Asahara’s Mulldrifter, and an all-in attack from da Rosa sent Asahara deep into concentration. His only available blocker with flying was a Birds of Paradise, but all the 0/1 could do was chump before the Japanese pro fell to just 5 life. When he attempted a Reveillark that was met with Spellstutter, Sprite he quickly packed it in.

The players sideboarded silently, though whether it was because of a language barrier or simply because they were deep in concentration for the second game was anyone’s guess.

Asahara kicked the game off with a Birds of Paradise, and when Paulo made a turn-one Thoughtseize, the Japanese player revealed a risky hand to have kept: he had zero additional land! Still, his twin copies of Wall of Roots as well as Mulldrifter made the decision to keep a little bit more logical. Da Rosa forced Asahara to discard Kitchen Finks and ended his turn.

After accruing mana sans lands with Wall of Roots, Asahara attempted his first Mulldrifter via evoke. His opponent shook his head and revealed Rune Snag, forcing Akira to bin the 2/2 without having hit his second land drop. Still, things weren’t all bad, as his opponent was sitting on just lands with nary a Faerie in sight to get its beatdown on. When Asahara finally made his second land drop, things started to look not so good for the Brazilian competitor.

Not one to go out without a fight, da Rosa managed to keep the game stalled long enough for an Ancestral Vision to spin down to zero and net him a fresh influx of cards in hand. One of them happened to be a Mistbind Clique, but with no Faeries on the board it seemed like he wasn’t going to be able to utilize the beefy 4/4. All was not as it seemed, however. During his opponent’s upkeep da Rosa activated a Mutavault, which—with all creatures types—was in fact a Faerie. With no cards in hand, Asahara could only shrug as he was “Time Walked” by the land-tap effect of the Clique.

Whatever lands Asahara had been missing early in the game he was having no trouble finding them in the middle. Land after land poured off the top for him as da Rosa’s 4/4 got its beat on and a second Ancestral Vision counted down to 0. The fact the Brazilian had a full hand but wasn’t playing any spells almost assuredly meant his hand was filled with permission. When Asahara attempted to sneak a Greater Gargadon into play early by sacrificing a number of permanents, only to see it countered by Cryptic Command, he shrugged resignedly and extended his hand.