Round 4: Vincent Gan vs. Sam Lau

Waiting silently, like two sprinters at the starting line, Sam and Vincent held their composure and focus waiting for the OK from the head judge to begin. When it finally came at last hey could both relax and get down to business. 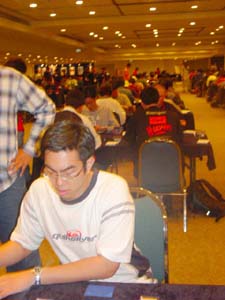 Vincent was carrying 2 byes into this event, and following an opening win is paired with Sam Lau, a local legend from Singapore.

Assuredly, without falter, Vincent is ready to go with his opening hand as after much thought and decision, Sam elects to mulligan 6 cards. The next 6 cards seem adequate and we begin our 4th round encounter.

Sam leads out wit a Goblin Grappler and a Goblin Turncoat, followed by a third turn morph from Vincent. With the flow and tempo of a constructed deck, the morph (a standout Skirk Marauder), is picked off as a Gempalm Incinerator as it is cycled. Turn 4 sees Vincent drop an third land type, an island to go with his forest and mountain, and Sam comments on the 3-colour special as he responds to Vincent face up Nantuko Vigilate with an Embalmed Brawler amplified for 1 (Noxious Ghoul). The 3-colour specialist however misses a 5th land drop, leaving himself open as Sam drops a Vile Deacon, and attacking with all and sundry the following turn to drop his opponent down to 7.

Gan finds a 5th land and is able to drop a morph, which Sam thinks is game as he casts dirge of the dread for the win. Vincent is able to cycle a Chocking Tethers to keep himself on 2 and looks to seeming have regained control o the match. He attacks however, leaving 3 defenders back to block Lau's 3 attackers. This proved to be his down fall as a Cruel Revival, which had been held in reserve removed the Vigilante giving Sam the win.

Sideboarding: Both players – No changes. 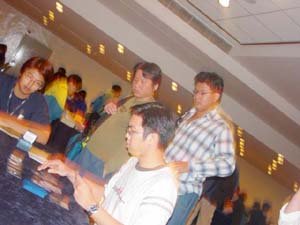 Again Sam is forced to mulligan to 6 but hey, but even though it worked the first time, he was wary of the tri-colour deck – unable to think why Vincent would be playing the blue splash.

Sam gets the first creature into play on turn 2 in the form of a Goblin Sledder which was delayed a turn due to a Forgotten Cave. Sam's run of good luck with hitting the right morph continued as a Shock put to rest the tempo killing Echo Tracer. Again, a land stall bothers Gan, who this time stalled at 3, dropping a Wirewood Savage which was no match for Lau's Magma Sliver. Land was finally found as two more of Gan's many morphs followed in respective turns as Lau's double block went horribly wrong as the morph that wasn't attacking turned out to be a Willbender. This not only caused the waste of a perfectly good Goblin Sledder but the demise of the Flamewave Invoker also involved in the block.

Gan happily traded 1 for 1 with Magma Sliver, which he follow with a sliver of his own – the token producing Brood Sliver. Lau pushed as hard as he could with his un-Embalmed Brawler (not amplified) as it was able to attack with a Threaten-ed Brood Sliver. Although netting him a token, it was lost as it had to block the 3/3 as it swung back next turn, and with sub-optimal late game drops such as Vil Deacon, Sam scooped as an Aven Fateshaper (nice blue splash!) and a Centaur Glade became active. 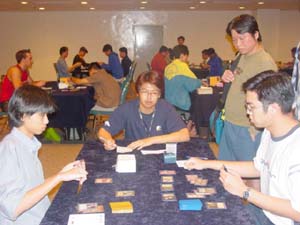 Sam pondered for a moment but decided hat for once he would keep the 7 cards he started with, and opened with a second turn Goblin Turncoat. He sense yet another stall for Vincent who played a Skirk Marauder face up on the second turn. Going for the kill he amplified his Brawler to 4/4 (Wretched Anurid & Noxious Ghoul) this time as Gan had to cycle a Barkhide Mauler to find a 3rd land (a third Mountain at that...). Even taking 3 damage a turn, Lau knew the race would go is way dropping a Wretched Anurid and then a Prowling Pangolin on successive turns – the match over as Gan was unable to find a fourth land until turn 6 – leaving him to lament the perils of a "3-colour special."