his Limited round features two faces all too familiar with U.S. Nationals means. Ben Lundquist and Luis Scott-Vargas finished second and third at U.S. Nationals last year, and, along with Paul Cheon, went on to take Team USA to a 13th-place finish at Worlds 2006.

The two players commented on the quality of each other's decks before the match began. "My deck has a bunch of fives and sixes. Kinda mediocre," Luis lamented. "Yours has a bunch of sevens and eights, but you've definitely got some twos, too."

Vargas started the match with a rather inauspicious mulligan. "Ugh. My hand was a bunch of green cards and plains." After keeping his six, he led Game 1 off with a turn-two Gemhide Sliver that got a Thrill of the Hunt to get up and over Ben's blocker on the next turn. Lundquist, meanwhile, played a morph and then used a Subterranean Shambler to wipe the little Sliver away. Over the next couple of turns, both players continued to add men to their sides of the board. 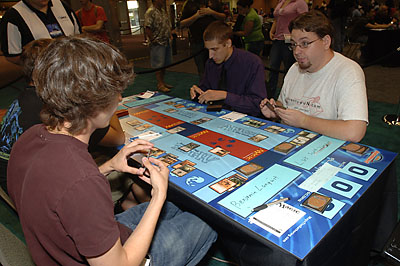 When Luis swung his Centaur Omenreader and Spider in, Ben unmorphed his Gathan Raiders by madnessing a Grave Scrabbler and threw both little men in the path of Luis' Centaur. Luis tried to Judge Unworthy the larger Raiders, but when his deck failed to cough up a 3-drop in the first three cards, he had to settle for the Evolution Charm on the top of his deck. Thanks to a flashed back Thrill of the Hunt, Luis managed to leave Ben with only a Subterranean Shambler and a Rathi Trapper.

Everytime one player got the advantage, the other managed to gum things up again. Ben started by taking control of the board with a Torchling. He then traded his Shambler for Luis's Centaur on its next attack, leaving Luis with only a Spider to match Ben's Torchling and Trapper. The Torchling took out Luis's Spider on its next attack. Luis used his new Evolution Charm to regrow his dead spider and return it to play. Ben took advantage of the opportunity to try and Enslave it, but Luis had the Whitemane Lion for the save. Torchling went to Luis's face and he passed the turn. Luis took advantage of the clear path to send his two men into the red zone. Ben untapped his Torchling and blocked the Lion, which found Strength in Numbers to take the big red man out of the equation.

Now, the game was back in Luis's hands. Ben tried to get some parity back with an Eron the Relentless, but he was forced to trade during Luis's next attack. At this point, the game took a "you raise me, I raise you back" mindset. Luis played a threat, and Ben found an answer-Rathi Trapper for Knight of Sursi, Fatal Attraction for Blade of the Sixth Pride, and Ichor Slick for another Knight of Sursi. Even when Luis used Yavimaya Dryad to give Ben a Forest, Ben just drew a Basal Gargoyle so he could use his Rathi Trapper on the forestwalker. Eventually, though, Luis was able to draw an Errant Doomsayer that Ben couldn't deal with, and it took care of the Trapper long enough for Luis to take the game.

Game 2 was a fairly anticlimactic way to follow up that first game. Ben lead off with a Rathi Trapper which Luis matched with a Gemhide Sliver for the second game in a row. Ben had a Greater Gargadon to suspend on his third turn, but he lacked a third land. Luis showed no signs of stopping as he continued to build his board with a Saltfield Recluse, Centaur Omenreader, and Penumbra Spider, all while Ben was stuck on two land. When Ben was forced to cycle an Ichor Slick simply to get a land, and failed to find one, the game was all but over. Two turns and only one more land for Ben later, the game was quickly over.