Round 4: Warren Marsh vs. Ryan Fuller

Ryan began by complaining that he always gets harder feature matches at Grand Prix than he does at Pro Tours and soon he and Warren are quipping about how Warren used to be some sort of magic player.

Warren's deck is a green, blue and red tempo deck, similar to the one made popular by David Price at Grand Prix Denver. Ryan's is a blue, black, and red control deck with few monsters.

Warren won the flip, chose to play first and opened with a Kavu Titan. Next turn, Warren played a Blurred Mongoose and attacked, while Ryan continued to just play out lands. Warren sent more beats and made no play on turn four, leaving four mana open, probably signaling he has Mystic Snake. Ryan tried to Recoil the Titan at the end of Warren's turn. Warren responded by Repulsing it, leaving himself with only one mana open.

Warren continued to send with the Mongoose. He then turned on the trash talking, telling Ryan that anything he plays is only going to get countered. Warren Prophetic Bolted Ryan at the end of the turn and Ryan thinks for a while before responding. He finally decides to accept the damage and goes to eight life. As Warren 'impulses' his hands are visibly shaking.

Ryan has drawn no answer to the Mongoose and tried in desperation to tap a land at the end of Warren's turn with Ice, just to draw a card. The Mongoose finally went all the way and Ryan scooped.

Warren continued to trash Ryan during the interlude, saying, "I think that it's a hard match for you to win unless you have 'tech' which you presumes have." Ryan just swallowed and said nothing. Warren sideboarded out Excludes as Ryan's deck showed no sign of creatures. He sideboarded in four Disrupt and two Gainsay.

Both players shuffled their decks exceptionally thoroughly. Warren asked, "are you worried about winning in the fifty-minute-long rounds?" Ryan quipped back, "I can manage to lose in ten minutes, so it's not too much for you to worry about."

Warren pondered over his opening hand. He looked like he was making complex calculations in his head. Ryan tried to get him to keep the hand, which made Warren laugh and struggle to think even more. Ryan's efforts seemed to be working on Warren and he tried to pressure him into making a decision. He finally flipped a coin to decide and kept the one land hand, which gets a chuckle from the crowd.

Warren had to discard on his second turn as he had not drawn a land. Ryan busted out an Emblazoned Golem with a +1/+1 counter. Warren found the Forest played a Gaea's Skyfolk.

Both players started to race with their creatures. Warren brought out the Mongoose again, forcing Ryan into an interesting decision - whether to block or attack and race the Mongoose. At the end of Warren's turn, he played Urza's Rage to kill the Skyfolk and took plenty of time during his turn deciding on his best course of action. It turned out to be passing the turn and holding the back Golem to block. Both players stood off but Warren still had only two lands to Ryan's five.

Ryan quipped to Warren: "For the sake of my tiebreakers, I would recommend not keeping the one land hands in the future." 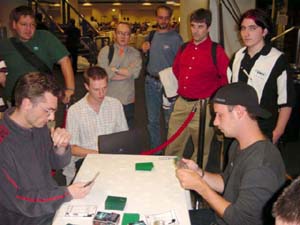 Warren spent plenty of time thinking about his best play and again taps one of Ryan's lands at the end of turn. Ryan responded by playing Fact or Fiction, which Warren split into an Urborg Volcano (his only source of black so far) and four other cards - Nightscape Familiar, Undermine, Fire/Ice and Island. Ryan spent plenty of time thinking about the decision. He finally took the solitary Volcano.

Warren finally got to four mana, playing a Jade Leech. It resolved and next turn attacked for five. Ryan used his Volcano to play a Nightscape Familiar that could hold off the Leech. Warren appeared to think for a while and discarded a card (Kavu Titan) at the end of turn. Ryan finally drew a second black source which enabled him to access to black spells in addition to regenerating his familiar.

At the end of Ryan's turn, Warren attempted to Repulse the Familiar. Ryan thought long and hard and responded with an Undermine. Warren Disrupted while Ryan had four mana open. Ryan pays the one, leaving him with three open mana at the end of his turn.

The Leech attacked again and the Familiar blocked and regenerated, leaving only an Island open on Ryan's side. Warren tried to Prophetic Bolt the Familiar, but Ryan used the Island to Gainsay. Warren tried to object that he can't counter it. Ryan asked why he can't and asked Warren, "what does Nightscape Familiar do," in a patronizing tone of voice. Warren was visibly shaken and looked nervous during Ryan's turn. While he had the opportunity, Ryan Voids for four killing the Leech .

Things now started to get interesting.

Ryan looked at Warren's hand and found nothing. He then picked up Warren's library and started looking through it, thinking he had played Lobotomy. Warren couldn't believe it and looked round with his mouth open, obviously in shock. The judge eventually asked Ryan what he thought he was doing and then went off to confer about the penalty.

The judge came back and reported a game loss. Ryan objected and asked for the head judge. While he was away, Ryan quietly points out to Warren, "it was probably a mistake to be drinking (alcohol) before the round."

Ryan explained that he was going to play Lobotomy on the same turn, and thought he had played it when he hadn't announced it nor tapped mana. The head judge announced a game loss and when Ryan complained, took him away from the watching crowd to explain his reasoning.

Ryan came back, picked up his cards and told Warren, "It's going to take a lot more talking than I'm capable of to get me out of that one."