Round 4: Warren Marsh vs. Scott Johns It was a "we're testing together for Tokyo" theme round in the Feature Match area during round 4. Alex Shvartsman and Brian Davis are among "the Rejects" while Warren Marsh and Scott Johns are members of "Godzilla" - the team made up of former European Alliance and former Mogg Squad members who rejected them in an effort to take Tokyo. London-based Warren Marsh is the only European pro to make the trip to Grand Prix Boston. It isn't because he thought Boston would be any easier than Cologne. Rather, he was in town visiting a friend and the Grand Prix happened to be in town too.

Scott Johns is playing a black/red/green deck that I reported a bit about earlier. Scott no longer believes he made any deck building mistakes - Gary Wise was merely misleading him. After looking at his opening draw, Scott announced "nothing's better for a good crappy deck than a good crappy mulligan." Neither player seemed happy about his card quality with Marsh describing his own deck as "merely average - which means I won't make Day 2." If they both miss Day 2, they'll be able to spend the rest of the weekend testing IBC (Invasion Block Constructed) decks. A lot of the pros here have spent time thinking and talking about that format.

Johns' deck didn't look so crappy when he played a turn 4 Phyrexian Scuta with kicker. Marsh's turn 3 Vicious Kavu just wasn't as impressive. Johns played aggressively - sending in the Scuta and challenging Marsh to attack back with the Kavu. A surprise Tsabo's Decree swung the race in Johns' favor and a Soul Burn finished Marsh off on turn 7. After seeing Marsh's hand (which included Hunting Drake and Marsh Crocodile), Johns knew he'd gotten a bit lucky that Marsh never drew an Island. With four islands and "one of those dodgy bounce lands" in his deck, Marsh knew he might not be able to support all of his blue spells and he even sideboarded out Rushing River for game 2. 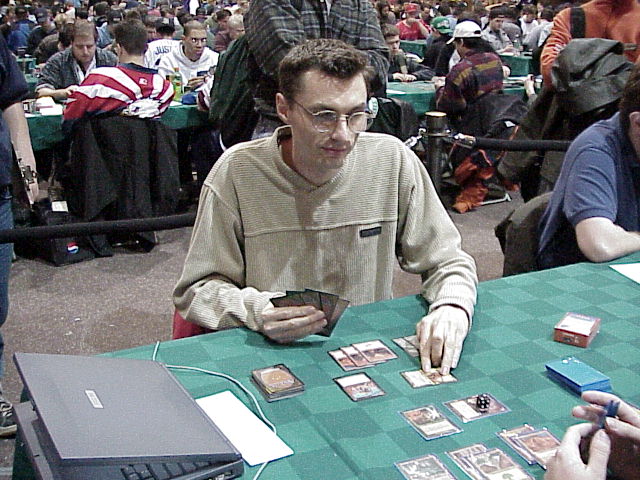 Johns opened with turn 3 Plague Spitter in game 2 followed by Harrow and Bog Down (with kicker!) on turn 4. Marsh played a Mire Kavu, which stared across the battlefield at Plague Spitter. Johns used a well-timed Scorching Lava to remove it and then served with the Spitter and a Pouncing Kavu. Marsh's Shivan Emissary got rid of the Kavu, but he never found an answer to the Spitter or the Nomadic Elf that Johns added to his army.