two colorful personalities, this match promised to be entertaining. The festivities started right off the bat with a friendly argument over which table to sit at in the feature match area, with both players just sitting down at their preferred tables and staring across the area at each other. A coin flip later and we were ready for action. 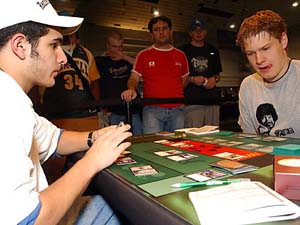 After arguing about seats, Gadiel and Paul got down to business.

For this draft, Paul Rietzl ended up with a 19-land special that sports a lot of power but is all over the map in terms of focus. As I walked by him in the deckbuilding area, he gestured me over, saying, "Look at this deck I drafted. It's all over the place! Those spells are my whole deck; it's got no idea what it wants to be. Beatdown, control, who knows what's coming out of this each game." Staring a bit at his deck's super-sized helping of mana, he could only smile. "Humphreys would be proud."

Here's how the decks shaped up:

1 Charge Across the Araba 3 Spiritual Visit

1 Honden of Seeing Winds 1 Charge Across the Araba

Rietzl started off quick with Sakura-Tribe Scout followed by Kitsune Loreweaver, but his draw went from aggressive to anemic when he missed his land drop on turn three, having to settle for a Child of Thorns. Turn four he played out Orochi Leafcaller and still had no land. Gadiel smirked at Paul's army of dorks and let out a less-than-genuine "wow" at the creature assortment he faced. Paul grimaced, pleading, "tell me you're missing this land drop. I'm playing 19 land, and I'm not kidding." 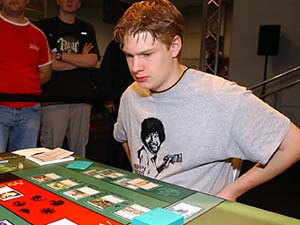 A couple turns later Paul finally managed to find land No. 3 and push Budoka Pupil into play, but his swarm of tiny beaters was seriously overmatched by Gadiel's team of double-white Shinen and Kami of Tattered Shoji, which kept swinging in backed up by Moonlit Strider. At one point it looked like Paul might stabilize when Honden of Seeing Winds came into play. Gadiel's team came in again, wiping out several of Paul's creatures, but Paul had one out left: if he could pull lands on both his draws that turn he could use the Scout to get both in play, use the Leafcaller for extra white, and smash out a phenomenal Myojin of Cleansing Fire.

But it wasn't to be, as his deck mocked him by not giving up even one land. Gadiel's team came in yet again, and Paul had to chump block with everything, forcing him into an unwinnable position.

This one started with a mulligan for Gadiel on the draw, but it was Paul making faces as he missed his third land drop for a second game in a row. A few turns later it was Gadiel complaining, however, as the ground stalled and Paul ripped three land in a row after missing his land drop on turn three.

The best Gadiel could do was swing for one a turn with Kami of the Waning Moon. Paul continued ripping land, going straight to eight mana with just one more miss, at which point he dropped out the mighty Myojin of Cleansing Fire. Myojin blew up the rest of the world and was joined by two new friends, but Gadiel had Death Denied to return his entire team to hand and start getting it back into play. However, Paul swung in and absolutely devastated his opponent's board with Charge Across the Araba for four, wiping out most of Gadiel's team (again) and dealing 8 damage to his life total as well. 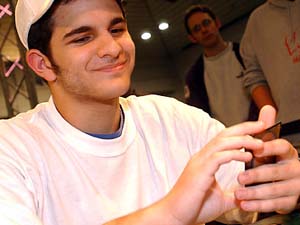 The Pro Tour-Philadelphia champ had reason to smile again.

Incredibly, Gadiel wasn't out, despite basically having all but one of his team wrathed away twice. He stabilized at a perilous 1 life with the help of Kabuto Moth and Split-Tail Miko, and began pumping out solid creatures while Paul's deck stalled completely.

A few turns later it was all over, and Paul could only shake his head. As the killing blow fell, Rietzl said something you don't hear often: "I just got outplayed."
When I checked with him afterward, he clarified that he felt he'd made three different significant mistakes. As he put it, "If I make any two of those, I probably still lose, but if I'd played the whole thing right I think it was mine to win."

Despite how many things had gone poorly for him in Game 1, Rietzl instead focused on what he could have done better, something that happens rarely and often sets the very best apart.