These well-known players were both on 3-0, but they couldn't remain unbeaten for long. Nicolas would be the first to admit that his deck was pretty poor, whereas Yann had managed to draft a very strong looking White-Green-Blue deck.

Nicolas played first but Yan had the first creatures, with a Sunscape Apprentice and then a Quirion Explorer. His Explorer was removed by an Assault, and Olivieri summoned a Thunderscape Apprentice, then gated it with a Hooded Kavu. Hamon's Harrow gave him blue mana, allowing him to cast a Galina's Knight and hold off the Kavu. 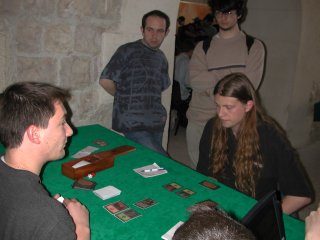 Still this was no reason for him to hold back, as he also held a Charging Troll, which he began to attack with. Olivieri chose not to block it with his Kavu because of the Sunscape Apprentice, but couldn't find anything to deal with it (not too surprising in a Red-Green deck). Nicolas drew a Swamp but didn't have any removal as his only Black card was Void, and the Troll continued to attack every turn. Hamon found a Crimson Acolyte to compound Nicolas's problems, as well as summoning a Thornscape Apprentice and a second Galina's Knight.

Nicolas draw was perhaps even worse in the second game, as he played a second turn Yavimaya Barbarian, and when it attacked he played Chaotic Strike on it. I can honestly say this is the first time I ever saw a player cast this spell, so congratulations to Nicolas. Yann played a Harrow on his third turn, followed by a Sunscape Apprentice, and then a Protection from Red Voice of All on the next turn.

The Barbarian couldn't get past this and with only two land in play all Nicolas could do was cast Thunderscape Familiar, then a second Yavimaya Barbarian, hardly a match for Yann's creatures, as he summoned a Charging Troll then a Glimmering Angel. The 4/4 Barbarian was totally useless as it couldn't get past the Voice of All or the Troll, and it couldn't block because of the Maniacal Rage.

Olivieri played nothing due to his mana screw, while Yann continued to play unblockable creatures. A Galina's Knight and a Razortooth Griffin caused Nicolas to concede, although his doom was sealed a long time before by the Charging Troll, as he had nothing in his deck to remove it.