Round 4: YMG vs. The Brockafellars 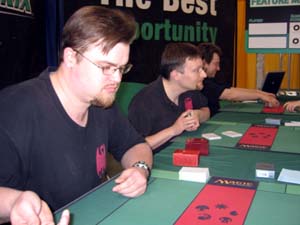 was no shortage of Team Limited success sitting down for the feature match. The newly remade Your Move Games squad was an amalgam of two of the most successful teams in the format's history. Two-thirds of the original team had a Pro Tour and Grand Prix under their belt--Rob and Darwin. Alex had experienced success in every area of the team format as one of the shadowy forces behind the Illuminati but with Justin Gary, Zvi Mowshowitz, and Dave Humphereys all unavailable for this event the remaining parts formed a new whole.

The Brockafellars were given the spotlight during the deck building portion and were the reigning Pro Tour champions of the Team Limited format. They chose to put all of their red cards into a mono-red monstrosity that was being wielded by Linde leaving the other two decks with little in the way of artifact destruction.

Alex led off with a Plains and there was a Bonesplitter from Brock. Alex's deck came online with a turn three Slith Ascendant. Brock made two soldier tokens EOT. He attacked for two and forged a Soldier Replica. Alex attacked for one and plopped an Auriok Glavemaster and Skyhunter Cub on the board.

Brock had no attack and played a foily Tel-Jilad Chosen leaving mana up to deal with the Slith via his Soldier Replica. Alex shrugged and played a Bonesplitter and Warhammer which merited the audible sigh from the artifact removal-light Parker. Alex passed the turn and Brock sent an equipped token and Chosen in for five points of damage. A Viridian Zealot made an appearance post-attack but Brock did not have any additional green to use it that turn.

Alex put the Splitter on his Ascendant and Warhammered the Glavemaster. Brock's Soldier Replica did the job it was recruited for sniping the Ascendant from the sky. Alex moved the Splitter over to his Cub. Brock attacked with everyone and the Cub ate the Chosen. Brock's Zealot took out the Bonesplitter and the Cub but still had to cope with a 5/2 first-striking Glavemaster with trample and Spirit Link. He summoned a Yotian Soldier and equipped it.

Alex attacked for another five and played Spikeshot Goblin and Vulshok Gauntlets. The Yotian beat for three on the next turn and was joined by a Slith Predator and Tangle Golem--Brock was tapped out. Alex sent in the Glavemaster and Brock had to put everyone in the way in the hopes of making it dead. When the dust settled Brock had a Yotian Soldier and two tokens. Alex played another Skyhunter Cub.

Brock reached for his sideboard and they were soon on to Game 2.

Rob and William were still locked in a Game 1 creature stall made more complicated by Fatespinner on the YMG side of the table but Linde was up a game on Darwin--apparently a 12/12 flying War Elemental was too much for Darwin to handle.

Brock quickly mulliganed his opening hand while Alex grinned at double Den-Guard, Warhammer, Roar of the Kha, and three lands. Brock had no play for the first three turns but Alex's Den-Guard and turn three Razor Golem kept Brock's fourth turn Yotian Solider busy. He rolled his eyes at the sight of the dreaded Warhammer.

Alex equipped the Den-Guard but his opponent had a Blinding Beam to buy some time. Brock's Loxodon Mystic hit the table and threatened to negate the Warhammer. Alex had plenty of other action and made a Slith Ascendant and Auriok Glavemaster. He was content to beat for one the next turn after the Den-Guard was tapped. Another Loxodon Mystic made an appearance--this time on the YMG side of the board and Brock looked perturbed.

He made a Viridian Longbow and handed it to his Soldier. Alex played a Bonesplitter and when he moved it to his Glavemaster, Brock shot it in response. Alex moved it to his Razor Golem and Brock frowned at all the land he had in play--almost as many lands as Alex had creatures. Once he saw that Alex was not going to forget to attack--he was bluffing Tangle Spider--Brock conceded the game and the match.

Darwin lost the second game to Linde's mono-red monstrosity in pretty short order. YMG had to hope that Rob could close the deal after taking Game 1 from Huey.

Rob found himself racing a Darksteel Gargoyle and Viridian Longbow with his Lightning Greaved Neurok Spy and Sun Droplet. Rob's deck was slow and controlling and if he lost this game forcing a third it would likely mean a draw for the two teams.

Rob's Myr Enforcer gladly took the Greaves and ate a chump-blocking Neurok Familiar. Rob moved the Greaves back to his evasion creature after the attack and Huey was able to kill the Enforcer on his next turn with Irradiate.

Rob's Sun Droplet kept shining in this match and he looked to take control of the game with an Icy Manipulator that could tap the Gargoyle. He chose not to tap anything in order to activate his Stalking Stones but Jensen decided not to attack. Jensen found a Neurok Prodigy on top of his deck but it offered little help--neither did the Behemoth he played on the next turn.

Rob played Crystal Shard as insurance for his meager army. Huey's continued to mount though and he played a Somber Hovergaurd after Rob took four from a Behemoth. Rob continued to tap the Gargoyle but had to take five from the fliers. Rob used his Steel Wall to block and bounced it with his Shard. Huey attempted a Wizard Replica but Rob had an Annul. 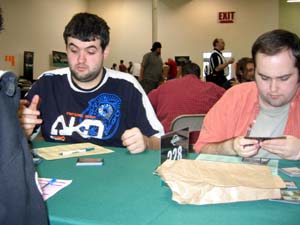 Rob continued to whittle away his opponent's life total with the Spy but his life total was finally in retrograde from the mounting pressure of Huey's deck. They repeated the same attack step from the previous turn and Rob fell to seven--with thirteen counters on the Droplet. Huey was low on life and used a Seat of the Synod to pick up and replay the Prodigy as well as the Behemoth post attack.

Rob dropped Jensen to two and played Wizard Replica and Steel Wall. Huey had no outs and extended his hand to the victorious Dougherty. With no artifact removal in his deck he could not cope with Rob's assortment of powerful artifacts--Crystal Shard, Icy Manipulator, or the deceptively potent Sun Droplet.

2 Roar of the Kha 1 Electrostatic Bolt