Round 4: Your Move Games vs. Illuminati

This is the last matchup both teams wanted at this point. Your Move Games and Illuminati represent the core of the YMG squad, and both came into Round 4 with 1-2 records, meaning that the loser here would not be able to play tomorrow. It's an odd situation for either team, as they've both been incredibly successful in this format in the past.

Justin, who is attending law school, said, "Well, I knew my Magic career was coming to an end, or slowing down, but I didn't think it would happen so quickly."

Rob wanted to get in a "Hi Krista!" while he was still in the tournament.

Justin opened with Deftblade Elite, and Rob had the perfect answer in Festering Goblin. Rob spoke for the Goblin and begged the Elite to attack, but Justin simply played Battlefield Medic and ended his turn. "Uncle Fester" attacked for a point of damage, and Justin continued his curve with Gustcloak Harrier. It was able to get through for 2 points of damage every turn, until Rob's Hollow Specter forced him to stay back on defense. Noxious Ghoul and Death Pulse took a sizeable chunk out of Justin's army, but he rebuilt with Aven Redeemer and Gustcloak Skirmisher. Just when things seemed back to even, Dougherty used Infest to annihilate Justin's side and win.

Meanwhile, Darwin had a great opening, curving out with Deftblade Elite, Silver Knight, and a morph. Zvi had Stonewood Invoker, Wellwisher and a morph, but Darwin put plenty of pressure in the air thanks to Ascending Aven and Gustcloak Harrier. A morph did flip over to reveal Spitting Gourna but it was too late, as Darwin was able to force through enough damage to take the first game. 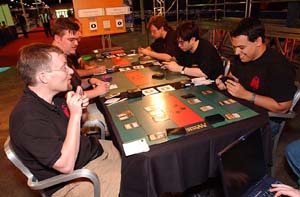 Alex struggled to withstand and nullify Dave's Beasts and was able to bring the game to parity, and put Clutch of Undeath on his Shepard of Rot to get a 4/4. Dave unmorphed Hystrodon, and used Accelerated Mutation to bust through.

Zvi's next draw was much better, as he had out Wirewood Elf, Timberwatch Elf, Wirewood Savage, and Spitting Gourna a turn early thanks to the Elf acceleration. Kastle kept pace to the best of his ability, taking care of the Timberwatch with Frozen Solid and playing Dragon Scales on his Mistform Dreamer. A couple of morphs followed to make the board even, and Kastle played out Aven Fateshaper to give him a way to get through the Gourna in the air. This left him tapped out, however, and Zvi used Vitality Charm to force through lethal damage as Darwin revealed Echo Tracer and Frontline Strategist, lacking the mana to activate either.

Game 2 looked better for Alex, as he played Crypt Sliver, Smokespew Invoker, and Mistform Shrieker. Dave had Starstorm to clear the board, but Alex rebuilt with Covert Operative and Shoreline Ranger. Dave still had the answers, Shocking the Operative and using Pinpoint Avalanche to kill the Ranger as Alex simply shook his head. Dave played Gempalm Strider and Elven Riders, as Alex yet again rebuilt his team with a morph and Spectral Sliver. Spitting Gourna gave Dave some defense on the ground, but Alex had enough mana to pump his Sliver and attack through it. Dave swung back with his whole team, and Alex blocked the Strider with a morph and flipped it over to reveal Echo Tracer, getting some tempo advantage back. It didn't matter, as Elven Riders finished the job to put Your Move Games up a match.

In game 3, Darwin used Piety Charm to kill a 3/3 Canopy Crawler before it could become active. Sandskin nullified an Elvish Aberration, and Darwin summoned Covert Operative while Zvi played Timberwatch Elf. Glowering Rogon came down as a 6/6 and was stopped with another Sandskin, but the Operative was less threatening thanks to Zvi's Wirewood Lodge - Wellwisher combo. This gave Zvi the time he needed to play more Beasts, while Darwin had a hard time keeping up, especially with an active Timberwatch Elf making combat impossible. The outcome here was inevitable, leaving the decision of match to Rob and Justin.

Justin used Aven Redeemer to keep Rob's creatures back, and seemed to have the card he needed in Gustcloak Savior, but it was killed with Skinthinner. A few turns later, Rob's board position was dominant thanks to Shieldmage Elder, Noble Templar, and Daunting Defender making his Clerics great in combat. Zealous Inquisitor and Daru Healer gave the Elder even more Clerics, allowing multiple activations in combat and making life extremely difficult for Justin. To make matters worse, Justin was still lacking a Mountain, and couldn't mount much of a defense, much less any successful attacks of his own. Celestial Gatekeeper gave him a chance, as he used it to block during Rob's next attack and brought back Noble Templar and Gustcloak Savior. He still couldn't afford to attack and weaken his defense, so he just played Daru Lancer and said go.

Infernal Caretaker unmorphed on end step to bring back Skinthinner, and Justin finally drew a Mountain. After expressing some sarcastic shock over finally drawing his second color mana, he summoned Flamewave Invoker. The Skinthinner killed the Savior, and Rob attacked with Noble Templar and Daunting Defender. Justin blocked the Templar with his own, and the other six creatures all blocked the Defender. This attack caused the Defender to head to the graveyard, and Rob didn't force through any damage. Justin drew the land he needed and forcefully played Akroma, but thanks to Shieldmage Advocate the Angel was taken care of. The clock was now down to five minutes and Rob was up one game to none, so Justin had to win. He started activating the Invoker on end step and following up with Akroma attacks, but the Elder was able to deal with that. Lacking any other options, he attacked with most of his team. This dealt some damage and tapped down all of Rob's creatures, and Justin followed up by killing the board-dominating Elder with Chain of Plasma, and summoning Crowd Favorites.

At this point time was called. Rob was up a game, but it seemed that Justin could win in extra turns, which would make the match a draw--a scenario neither team wanted. Infest cleared the table of the smaller creatures, and Rob followed with Noxious Ghoul and Festering Goblin to kill all of Justin's creatures but Akroma, which was enchanted with Guilty Conscience. This got a shock out of Zvi and Alex watching from the sidelines, but Justin had an answer waiting in the form of Piety Charm, which destroyed the Conscience and allowed Akroma to attack.

At this point, extra turns finished up, and Justin clearly had the game won, which would force a draw and knock both teams out. So, they went about figuring out who was going to concede. They first asked if they could increase their prize split from 30 perecent to 50 percecnt. The odd thing here is that any sort of money being offered in a concession situation is bribery, but the teams argued that with an even 50/50 split, money wouldn't be a factor at all in the concession decision. On the other hand, the previous 30 percent split would provide the team that stayed in with a chance to make more money. The ruling was that changing the split before the concession was illegal, but any sort of split could be negotiated afterwards. After some more argument with the ruling, the six players involved brushed off the issue.

The argument centered on the fact that Rob needs pro points and is in danger of falling off the Pro Tour. Darwin added his own two cents, noting to Justin, "Rob would have played better if you weren't rushing him, but that's fine." Justin admitted that with three minutes left, Rob could have slow played the game and won the match, but didn't. The players on Your Move Games admitted that Illuminati had a better chance to do well since they prepared more, but even a few pro points would help Rob immensely. Zvi and Alex argued that they were a few pro points short of making the New Orleans Masters $2,000 payout (done as compensation for removal of the Masters Series), but Rob pointed out that Dave actually needed fewer points to qualify for that himself. After some more discussion, it was decided that keeping Rob on the Pro Tour was the most important factor, so Illuminati conceded.