Round 4: Zach Parker vs. Marco Blume

It's David and Goliath in more than one sense this round. In addition to the obvious size differential, Marco Blume is a cornerstone of the mighty Phoenix Foundation and a solid player in his own right, often seen topping the standings at European Grand Prix. Parker is just starting to gear up his singles game, having been on the Tour for a while. Earlier this season he recorded his best finish to date: 37th at Chicago. Parker was not optimistic of his chances in the role of David.

"We played seven games and he beat me 6-1. How lucky for Zach!" – Zach Parker

Parker is playing a strange homebrew green-red goblins deck, but only because he doesn't like the format and lent out his Wake deck. Blume brought his own Wake, and so wasn't forced to play anything crazy. At the other Feature Match, Brian Kibler cheered him on, getting ready to tackle Tony Tsai. 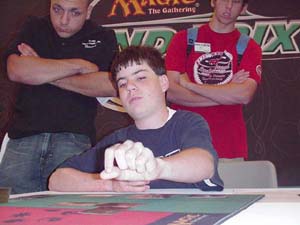 They shuffled and drew their opening hands.

"Draw eight. That's the only way I can win." – Zach Parker

Parker led with Goblin Sledder and tried a second-turn Goblin Piledriver. Blume shook his head and put Mana Leak on the table. Next turn a Wild Mongrel went uncontested, and Blume got a Renewed Faith from his board with Cunning Wish. Parker hit for three and played his two Hammers. Blume cycled his Faith in response to the second one, but let it resolve, falling to eleven.

He untapped and played Wrath of God. Parker scooped up his dudes. He replaced his Mongrel while Blume played out a land. He hit in for three, pitching a land and Blume let it happen. He tried again on the next turn, but Moment's Peace shut him down. That left Parker with just one card in hand. Blume took the opportunity to tap out and make a pair of Angels with Decree of Justice. Parker dropped a Blistering Firecat and swung in. Blume accepted falling to one without hesitation.

"It's no fair! He knows my decklist!" – Zach Parker

Blume hit in the air for four, holding back some defense. Parker morphed a Firecat, but Blume simple sent Circular Logic through Compulsion. He hit for eight and sat on a ton of mana. Parker attacked into the Peace, and then scooped.

Parker had no first turn play, but Blume was on a slow mana draw with Verge and then Elfhame Palace. Parker played a second-turn Goblin Piledriver, and on the third turn triumphantly dropped an Elephant Guide. 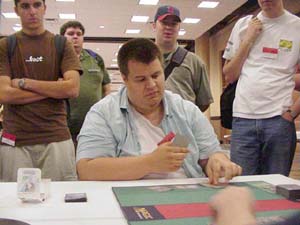 Blume played a morph and watched as Parker played a second Guide, turning his Piledriver into a huge beatstick. Blume calmly unmorphed his Angel and served climbing to thirteen. Parker didn't have the Firecat for the win, having to resign himself to dealing seven and adding a Goblin Sharpshooter.

Blume drained for four and played a Brushhopper. Parker's attack cost him a Deep Analysis and a Wake, but that was fine. Unfortunately, Parker had Goblin Grappler ready to push through more damage. Blume made no move on his turn, and looked like he would take some pain. The Brushhopper was forced to tangle with the Grappler, but Blume wasn't out of tricks. Cunning Wish fetched Ray of Revelation from the sideboard, and Parker visibly sagged in his chair.

With both Guides dispatched, the Piledriver dealt only three. Sharpshooter pinged for one, but Blume had everything in hand now. Parker made a Mongrel and a Caller of the Claw, adding a bear to the board. Blume dropped Wake and swung in for five, then played Moment's Peace as the final nail in the coffin.