Round 4: Zvi Mowshowitz vs. Justin Gary

Both players have proven themselves on the Constructed front, each with a Pro Tour title under their long list of accomplishments. Now, both players are pitted against each other in the Limited arena. Previous ‘testing’ supposedly gave Mowshowitz the advantage, a factoid that’ll only be confirmed here in the Feature Match arena. Random chatter, interspersed with bursts of Zvi’s idiosyncratic laughter opened up the first game. Clearly, neither player was particularly happy with having to play each other in their first round of competition, but sometimes these things are beyond the players’ control. 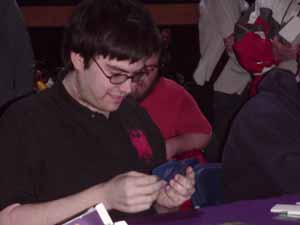 Choosing to draw first, Gary’s mana base took a bump up with a Wirewood Elf, while Mowshowitz began the onslaught with the first morph of the match. That was met the next turn with Gary’s own morph. The mirror madness continued, this time with Invokers- Flamewave for Mowshowitz, Stonewood for Gary. Now that the board had more or less settled down, Mowshowitz took a rare pause, before passing the turn. Gary too, had several thoughts of his own, eventually settled upon letting his morph go into the fray. Mowshowitz blocked with the Invoker, then once Gary put damage on the stack, Mowshowitz turned his Chromeshell Crab face up, switching his to-be-dead Invoker for Gary’s not-yet-dead Invoker.

Then in came the beasts. Feral Throwback came in for Gary (unfortunately, regular-sized), while Mowshowitz matched that by playing a Krosan Tusker the way it isn’t normally played. (You know, actually going through tapping seven lands…) Birchlore Rangers finally gave Gary access to a second source of black mana, to which he used to play a Withered Wretch, that contributed to the overall size of his Soulless One. The One started to grow. Obviously trying to finish things quickly, Mowshowitz sent the crew in. With eight mana up, the Stonewood Invoker now created additional headaches for Gary, who at twelve life, really couldn’t afford to take too many hits. The Wretch and Soulless One took down the Tusker, while the Throwback traded with the Crab. The Invoker hit Gary for two, then Mowshowitz tapped seven.

The pieces were crumbling around him. Gary took a while to think, before passing the turn. Cycling a Gempalm Polluter gave no real answers to the board, and when Mowshowitz played a second Invoker, things looked down. Fortunately, big, green legends in the form of Silvos hit the table to stop the Invoker madness, but still left the Hundroog to go through, bringing Gary down to two. Silvos probably could’ve stabilised the board, that it, if it weren’t for Mowshowitz’s Erratic Explosion aimed at the head.

Mowshowitz: “I am going to try and kill you!”
Gary: “Then, good luck!”

The first card flipped over was more than enough to finish the job.

Gary pondered for a bit before looking at his seven cards, finally settling upon “I still want to draw.” Fortunately, Mowshowitz was unable to take advantage of going first, cycling a Keeneye Aven under the premise of, “I swear I have never cast this card before.” Shepherd of Rot from Gary was met with Wellwisher from Mowshowitz. 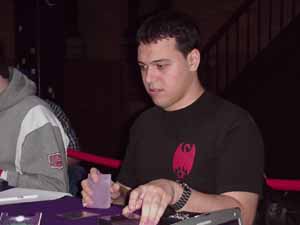 Krosan Vorine gave Gary the opportunity to off Mowshowitz’s Wellwisher, but “before you pick off my Wellwisher, I’m going to pick off that guy,” said Mowshowitz before provoking the Vorine with a Crested Craghorn. Still, Mowshowitz’s board position looked rather bare, holding just a Wellwisher compared to Gary’s Shepherd and two face down creatures. A Glowering Rogon, amplified once turned the tables around, and now the game looked to be swinging back in Mowshowitz’s favour. Things looked bad for Gary when an attempted double-block with the Shepherd and a morphed-up Fallen Cleric tried to take down the Rogon, but Vitality Charm from Mowshowitz was about as bad as it can get. Krosan Groundshaker made things even worse. A Wretched Anurid and a morph took down the Rogon, and Gary’s focus now shifted to the other monster in play.

“This is not looking good…yet again.” – Justin Gary

Infernal Caretaker returned four Zombies back to Gary’s hand, ready to queue up in line to be run over by the Groundshaker. Still, the Fallen Cleric and Wretched Anurid was enough to stop the Groundshaker, but the Anurid would slowly chip away. Needleshot Gourna and Stonewood Invoker came in on Mowshowitz side, and Gary was probably wondering if things could just get only a little bit smaller. Like, maybe not so many ‘6’s and ‘7’s on the bottom right hand corner of things.

Aphetto Vulture and Wall of Mulch entered play to try and hold off things for as long as it could. The Anurid brought Gary down to six points to play with. Mowshowitz served with the lot.

“Okay, I think I planned for this.”

Beasts and Zombies leapt into the fray. Blows were made, beasts trampled while the undead ate away at the living. In the end, the Gourna and Invoker stood alive on Mowshowitz’s side of the board, matched only by a lone Wall of Mulch from Gary. Soulless One came into play as a 5/5. Two more Zombies needed before it could take down the Invoker. Fortunately, Gary’s hand was chock full of Zombies (no thanks to the Caretaker). The only real question that needed to be answered was how to actually go about things. In the end, Withered Wretch and Gempalm Polluter came into play, and the Soulless One was now 7/7. Gary held Silvos in hand, but lacked a third source of green. Still, things were starting to brighten up. Okay, so maybe the life totals stood at 25 to 4, in Mowshowitz’s favour with a Wellwisher in play, but still! Three zombies traded with the Invoker, and now Soulless “Mr. Pressure Guy” One came in. The One hit for seven, and Gary solidified up his defense with a Wirewood Savage and his own Stonewood Invoker. Zvi’s grip help just Slice and Dice. When the next draw revealed Symbiotic Elf, the game was sealed then and there. With Gary unable to pump his Invoker, Zvi tapped ten, and cast Symbiotic Elf and Slice and Dice in succession. The resulting Insects and Gourna was enough to swarm through Gary’s appropriately named “One”, finishing the job.